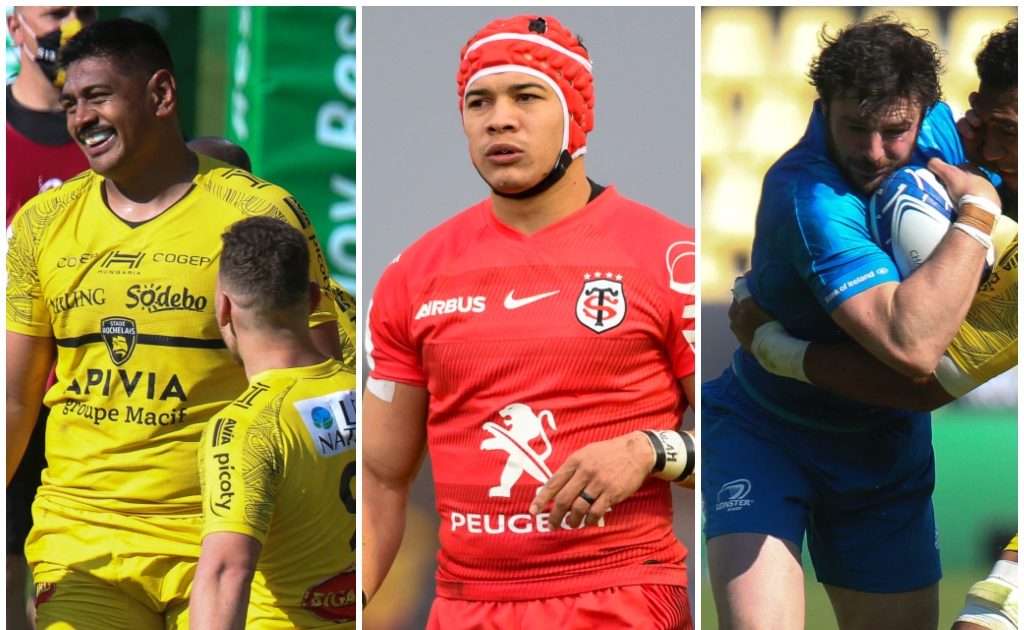 Now that the dust has settled on the Champions Cup semi-finals, we have gone through the action to pick the best players from the weekend’s games.

Unsurprisingly, the two victors from the weekend, La Rochelle and Toulouse, dominate the XV, but there were also some impressive individual showings from Leinster and Bordeaux-Begles.

15 Brice Dulin (La Rochelle): It wasn’t a vintage weekend for the full-backs but the La Rochelle man played a key role in their semi-final triumph over Leinster. The Irish province had started well and held a 13-9 lead after 30 minutes, but Dulin’s piece of individual skill, where he chipped over the top and recollected, got his side on the front foot. It altered the momentum going into the break, with his team wrestling control of the encounter in the second period. Dulin also worked well in tandem with back three colleagues Dillyn Leyds and Raymond Rhule as he takes the slot from opposite number Hugo Keenan and Toulouse’s Maxime Medard.

14 Romain Buros (Bordeaux-Begles): Christophe Urios’ men played pretty well in the first half of their encounter with Toulouse and a lot of it was down to their control of field position. In-form half-backs Maxime Lucu and Matthieu Jalibert played a part in that but they were also indebted to Buros, who dominated the air. He usually plays at full-back but was switched to the wing for this game and impressed, claiming a number of high balls, while he also made metres with ball in hand when the opportunity arose.

13 Robbie Henshaw (Leinster): Geoffrey Doumayrou had his moments for La Rochelle, while Zack Holmes provided the assist for both of Toulouse’s tries on Saturday but did little outside of that. We have therefore moved Henshaw to the 13 channel after his fine display on Sunday. Once again, the Ireland international was tireless in attack and defence, and was one of the few Leinster players to stand up against the La Rochelle onslaught.

12 Pita Ahki (Toulouse): The former New Zealand U20 star never quite fulfilled his undoubted potential back in his homeland, but he has become a crucial cog in the Toulouse midfield. Ahki has always had the athletic qualities to succeed at the highest level but it’s his decision-making and defensive capabilities which has turned him into one of the finest all-round centres in Europe. The 28-year-old passes superbly off both hands, marshals the backline excellently and links well with outstanding French playmakers Romain Ntamack and Antoine Dupont. He deservedly took the man of the match award on Saturday following a superb display in the win over UBB.

11 Cheslin Kolbe (Toulouse): We had to find a place for the elusive South African back, so we moved him onto the opposite wing to get in ahead of team-mate Matthis Lebel. With the rain pouring down prior to kick-off and during most of the first half on Saturday, it wasn’t really a game for the speedsters but Kolbe still found a way to shine. His wonderful footwork was particularly in evidence in the second period as Les Rouge et Noir showed their quality after the break.

Final bound with the brother's 🔴⚫ pic.twitter.com/WcjkGIwr4p

10 Ihaia West (La Rochelle): French stars Ntamack and Jalibert went toe-to-toe on Saturday, but it was an in-form New Zealander that shined brightest. Like Ahki, West never truly found his place in Super Rugby, but has thrived under the tutelage of head coach Ronan O’Gara. He has found the composure to go with his playmaking abilities and controlled the game superbly against the four-time European champions.

9 Tawera Kerr-Barlow (La Rochelle): This was a tough call with Dupont typically influential for Toulouse and Maxime Lucu also impressing for Bordeaux-Begles, but Kerr-Barlow was simply outstanding for Jono Gibbes’ men. The scrum-half dictated the pace of the game in the second period and was a threat around the fringes to outplay opposite number Luke McGrath. Leinster did try to put pressure on the La Rochelle nine throughout but the New Zealander had all the answers.

8 Victor Vito (La Rochelle): Another tough decision, between two former All Blacks, with Jerome Kaino running Vito close after a strong performance for Toulouse but Vito edges him after an excellent all-round display in his side’s triumph over Leinster. He ran hard, gaining 27 metres on attack from six carries which included a clean break and an offload, and also shone on defence with a team-high 16 tackles without missing one.

7 Josh van der Flier (Leinster): Although Leinster were outplayed in most facets of play, the Ireland international was outstanding throughout and put up a gallant display in a losing cause. The 28-year-old caught the eye with a strong performance in the breakdown battle and was rewarded with a turnover, but made his biggest impact on defence where he made a match-high 17 hits.

6 Gregory Alldritt (La Rochelle): The France international’s fine form continued as he was in the thick of the action against Leinster. Alldritt’s attacking prowess has been well documented and he continued to impress in that department as he gained 35 metres from 21 runs and also managed an offload. Added to that, his defence was strong as he made nine tackles.

5 Will Skelton (La Rochelle): The Wallaby powerhouse came to the fore with an outstanding performance and did well to keep several opponents busy when he took the ball into contact. Skelton proved difficult to stop on attack, eventually gaining 42 metres from 11 carries, but also shone in the execution of his defensive duties where he completed nine tackles and also won a crucial turnover.

4 Richie Arnold (Toulouse): Another Australian in our second-row, Arnold came to the fore with a solid showing as Toulouse’s forwards got the better of their Leinster counterparts with a superb effort. The 30-year-old did what was expected of him in the lineouts, was a willing ball carrier but made his biggest impact on defence where he finished with 16 tackles.

3 Charlie Faumuina (Toulouse): The front-row battle in the Toulouse v Bordeaux-Begles game was a tough one and the All Black did his bit for his side with a strong shift. The 34-year-old caught the eye with a solid scrummaging display, did well on defence with 12 hits but also impressed as a ball carrier and managed three offloads. La Rochelle’s Uini Atonio and Leinster’s Tadhg Furlong were next best.

2 Pierre Bourgarit (La Rochelle): La Rochelle’s forwards deserve plenty of credit for getting the better of their much vaunted opponents and Bourgarit is the French outfit’s fourth representative in our pack. The 23-year-old delivered a busy shift, making 33 metres on attack from nine runs which included one clean break and an offload. He also impressed on defence with nine tackles and comes in ahead of Julien Marchand of Toulouse and Maxime Lamothe of UBB.

1 Cyril Baille (Toulouse): The France international was forced off the field through injury midway through the second half against Bordeaux but by that time he had already left his stamp on the match with a fine performance. Baille was strong in the implementation of his core duties, especially his scrummaging, and did well in defence with 11 hits.