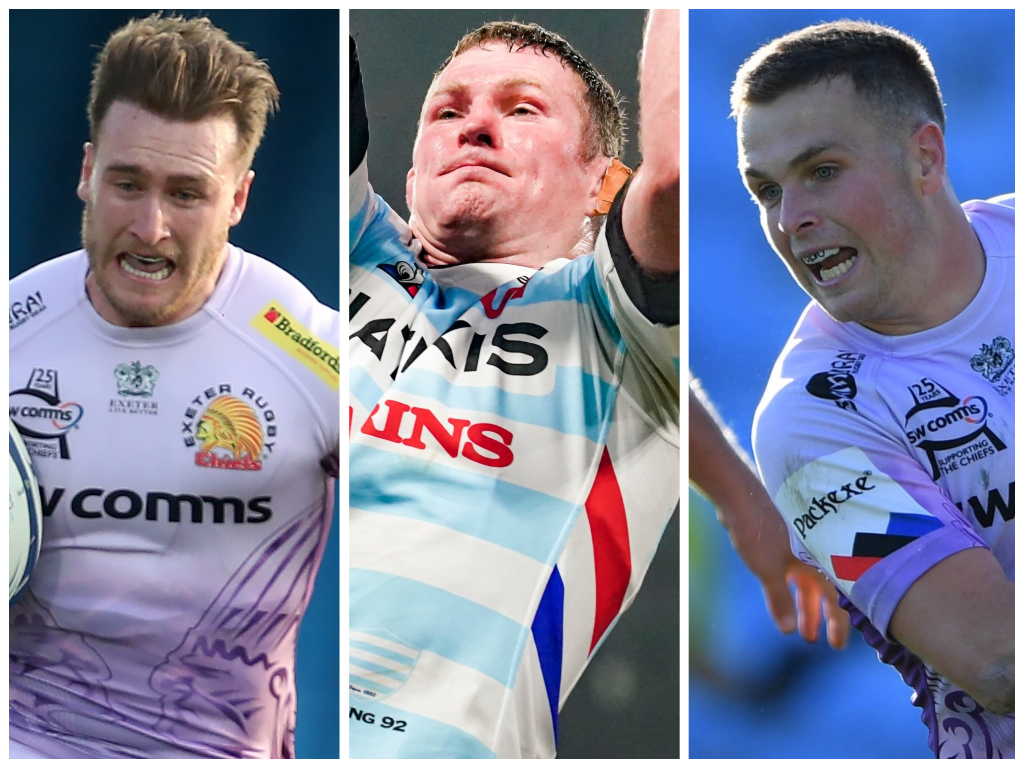 Now that the dust has settled on the semi-finals of the Champions Cup, we have gone through the action to pick the best players from the games.

Exeter Chiefs lead the way with eight representatives in the side while next best is Racing 92 and Toulouse, who have three players named this Monday.

15 Stuart Hogg (Exeter Chiefs): As the television commentator said on Saturday, these are the matches why Hogg moved to Sandy Park. The Scotland full-back deserves to play on the biggest of stage and against Toulouse he had just that and he put in an impressive shift. Hogg finished that entertaining semi-final with five defenders beaten and was solid throughout, seeing off Elliot Daly for this jersey, the Saracens player making many smart decisions in Paris.

14 Jack Nowell (Exeter Chiefs): Tough to leave out Cheslin Kolbe after another busy performance for Toulouse, but we just felt Nowell was on great form for the Chiefs. Such a difficult man to put to ground, he caused Toulouse plenty of problems whenever he got the ball. He was also solid in defence and at ruck time as he proved once again what a jack of all trades he is. The England star made 10 carries for 48 metres and kept Yoann Huget unusually quiet.

13 Virimi Vakatawa (Racing 92): What a specimen the big centre is and Saracens found out the hard way at times as Vakatawa was a handful every time he touched the ball. He finished with a match high 72 metres and that smart play which led to the crucial late try could not have happened without his power and speed. Mentions go to the Chiefs’ calming presence, Henry Slade, and Dom Morris, who was outstanding coming off the bench for Saracens.

12 Pita Ahki (Toulouse): This was a difficult call as Ian Whitten yet again showed his value to Exeter with a hard-working and intelligent showing, while Olivier Klemenczak did well for Racing 92. However, we could not ignore one of the form players in the Champions Cup this season, Ahki, as his dynamism in the carry once again stood out. He set up both of Toulouse’s crossings at Sandy Park and was desperately unlucky to finish on the losing side in Devon.

11 Tom O’Flaherty (Exeter Chiefs): Not one of Exeter’s household names but those who have been watching O’Flaherty’s progress in recent years will be unsurprised to see him right at home at this level. The fleet-footed wing was incredibly busy against Toulouse, finishing with a game high 75 metres, as he popped up all over the field at Sandy Park. He edges out reliable Saracen Sean Maitland and Racing 92’s Juan Imhoff, who scored that vital late try.

Tom O’Flaherty gets home tonight and empties his pockets.

10 Joe Simmonds (Exeter Chiefs): It’s strange that a fly-half for one of the top two teams in England over the last five years rarely gets spoken about for international honours. However, one feels that might soon change as, with the added responsibility of the Exeter captaincy and maturity in his game, Simmonds is showing that he belongs at the highest level. A 13-point haul that included a try sees him get the nod here ahead of Racing 92’s Finn Russell.

9 Antoine Dupont (Toulouse): Not a hotly-contested shirt after the semi-finals as the four nines struggled to press their games on their opposing teams. Richard Wigglesworth kicked well once again but Dupont was his only rival for the jersey, with his speed at the breakdown and general threat with ball in hand keeping Exeter on their toes. The France international really is a joy to watch and his club, country and the neutral hopes he remains injury free.

8 Sam Simmonds (Exeter Chiefs): The England international makes our team for the second week in a row after another superb game in Exeter’s victory at Sandy Park. Simmonds was busy throughout, gaining 25 attacking metres from 14 runs which included three defenders beaten an offload and he also scored a crucial try just before half-time. Simmonds also did well on defence with 11 hits and comes in ahead of Billy Vunipola and Selevasio Tolofua.

7 Wenceslas Lauret (Racing 92): This was a tough decision as Exeter Chiefs’ Sam Skinner also played well in his team’s home triumph against Toulouse, but Lauret gets the nod after another solid outing. He did well with ball in hand, gaining 26 metres from eight runs and finished with four defenders beaten. Lauret also made a nuisance of himself at the breakdowns and impressed on defence where he made nine tackles against Sarries on Saturday.

6 Dave Ewers (Exeter Chiefs): The Devon-based outfit’s entire back-row had excellent games and Ewers deserves special praise as he was one of his team’s unsung heroes against Toulouse. He competed well on the ground and was particularly effective in defence where his ability to halt Toulouse’s attacking momentum proved crucial in securing their win and he ended with a game-high 17 tackles. Toulouse’s Jerome Kaino was also in fine form.

Thanks @StadeToulousain for a proper battle. Proud of the boys 🏉 pic.twitter.com/0dKXnoxmdL

5 Jonny Hill (Exeter Chiefs): The 26-year-old’s stock continues to rise and his efforts in the Chiefs’ semi-final victorywas outstanding during his 67 minutes on the field. The 2018 England tourist did what was expected of him in the lineouts, gained 21 attacking metres and was one of his team’s best defenders, finishing with 14 hits.

4 Donnacha Ryan (Racing 92): The Ireland stalwart came to the fore with a solid display at the coalface of the Parisian outfit’s forward effort and had a few key moments in a tight encounter, one of which was winning a breakdown penalty just before being replaced in the 69th minute. Ryan’s leadership and experience was vital and he also impressed on defence with six tackles, most of which were made at close quarters. Exeter’s Jonny Gray was next best.

3 Harry Williams (Exeter Chiefs): One of the star performers in Exeter’s memorable victory over Toulouse after an excellent all-round performance. Although he did not do lots of ball carrying, the 28-year-old scored two well-taken tries from close quarters which proved to be the difference between the sides in the end. Williams also did his bit on defence and eventually completed 12 hits.

2 Julien Marchand (Toulouse): Another difficult decision with Racing 92’s Camille Chat also showing his worth against Saracens but Marchand books his spot in our selection after a fine effort for Toulouse in a losing cause against Exeter. He was a willing ball carrier but also put his body on the line in the execution of his defensive duties and finished with seven tackles made.

1 Mako Vunipola (Saracens): The England front-rower emptied the tank during a solid 73-minute spell in Paris and was unlucky to finish on the losing side. Although he was on the back foot in the scrums during the latter stages of the second half, Vunipola’s overall display caught the eye. He did well on attack, gaining 17 metres from seven carries which included two clean breaks and four defenders beaten, and also put in a good defensive shift with seven tackles. He beats out Racing 92’s Eddy Ben Arous, Cyril Baille of Toulouse and Alec Hepburn of Exeter.