Home Premiership Bath Team of the Week: Champions Cup, Round One 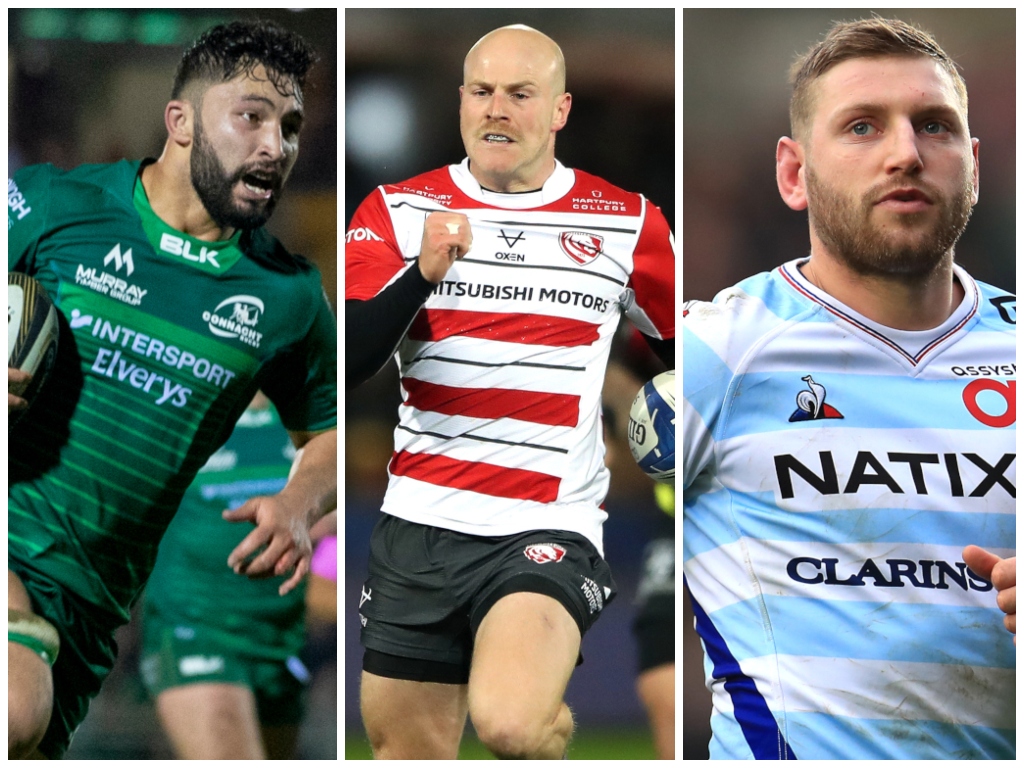 Now that the dust has settled on Round One of the Champions Cup, we’ve gone through the action to pick the best players from the opening games.

After defeating defending champions Saracens with a free-flowing display, Racing 92 have four players included, while Clermont Auvergne and Connacht are also well represented. Be sure to comment and also leave your own line-up in the comments section below.

Team of the Week: Champions Cup, Round One

15 Brice Dulin (Racing 92): Dominated the air against Saracens as, Sean Maitland apart, the hosts put pressure on an inexperienced back three. Dulin was also dangerous with ball in hand, making 96 metres, which included two clean breaks and five defenders beaten. As a result, he takes the position from Munster’s Mike Haley, who was a rock at the back, and the excellent Thomas Ramos (Toulouse).

14 Tom O’Flaherty (Exeter Chiefs): Over the past year, the wing has become a key part of the Exeter backline and showed why with a superb performance against La Rochelle. O’Flaherty is a well balanced runner with nifty footwork and that allows him to get out of tight situations and finish tries others wouldn’t. That was displayed on Saturday as he took the ball out wide from Joe Simmonds’ looping pass, stepped inside Ihaia West, and held off the cover defence to score. Elsewhere, Andrew Conway continued his fine form for Munster while Teddy Thomas was always a threat for Racing.

13 Virimi Vakatawa (Racing 92): It took a lot to unseat hat-trick hero Garry Ringrose from this position, but that’s what Vakatawa did. Although Ringrose was outstanding for Leinster, the Racing man put in a complete performance as he continually struck fear into the Sarries defence. His lines of running and off-loading ability was impossible to contain for the defending champions, while he also won two turnovers at the breakdown.

12 Sam Johnson (Glasgow Warriors): This is very tough on Clermont Auvergne’s George Moala, who enjoyed barrelling through Harlequins’ flimsy defence, but Johnson was crucial to Glasgow’s victory over Sale. As well as the wonderful off-load which sent DTH van der Merwe over for the decisive score, Johnson linked nicely with fly-half Adam Hastings and caused problems for the Sharks rearguard. The Scotland international was also solid on defence and completed 10 tackles without missing any.

With all their World Cup stars firing, could @GlasgowWarriors be contenders for the #HeinekenChampionsCup crown? 👑 pic.twitter.com/43DgOHytfd

11 Alivereti Raka (Clermont Auvergne): One of the few clear front-runners with Raka looking in fine fettle against Harlequins. Injury has disrupted the Fijian-born wing over the last couple of years but, following a full pre-season which helped him impress for France at the World Cup, the 24-year-old is back to his best. The Auvergne flyer tormented Quins and ended the game with two tries, 105 metres ran and four clean breaks as he took the place from Arthur Retiere, who was one of La Rochelle’s few bright sparks.

10 Finn Russell (Racing 92): There were some good displays in the pivot position with Toulouse’s Romain Ntamack changing the course of their game when moving to fly-half in the second half against Gloucester, while Adam Hastings (Glasgow), Camille Lopez (Clermont) and Johnny Sexton (Leinster) also played well, but we’ve gone for Russell. With the pack laying an excellent platform, the Scotland player was in typically superb form and showed his vast array of skills, which saw him score a well-worked try and beat nine defenders.

9 Joe Simpson (Gloucester): Individuals like Exeter’s Nic White, Ulster’s John Cooney and Connacht’s Caolin Blade all contributed significantly to their team’s wins, but we couldn’t ignore the Gloucester player’s excellence on Friday. Against a dominant Toulouse outfit, Simpson almost single-handedly won his side the game by scoring two outstanding individual tries. It wasn’t to be for the Cherry and Whites but they had their scrum-half to thank for the result being as close as it was.

8 CJ Stander (Munster): There were a plethora of options to choose from here, from Sale’s Daniel du Preez to Clermont’s Fritz Lee and the English duo Sam Simmonds (Exeter) and Zach Mercer (Bath), but Stander was superb in Munster’s win over the Ospreys. Although his reaction to the Irish province’s final try was a bit needless – irrespective of what had gone on before in the game – it didn’t discount what was another fine display for the Limerick-based outfit. His work ethic was incredible as the Ireland back-row carried a remarkable 23 times and made a team-high 17 tackles.

7 Colby Fainga’a (Connacht): Exeter’s Jacques Vermeulen was a clear leader here until Connacht upset the odds to defeat Montpellier. Fainga’a has been exceptional since moving from the Rebels and he arguably produced his finest performance for the province on Sunday. The 28-year-old is there primarily for his breakdown work but he also proved to be an effective carrier by running for 63 metres from 12 carries.

6 Peceli Yato (Clermont Auvergne): Is there a better player in the game at the moment? Although the World Cup gave a glimpse of his ability on the biggest stage, a head injury sustained against Australia combined with Fiji’s group stage exit rather deprived us of seeing him in full flight, but there is no doubt that Yato is a freakishly good player. The power is evident but the 26-year-old also has the speed of a wing and the skills which allow him to be dominant in both the loose and the tight. It is mightily tough on Toulouse’s Rynhardt Elstadt and Racing’s Baptiste Chouzenoux, who dismantled the Gloucester and Saracens lineouts respectively, while Paul Boyle showed up well for Connacht, but, as he displayed against Quins, Yato is streets ahead of any blindside, scoring twice and running for a staggering 132 metres.

Could they go all the way this year ?? 🏆

5 Joe Tekori (Toulouse): Is one of the first names on the teamsheet for Les Rouge et Noir due to his power and intelligence in the second-row position. Tekori’s large frame is obviously useful in the tighter exchanges in the scrum and close to the ruck, but his understanding of when to off-load is also impressive. With Toulouse looking to play an expansive game, the lock’s decision-making often keeps their momentum going. Elsewhere, Northampton Saints’ Courtney Lawes was excellent after playing his first game since the Rugby World Cup final.

4 Iain Henderson (Ulster): A nuisance to play against, Henderson is always in the game due to his incredible work in both the loose and the tight, with his carrying ability and defensive excellence in evidence against Bath. The Ireland international is also a very good lineout option and, as a result, the second-row was central to their win at the Rec. Following the retirement of Rory Best, Henderson was handed the captaincy ahead of this season and the early signs are good, with the lock leading by example on Saturday.

3 Rabah Slimani (Clermont Auvergne): In a weekend where there were so many good performances in most positions, tighthead was strangely sparse. However, Clermont’s Slimani played well and had Quins’ scrum in all sorts of trouble early on, which saw his side rewarded with a succession of penalties. As a result, Les Jaunards dominated territory and possession and that enabled them to build up an advantage they would never relinquish.

2 Camille Chat (Racing 92): A brutal performance from the France international, who has improved significantly over the past year. Although his ability with ball in hand has always been there, the core parts of his game – namely the lineout and scrum – still needed to develop if he wanted to be considered amongst the best in the world. Well, he appears to be on the right track. Following the World Cup, which saw him impress for Les Bleus, Chat was accurate at the set-piece against Saracens and dominant in the loose with him running for 36 metres from 18 carries.

1 Denis Buckley (Connacht): It was always going to be tough for the Irish province against Montpellier, but they handled their opponents’ power superbly. In particular, Buckley deserves an extra award after his efforts in Galway. The loosehead incredibly went the full 80 minutes, got through a mountain of work, which included a game-high 18 tackles, and was solid in the set-piece. Munster’s Jeremy Loughman was next best after his performance against the Ospreys, which saw the prop set up Andrew Conway’s try with a wonderful pass out wide.

Could they be challengers for the #HeinekenChampionsCup throne this year?? pic.twitter.com/2ZZ18wUHVr