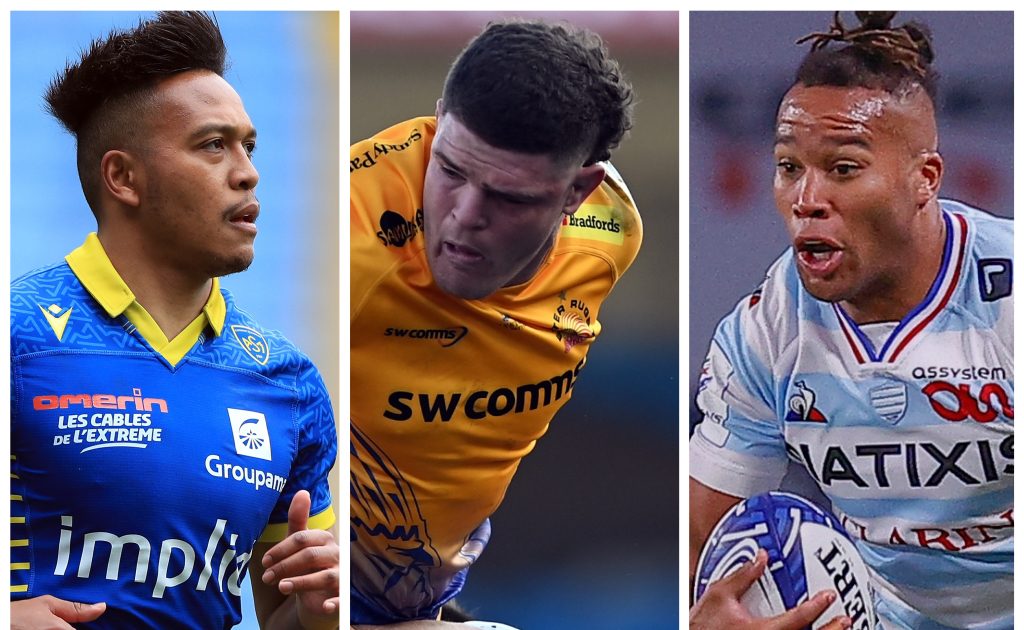 Now that the dust has settled on the Champions Cup’s round-of-16, we’ve gone through the action to pick the best players from the weekend’s games.

Despite a heavy French presence, defending champions Exeter Chiefs lead the way with four representatives in our team with Racing 92 next highest with three players.

Team of the Week: Champions Cup, Round of 16

15 Kotaro Matsushima (Clermont): The Japanese flyer rocked on Saturday as his last gasp try kicked Wasps out of Europe. He sees off strong claims from Exeter’s classy Stuart Hogg, whilst Romain Buros had a solid day for Bordeaux-Begles in their win versus Bristol Bears.

14 Ollie Woodburn (Exeter Chiefs): Woodburn may not be one of the host of international stars amidst the Exeter ranks but with seven carries for 171 metres gained and a try right at the end, he shone brightly in Exeter’s disposal of Lyon. Paolo Odogwu reminded us what England had missed in the Six Nations with a glittering display, whilst Arthur Retiere also impressed for La Rochelle.

13 Virimi Vakatawa (Racing 92): The big French centre may have had a quiet year at international level, but he was a feature of Racing’s thrashing of Edinburgh in Paris, with offloads and power runs galore. George Moala excelled for Clermont with the peerless Semi Radardra powerful in defeat for Bristol.

12 Levani Botia (La Rochelle): The ‘Demolition Man’ is one of the best modern hybrid rugby players in the world, able to play either as a three-quarter or a back-rower, but centre was his gig this week and his try was crucial in overcoming a strong showing from Gloucester, for whom Mark Atkinson also shone. In Llanelli, Rohan Janse van Rensburg put in a big shift for Sale in their impressive win at Parc y Scarlets.

11 Teddy Thomas (Racing 92): His brace for Racing 92 was a feature in their superb disposal of Edinburgh, where he answered his critics by looking to get into the game in midfield and on the opposite wing a lot more than in recent times. He takes the nod over Chiefs’ Tom O’Flaherty and Munster’s evergreen Keith Earls, who also grabbed a brace in Munster’s gallant defeat in Toulouse.

10 Matthieu Jalibert (Bordeaux-Begles): With AJ MacGinty shining for Sale, by racking up 32 points, and Jalibert’s French colleague Romain Ntamack starring for Toulouse, it was a vintage week for fly-halves and any of those three men would have been worthy choices. However, UBB were unfancied despite their home advantage against Bristol Bears and Jalibert produced a masterclass of pinpoint kicking and threatening line breaks, scoring the crucial try to see his side home.

His first score is up for #HeinekenChampionsCup Try of the Round, but the hard – and beautiful – work was done by @matthislebel 🤩

9 Antoine Dupont (Toulouse): The peerless Dupont makes our team of the week yet again with a brilliant two-try display to catalyse a win for Toulouse against Munster. His rival for the title of best scrum-half in the world, Faf du Klerk was equally compelling for Sale, whilst the veteran Maxime Machenaud also delivered the goods for Racing 92 in Paris.

8 Jordan Joseph (Racing 92): France are hardly short of back-row forwards at this moment in time, and the young former France U20 star put in a massive performance of gain line carry and support to take Racing 92 home at La Defense. Elsewhere, Sam Simmonds‘ footwork and electric pace saw him score yet another try for Chiefs, with Sale’s Dan du Preez also impressing in Llanelli.

7 Kevin Gourdon (La Rochelle): The master craftsman of the French back-row reminded the national selectors he still has a lot to offer in international rugby as his power and intellect shone in La Rochelle’s impressive display at Kingsholm. Sale’s Tom Curry was his usual huge physical self, whilst Exeter’s Jacques Vermeulen also stood out at Sandy Park.

6 Dave Ewers (Exeter Chiefs): A big performance from a big man, Ewers crossed to score a crucial try to draw away from Lyon at the 50-minute mark and carried hard all day for some 56 powerful metres. His opposite number Dylan Cretin was a perennial pain in Exeter’s backside, stealing lineouts and supporting well to score in the final moments. Elsewhere, Munster’s Gavin Coombes put in another fine display in defeat, crossing the whitewash twice for a brace of tries.

5 Jonny Hill (Exeter Chiefs): Hill appears to have learned a lot in his months with England this season and put in a huge performance, scoring twice in the first 25 minutes for Exeter. Donnacha Ryan is 38 years old next birthday yet looks like a spring lamb in the colours of Racing, whilst Seb Vahaamahina looked back to his abrasive best for Clermont.

"We knew they were going to start fast and we previewed that and we got it wrong to be honest."

"We'll be ready for Leinster next weekend."

Star of the match Jonny Hill reflects as @ExeterChiefs become the first English team into the quarter-finals.#HeinekenChampionsCup pic.twitter.com/v5yJhSN6FO

4 Josh Beaumont (Sale Sharks): The lesser-known Beaumont was in commanding form in both lineout and carry, crossing the whitewash with a well-executed open field support try for Sale against the Scarlets, and he sees off the claims of Racing’s Bernard le Roux, whilst Jonny Gray also had an excellent outing for Exeter Chiefs.

3 Tomas Francis (Exeter Chiefs): Big Tomas had a memorable afternoon coming on as a half-time replacement for Chiefs. Long gone are the criticisms of his weight and fitness and he enjoyed a powerful display in the loose, claiming the tighthead berth from the excellent Toulouse prop, Charlie Faumuina and, despite his side’s defeat, a determined second half display from Bristol’s favourite Kiwi, John Afoa.

2 Akker van der Merwe (Sale Sharks): Rather like fly-half this weekend, this was a vintage round for the hookers. In fairness, any of Camille Chat (Racing 92) or Julien Marchand (Toulouse) would have been worthy contenders for the crown, but Van der Merwe was massive for Sale, crossing twice and hitting his jumpers all afternoon. To crown it all he also gave us one of the most amusing monosyllabic post-match interviews in recent times as he was clearly overwhelmed with his award of ‘Star of the Match.’

1 Peni Ravai (Clermont): The flying Fijian has been impressive this season after joining Clermont from UBB last season and was instrumental in his team’s win in Coventry. Cyril Baille impressed once again for Toulouse and the veteran Eddy Ben Arous was at his tackling and jackling best for Racing, but Ravai’s score proved crucial for his team and he takes the loosehead berth.