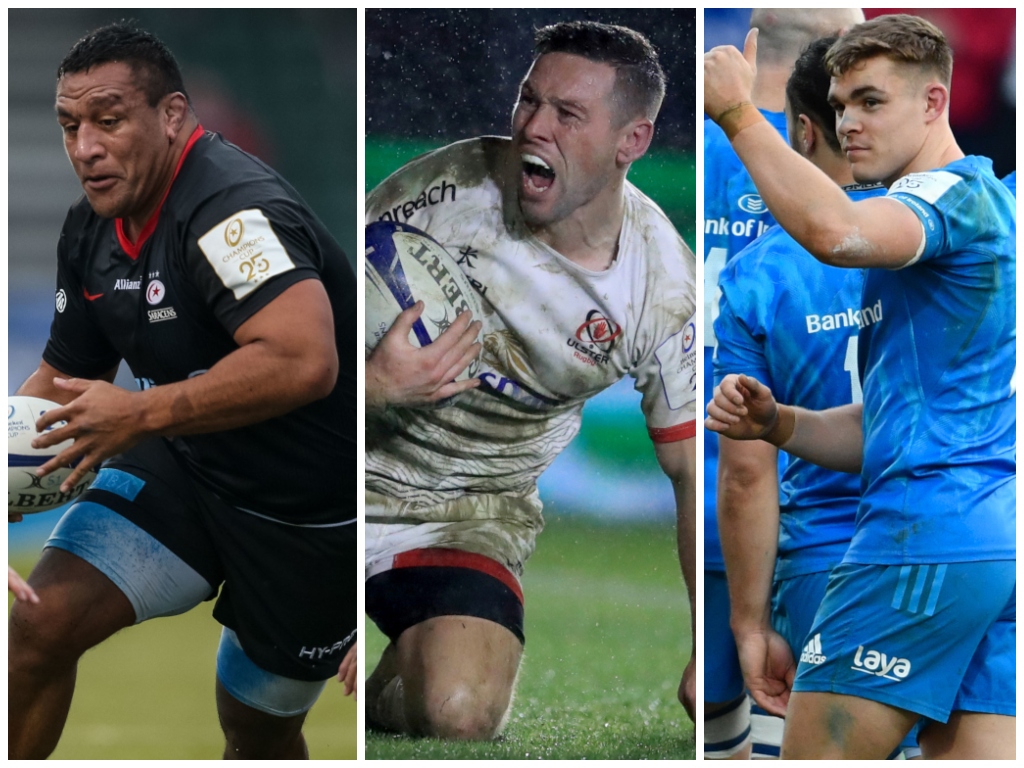 Now that the dust has settled on Round Four of the Champions Cup, we’ve gone through the action to pick the best players from the games that took place.

Following another fine display against Northampton Saints, Leinster once again have the most representatives with four, while Clermont Auvergne and Ulster are the next best with two apiece. Be sure to comment and also leave your own line-up in the comments section below.

Team of the Week: Champions Cup: Round Four

15 Jordan Larmour (Leinster): Just gets better and better and will surely be Ireland’s full-back for the 2020 Six Nations. Everyone knows about his attacking quality and that was once again in evidence against Northampton in Dublin, but his core skills have also improved significantly. Rob Kearney has previously had the edge due to his positional play and work in the air, but Larmour has been very solid in those areas over the past few weeks. Meanwhile, Isaia Toeava was superb for Clermont on Sunday but it was not enough to displace to the Irishman.

14 Damian Penaud (Clermont Auvergne): Despite being named at centre, the France international was shifted over to the wing following an unfortunate injury to Samuel Ezeala in the first minute and duly impressed. Once again, the elusive Penaud was in outstanding form against Bath, scoring one try, setting up two more and making over 100 metres in total. Elsewhere, Dave Kearney was excellent for Leinster while the Ospreys’ Lesley Klim touched down twice against Racing 92.

13 Garry Ringrose (Leinster): Missed out in Round One despite scoring a hat-trick against Benetton but doesn’t this time following another superb display. The Ireland international is such an intelligent player and was in the right place at the right time to touch down on three occasions. Northampton struggled to get to grips with Ringrose’s and Leinster’s dexterity and, as a result, he takes the place from Exeter Chiefs’ Henry Slade.

12 Mark Atkinson (Gloucester): This was tough to call following some impressive performances from Bundee Aki (Connacht), Levani Botia (La Rochelle) and George Moala (Clermont) but we’ve gone for Aki’s opposite number from Saturday. We felt he just edged the individual duel after scoring two tries and consistently making it over the gain line. Atkinson also has superb hands and that attacking prowess played a significant part in the Cherry and Whites’ good display for 37 minutes in the second period. Unfortunately for them, they switched off in the latter exchanges and succumbed 27-24.

11 James Lowe (Leinster): The former Chiefs player enjoyed the open spaces afforded to him on Saturday as the 27-year-old ran for 110 metres and made five clean breaks. Lowe crossed the whitewash once and set up Ringrose’s second try with a wonderful off-load as Leinster secured a dominant victory over the Saints – something the betting site comparison pages were predicting fairly regularly. Clermont’s Alivereti Raka and Racing’s Juan Imhoff were also in fine form, but the New Zealand-born wing takes it.

It's two in six minutes for the hosts at the Aviva!

10 Camille Lopez (Clermont Auvergne): There were some eye-catching displays from Leinster’s Ross Byrne and Toulouse’s Romain Ntamack, but the Clermont man had another excellent game as they hammered Bath. The fly-half got his backline moving impressively while his cross-field kicks caused a number of problems for the visitors. Lopez isn’t necessarily much of a running threat but he finished his try nicely.

9 John Cooney (Ulster): The scrum-half probably produced the performance of the round after his efforts against Harlequins on Friday. Cooney scored two well-taken tries but it was his overall control which was particularly excellent. In the first half when it was dry, the scrum-half’s passing was sharp but, even after the rain came down, the Ulsterman adapted superbly. Quins failed to deal with Cooney’s accurate kicking and it kept the Belfast-based outfit on the front foot. Elsewhere, it was also a good weekend for Racing’s Maxime Machenaud and Exeter’s Nic White.

8 Sam Simmonds (Exeter Chiefs): There were plenty of names pressing for this number eight jersey as Caelen Doris, Billy Vunipola, Yoan Tonga and Braam Steyn were outstanding for Leinster, Saracens, Racing 92 and Benetton respectively. Doris and Vunipola in particular showed flashes of brilliance but for Simmonds’ effectiveness with ball in hand which saw him cross twice against Sale Sharks, we go for the Exeter back-row.

7 Jack O’Donoghue (Munster): Despite going down to a narrow loss to Saracens, we felt that O’Donoghue deserved a place this week. Alexandre Lapandry and Kevin Gourdon earn mentions after their efforts for Clermont and La Rochelle respectively, but O’Donoghue and Munster gave a decent account of themselves at Allianz Park, with the 25-year-old showing what a physical presence he is.

6 Paul Boudehent (La Rochelle): The French flanker was powerful in the carry and solid at the breakdown as La Rochelle picked up what could be a priceless away victory at Glasgow Warriors. He finished with a joint team high of 11 carries to see off Nick Isiekwe, who stood up well for Saracens.

5 Iain Henderson (Ulster): When he’s as aggressive with ball in hand as this there are few better second-rows in the game. The Ulster lock was everywhere in their fourth successive European win as they got the better of Quins at the Stoop. Boris Palu gave a solid account of himself for Racing in their win over the Ospreys but Henderson won this battle hands down as he led from the front on Friday.

4 Rory Arnold (Toulouse): Ultan Dillane enjoyed a busy outing for Connacht in their triumph but with two tries we had to go with the Toulouse lock. Arnold only arrived at the club after his Rugby World Cup exploits for the Wallabies but he’s quickly settled in to life at Toulouse. 11 carries for 49 metres that included beating three tacklers made for an impressive outing from the giant forward.

3 Tadhg Furlong (Leinster): After a disappointing past few months by his own high standards, Furlong was back to his best on Saturday as he shone against Northampton Saints. Eight carries for 42 metres, a solid set-piece and seven tackles sees him get in ahead of in-form Exeter Chiefs tighthead prop Harry Williams, who sent another message to England head coach Eddie Jones of his credentials.

2 Dave Heffernan (Connacht): Luke Cowan-Dickie and John Ulugia put in workmanlike shifts for Exeter Chiefs and Clermont respectively as they showed plenty in the tight exchanges once again. However, Connacht’s Heffernan grew into their come-from-behind victory against Gloucester. He made an impressive 19 carries in the win as Connacht kept alive their qualification hopes in dramatic style.

1 Mako Vunipola (Saracens): While his brother just missed out on our team, Mako got the nod ahead of Cherif Traore of Benetton after helping Saracens to a much-needed win over Munster. It was a typical Vunipola showing as he made an incredible 20 carries in a try-scoring performance that yet again showed just what a unique loosehead he is. Throw in 15 tackles and it was a busy day at the office.