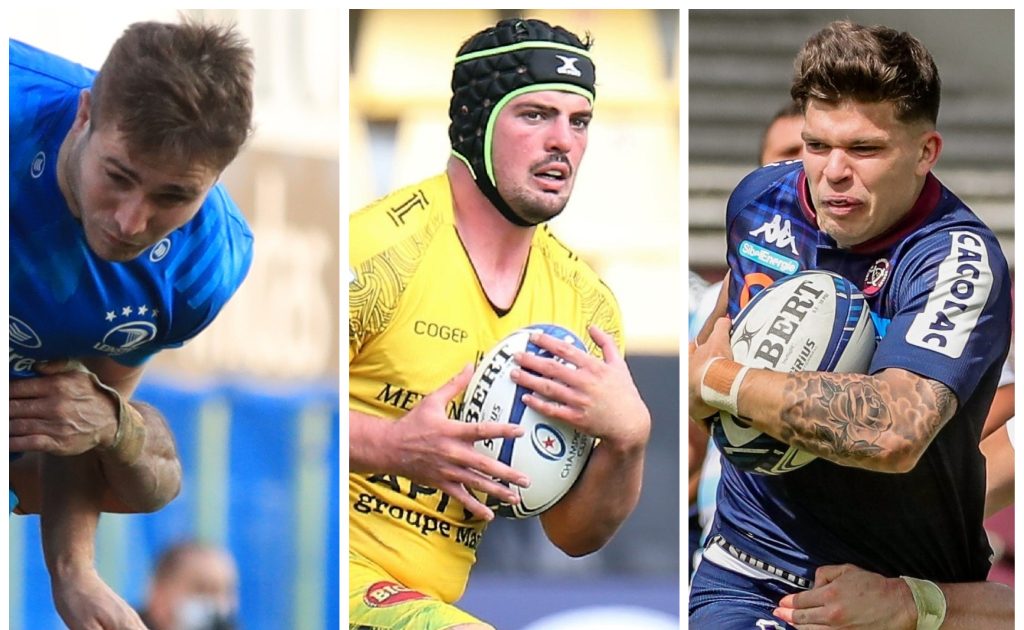 Now that the dust has settled on the Champions Cup’s quarter-finals, we have gone through the action to pick the best players from the weekend’s games.

After their impressive win over Sale Sharks, La Rochelle lead the way with seven players in our team while Leinster are next highest with five representatives.

15 Brice Dulin (La Rochelle): Dulin is an absolute genius of a rugby player and his 121 metres gained for La Rochelle created so much for his side as they thumped Sale 45-21. Lions hopeful Hugo Keenan furthered his British & Irish Lions tour claims with an assured display for Leinster, whilst in defeat, Kotaro Matsushima was at the centre of everything that Clermont did well.

14 Jordan Larmour (Leinster): The Irishman appears to be over his injury issues and finished in style at a crucial moment in a vital passage of play in the second half against Exeter at Sandy Park, to double up on his earlier score. Elsewhere, Toulouse’s Cheslin Kolbe put in an assured display without ever finding space or the freedom to score, whilst Byron McGuigan took his opportunities well despite a tough day at the office for Sale Sharks.

13 Geoffrey Doumayrou (La Rochelle): He may be the forgotten man of French international selection but the beefy centre was on the end of everything La Rochelle did well, crossing for an impressive brace on Saturday. Rory O’Loughlin was solid all day for Leinster, whilst Henry Slade also had some memorable moments running freely for Exeter despite their defeat.

12 Robbie Henshaw (Leinster): The softly spoken Irishman was once again a massive rock for his team. He’s the sort of midfielder you build sides around and he’s sure to be one of the structural foundations of the British and Irish Lions later this year. Elsewhere, Pita Ahki shone for Toulouse in a day more for piano shifters than piano players, whilst La Rochelle’s Levani Botia once again impressed.

11 Raymond Rhule (La Rochelle): The former Springbok was in electric form on the Atlantic Coast as he finished off one move then created and ran in another, racking up 88 metres for his brace. Tom O’Flaherty shook Leinster early doors in Exeter, as he ripped open their midfield twice in 10 minutes, and Leinster’s James Lowe was again incredibly busy out on the flanks in attack, crossing for a well taken early score.

10 Matthieu Jalibert (Bordeaux-Begles): The little magician makes our team for the second consecutive week after he dragged his rather cumbersome side home in the dying moments, landing a 54-metre penalty to snare 24 points on the day and was a class apart from anything else seen on the Bordeaux coast. His French rival Romain Ntamack matched him blow for blow as he took Toulouse home at Clermont, whilst Ross Byrne was excellent for Leinster after replacing Johnny Sexton early on in the match against Exeter.

9 Maxime Lucu (Bordeaux-Begles): He might be more of an artisan scrum-half than the usual French half-back artist, but he made some compelling breaks and powerful runs, especially in the last quarter to see his team home. Antoine Dupont and Morgan Parra cancelled each other out as both had fine games for Toulouse and Clermont, with Dupont probably shading the tussle and Parra missing a crucial three-pointer at the end.

8 Victor Vito (La Rochelle): The La Rochelle back-row are something very, very special indeed and the former All Black showed glimpses of his 2015 Rugby World Cup form, culminating in a wonderful offload to send his colleague Gregory Alldritt over early in the match. Jack Conan was a snarling, carrying presence all afternoon for Leinster whilst Scott Higginbotham’s experience and cool head was an essential factor in Bordeaux’s tense victory against Racing 92.

7 Josh van der Flier (Leinster): Andy Farrell thinks Van der Flier is a little lightweight at Test level, but his nine carries, many of them in congested midfield breaks, were a key component of Leinster’s fightback and he stood up physically when it mattered. Kevin Gourdon was his usual creative and intelligent self for La Rochelle, whilst his fellow French discard, Francois Cros was very effective in the close quarter battles for Toulouse.

6 Gregory Alldritt (La Rochelle): You can play this guy in any position across the back-row and he’ll give you a world class response. He was at his banging and bustling best against Sale and sees off the wonderfully abrasive Leinsterman, Rhys Ruddock, and his direct opponent, Dave Ewers, who was one of the better Exeter performers on show on Saturday.

5 Devn Toner (Leinster): Not often does Exeter’s lineout struggle for momentum, but Toner and his near seven-foot presence makes it so hard for the opponent to clear him. Add in some galloping charges and a powerful display in the scrummage and he sees off Chiefs’ Jonny Hill, who showed his improvement once again despite a loss, and the excellent Rory Arnold of Toulouse.

4 Will Skelton (La Rochelle): We reckon we’ve picked the biggest second-row partnership in rugby history as the 23 stone of Skelton hammered Sale’s gainline all day, with the big Samoan-Aussie outstanding in gaining momentum. Clermont’s Peceli Yato was superb in defeat, whilst Donnancha Ryan was at the centre of all of Racing 92’s adhesion in defeat.

3 Uini Atonio (La Rochelle): Word is that the massive Atonio has shed four or five kgs of fat over lockdown, but that’s just a drop in the ocean when you’re 152 kilograms and he made use of all of his bulk to destroy the much-vaunted Sale scrummage. Leinster’s Tadhg Furlong may want to forget a couple of missed tackles but elsewhere, he was excellent, as was Kiwi World Cup winner Charlie Faumuina for Toulouse.

2 Julien Marchand (Toulouse): Many criticised the national selectors when Marchand leapfrogged other candidates to become the first-choice French hooker, but this guy is the complete footballer, with a peerless set-piece and some serious gas in the loose. Pierre Bourgarit was in the middle of a massive La Rochelle scrummaging effort, whilst Ronan Kelleher secured a couple of crucial turnovers for Leinster.

1 Cian Healy (Leinster): Healy’s vast experience came to the fore at Sandy Park where his scrummaging and loose play were crucial components of his side’s impressive win. Jefferson Poirot went well for Bordeaux and was his usual jacking and tacking self, whilst Cyril Baille made some telling runs and powerful drives in his usually impressive display for Toulouse.