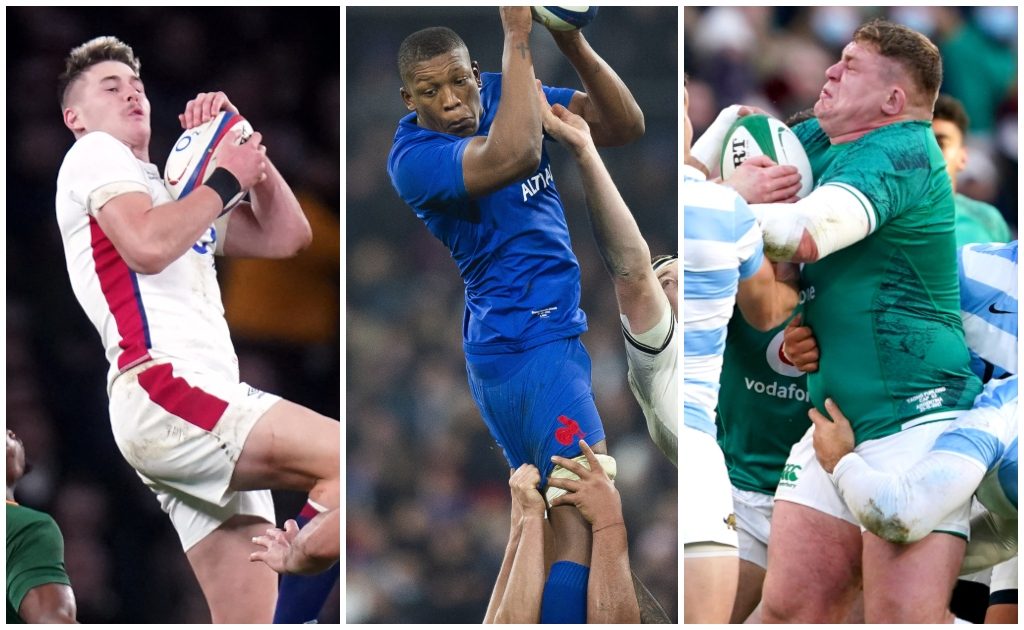 With the dust having settled on the final round of the Autumn Nations Series, we have gone through the action to select the best players from the weekend.

15 Freddie Steward (England): Impressive last week, the big Tiger went up another level to score the second try of the game against South Africa, commanding the high ball all evening in a fine day for England’s youngsters. France’s Melvyn Jaminet was outstanding in Les Bleus’ victory over New Zealand whilst Hugo Keenan was part of a memorable Sunday afternoon for Ireland.

14 Damian Penaud (France): Penuad’s try for France saw them clinch a memorable win in Paris against the world’s most talented side, New Zealand. Darcy Graham scored for Scotland as he ran 11 times for 54 metres and while Joe Marchant played much of England’s game in the centre, he was pivotal in creating England’s second half scores at Twickenham.

13 Rieko Ioane (New Zealand): Ioane was the spark that ignited the All Black comeback in Paris and his brace sees him take the shirt. They say play to the referee’s whistle and Nick Tompkins proved that to be the case as his remarkable try and personal awareness ensured a Welsh win against a 14-man Wallaby side. Once again, France’s defensive leader, the outstanding Gael Fickou, showed his worth in Paris.

12 Henry Slade (England): Slade started at 13 but played 77 minutes at 12, providing some sumptuous touches against the hugely impressive Damian de Allende. In Paris, Jonathan Danty showed the reason he’s starting in the centre as he gave France the go-forward they needed.

11 Makazole Mapimpi (South Africa): People who describe South Africa as a strictly ‘Plan A’ side forget the pace they possess on the wings and Mapimpi was the only try scorer to breach England’s line this November. James Lowe (Ireland) again showed his huge improvement whilst Duhan van der Merwe was back to his bullocking best in Edinburgh.

The moment the momentum shifted?@FranceRugby at their very best

10 Romain Ntamack (France): It really was impossible to separate the outstanding running display of the Toulouse man against the brilliance of England’s Marcus Smith at Twickenham. Ireland’s Joey Carbery also showed his advancement in a strong showing in Dublin.

9 Antoine Dupont (France): No player gets in more Teams of the Week than Dupont. The Frenchman is arguably the most complete player in the world right now and he sees off a great showing again from New Zealand’s Aaron Smith and an inspiring first try performance from Raffi Quirke for England.

8 Tom Curry (England): Curry silenced those that don’t believe he can play at eight with an all-action display that was central to England’s win, featuring 11 carries and 16 tackles. Caelan Doris showed his return from injury is complete as he was in try-scoring mood in Dublin, whilst Aaron Wainwright was one of Wales’ more impressive players in their fortuitous win in Cardiff.

7 Anthony Jelonch (France): The Castres flanker put in a mammoth shift in Paris, notching up 22 tackles in one of the best personal displays of November. In any other week, Josh van der Flier‘s brace may have seen him nominated, whilst the amazing Siya Kolisi was absolutely brilliant all night versus England.

6 Courtney Lawes (England): In his last six Test matches, Lawes has delivered a world-class performance in each. With the captaincy his, the Northampton flanker is one of the best players in the world right now. A shout out for Francois Cros, who was very industrious for France, whilst the evergreen Peter O’Mahony treated us to some well chosen words as Ireland smashed Argentina.

5 Jonny Hill (England): Hill built upon his storming performance against Australia to go one better this past weekend. He finally looks the Test enforcer that England have needed since George Kruis retired. Paul Willemse was his uncompromising self in Paris, against one of the world’s best in Brodie Retallick.

4 Cameron Woki (France): Playing out of position, Woki’s lineout work was magnificent all evening in Paris, whilst he found time to make 16 tackles in an all-action display. Old rivals Eben Etzebeth and Maro Itoje went toe to toe for 80 mins at Twickenham for the fourth time this year and nobody still knows which one is the best.

3 Tadhg Furlong (Ireland): A great day at the office for the Wexford walloper, he carried, tackled, pushed and scored in a typically all-action display. Vincent Koch put in a massive second-half performance despite the Springboks’ loss at Twickenham and again in France, we saw Demba Bamba cause all sorts of impact mayhem as he defined the term finisher.

2 Peato Mauvaka (France): Two more tries for the rookie hooker who underlines France’s insane strength in depth in the number two shirt. Ireland’s Ronan Kelleher impressed yet again with a busy display against Argentina, with Malcolm Marx and his cohorts almost changing the game for South Africa.

1 Andrew Porter (Ireland): Porter’s ability to play on either side is gold dust in the modern era and he decimated Los Pumas in the tight. Steven Kitshoff emphasised that the importance Springbok bench simply cannot be underestimated and France’s Cyril Baille spent the New Zealand match carrying and tackling and is our last nominee.