Home Uncategorized Suspicion over why Timisoara-Stade was cancelled 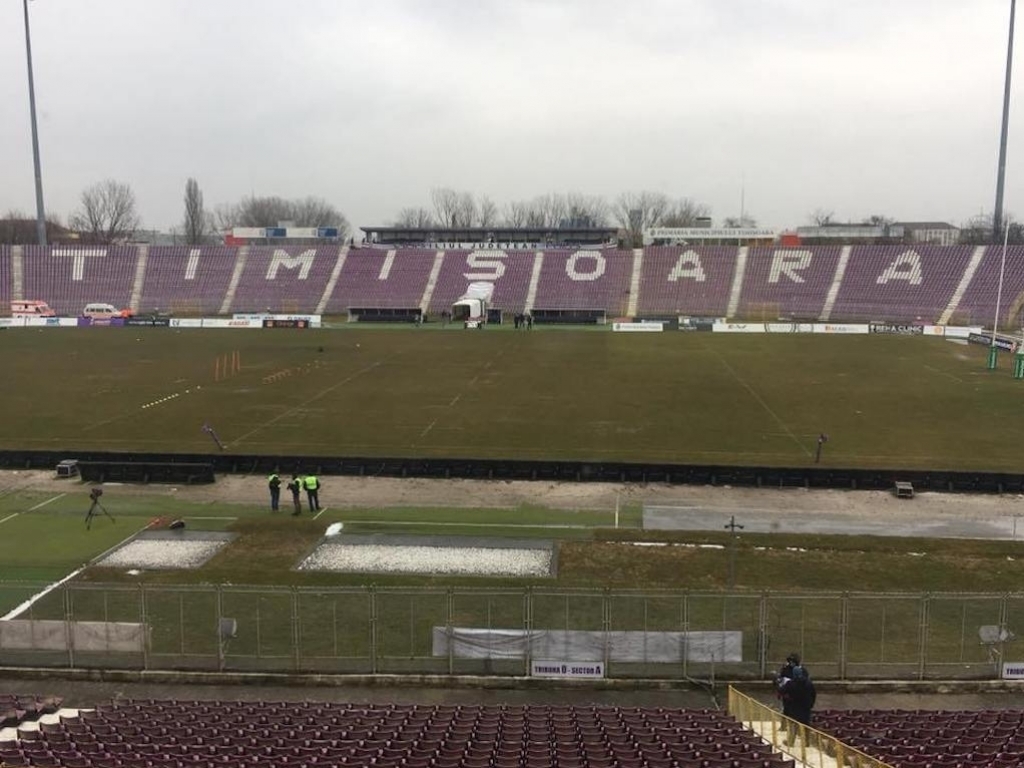 The Challenge Cup match between Romanian club Timisoara Saracens and Stade Français was cancelled by the EPCR last weekend because of the state of the pitch.

The match was initially postponed, and later EPCR officially announced it would not be played at all, mentioning “a forecast of increasingly poor weather conditions” as the reason. On their website, Stade Français claim the pitch was completely impractical.

But was it really that poor, or is this just another example of a powerful club using its influence in order to abuse one from a Tier 2 rugby nation?

The weather in Timisoara was very bad over the previous weeks but the local club made massive efforts for the match to be played.

They spent around €10,000 to bring a powerful generator from Bucharest, needed to start the undersoil heating system of the Dan Paltinisanu arena. Photos taken at the stadium show that the grass was in a decent shape; all of the snow was cleared, and there was no sign of frost. Of course it was wet and cold, but that shouldn’t be a problem for rugby. Matches are played in worse conditions in Europe every weekend.

In fact, the official inspection earlier that morning concluded that the game would take place. It was only a few minutes before the kick-off when Stade officials abruptly announced they would not play, quoting safety concerns.

Eventually, the Scottish referees conceded to their pressure and reversed their earlier decision, ignoring all arguments from the Romanian side. The fans in the stadium were told to go home, while TV station DigiSport had to cancel their live broadcast.

“We’ve managed to bring the pitch to a decent standard. We had a technical meeting at 10:30, with the referees and Stade Français representatives, and it was decided that the match will be played if the pitch doesn’t become worse until 13:00. The pitch wasn’t worse, it was in the same state,” Timisoara vice-president Dusan Filipas told local website tmsport.ro.

“The captain of Stade Français refused to play. The referees only listened to his opinion and decided the pitch was unplayable.

“It was only his opinion that mattered. We wanted to play.”

The EPCR officials only postponed the match for one hour initially, with a final decision to be taken in a later meeting, which only ended around 18:00.

Strangely, Stade Français immediately posted on their website and social media that it was called off for good, using a photo of snowy frozen grass that couldn’t have been captured from the Timisoara stadium. It was almost like this was their goal all along.

The entire behaviour of the French club leading up to this match felt suspicious. Back in October, Timisoara Saracens notified EPCR and all of their opponents in their group that the winter is very harsh in Romania in January, with forecasted temperatures as low as -20 degrees celsius.

They asked for all of their home matches to be rescheduled to December instead, which is common practice for Eastern European clubs and has been done every time for the Bucharest Wolves and Russian club Enisei-STM. Both Edinburgh and the Harlequins agreed but the Parisian club refused, even if they were well-aware of the hazards of Romanian winter from their previous trips to Bucharest.

According to insiders close to the Romanian club, Stade representatives didn’t reply to any emails regarding practical organisational aspects in the weeks leading up to the match. Even though Timisoara has an international airport offering direct daily flights to Paris, they oddly chose to land in Budapest in neighbouring Hungary. A bus trip of more than 300 km doesn’t sound like a good idea before a competitive fixture.

Arriving late on Friday, the Stade were unable to carry out their captain’s run. They have also declined well in advance the Romanian club’s invitation for the traditional third half after the game.

Even before captain Pascal Papé refused to play, only five of their players bothered to come out for the warm-up. Their commitment and interest in playing the game was minimal and no alternative was considered, such as rescheduling it for the next day in Timisoara or the covered Cluj Arena, a further 300 km away.

It must be said that the result of the match was by no means certain. Timisoara’s results in the competition so far have been very poor but French clubs don’t travel well, and Stade Français have closely escaped upset defeats against Bucharest Wolves in previous seasons of the Challenge Cup. The wet pitch would have balanced the odds, increasing the chances of the Romanian pack, especially since the Top 14 side sent their reserves to Timisoara, with many young forwards. They might have won the match, but it wasn’t a given and an attacking bonus point was unlikely.

By essentially forcing a forfeit of the match, they will probably be awarded a 28-0 win and 5 points, which greatly increases their qualification chances. With 16 points, a win in the last match of Pool 5 at home against Harlequins would pretty much guarantee a quarter-final spot for Stade Français, even if they fail to top the group.

We must also note that European fixtures have been played in the past in much worse conditions. In 2015, Connacht took on Enisei-STM in Siberia at -20 degrees celsius on a rock-hard frozen and snowy pitch.

One year earlier, Newport Gwent Dragons accepted to move their match against the Bucharest Wolves to a secondary ground because the awful weather turned the designated one into a swamp. Even last weekend, bad weather only postponed the clash between Treviso and Gloucester for a few hours until the match was moved to Treviso’s training ground.

Refusing to play on a pitch that poor but playable is more than just gamesmanship, it is against all of the core values of our sport.

A visit from Stade Français was a celebration for all of the local players and fans and Romanian rugby in general, as well as Timisoara’s last realistic chance to finish their first European campaign with a creditable result.

Hopefully, EPCR will not yield to French pressure and will reschedule the fixture, to discourage similar dishonourable tactics in the future.

UPDATE – After this article was written, EPCR released the following statement on Wednesday. Ed.

EPCR has lodged a misconduct complaint against Timisoara Saracens following the cancellation of the Romanian club's European Rugby Challenge Cup, Round 5 match against Stade Français Paris on Saturday, 14 January 2017.

The misconduct complaint is that Timisoara Saracens did not take all appropriate steps to prepare and protect the playing surface at the Dan Paltinisanu Stadium in contravention of the Tournament Rules of the 2016/17 Challenge Cup Participation Agreement.

As a consequence, and as there was no suitable alternative venue, the Round 5 match could not be played on the scheduled date and at the appointed kick-off time.