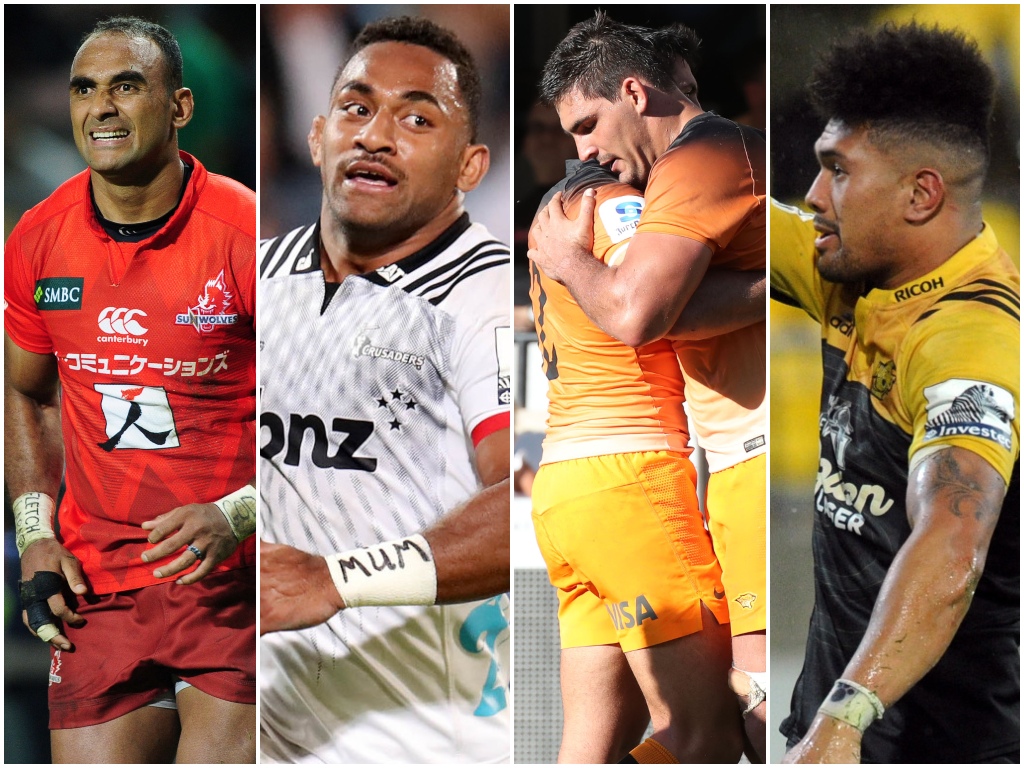 With the dust having settled on Super Rugby 2019, we have gone back over the action to pick out the best players from the past campaign.

There’s a healthy mix to our selection, with some players having made the cut despite hailing from struggling teams.

So without further ado here’s our line-up. Make sure to comment below on who you think should have been named.

Super Rugby: Team of the Season

15 Melani Nanai (Blues): Possibly a surprising call to begin but we just felt Nanai had his best season to date for the Blues. The soon-to-be Worcester Warriors back made the most metres in the competition, standing out game after game with his devastating sidestep, pace and ability to beat a man making him a big threat to opposition. He sees off Emiliano Boffelli (Jaguares), David Havili (Crusaders) and Tom Banks (Brumbies), who were all superb in possession, with the latter pushing his name forward for the Wallabies starting jersey heading into the Rugby World Cup.

14 Sevu Reece (Crusaders): Super Rugby 2019’s top try-scorer was nailed on as our 14 as he enjoyed a breakthrough first season with the champions. So difficult to bring to ground, the now All Black call-up offered plenty on the right wing for Scott Robertson’s team, scoring 15 tries while making a whopping 39 carries which was the most in the league. He was one part of an excellent Crusaders back three.

13 Anton Lienert-Brown (Chiefs): Matias Orlando can feel unfortunate to miss out here as he grew as the campaign wore on. But in a struggling team, especially early in the season, Lienert-Brown led by example at the Chiefs with consistently high-class performances. The All Black was the glue that kept the Chiefs backline together as it was tested by injuries and changes. Such a classy midfield operator.

12 Samu Kerevi (Reds): They might have finished in 14th place in the overall standings but there were some positives for Brad Thorn’s Reds in 2019, the biggest being Kerevi’s form. He can leave the franchise with his head high as this year the Wallaby was on top of his game, finishing with a tournament high of 220 carries, to pip Ngani Laumape of the Hurricanes. The Reds will sorely miss Kerevi in 2020.

11 Semisi Masirewa (Sunwolves): Below the Reds on the table were the Sunwolves but that hasn’t stopped us picking Masirewa in our side. He filled in all over his side’s back three positions and relished being leaned on as their main attacking threat, causing mayhem whenever he touched the ball. Rieko Ioane earns a mention here but we simply had to find a place for Masirewa after a hugely impressive campaign.

🤔 Who would you pick as New Zealand's starting fly-half? #RWC2019

10 Richie Mo’unga (Crusaders): Has Mo’unga done enough to usurp Beauden Barrett as New Zealand’s starting fly-half (cast your vote on our poll)? While Barrett is a class act, it’s getting more and more difficult to ignore that Mo’unga is now the real deal. Whether he can translate this Crusaders form to the international arena is now the ask and we expect this Rugby Championship he might get more of a chance from the off.

9 TJ Perenara (Hurricanes): Three names stood out here as Brad Weber (Chiefs) was excellent and fully deserves his call-up to New Zealand’s training squad. Joe Powell (Brumbies) meanwhile continues to grow as an organiser at the base, but for his rugby intelligence and leadership we went for Perenara. Much like at 10, New Zealand have a call to make at scrum-half. Should it be Perenara or Aaron Smith?

8 Kwagga Smith (Lions): The versatile Springbok back-row is the Johannesburg-based outfit’s first-choice openside flanker but packed down regularly at the base of the scrum due to the absence through injury of the team’s skipper, Warren Whiteley, and impressed throughout the season. The former Blitzbok was a constant threat on attack and was one of his team’s leading ball carriers. Akira Ioane, who was our pick in last year’s team, was good for the Blues again this season and Isi Naisarani of the Rebels also played well.

7 Ardie Savea (Hurricanes): The All Blacks tearaway was one of the world champions’ stars on their end-of-year to Europe last year and he carried that form into Super Rugby as he was one of the Hurricanes’ best players in their run to the semi-finals. The 25-year-old’s breakdown work has always been solid and he continued with the good work in that department while his ball carrying skills also impressed and he comes in ahead of Marcos Kremer, who was one of the Jaguares’ best players.

6 Pablo Matera (Jaguares): The Argentina international was arguably the best player in the tournament after delivering excellent performances consistently throughout a memorable campaign for the Jaguares. Matera played the game at a high intensity which made him a handful to opponents. The 25-year-old’s ability to get over the gain-line on a consistent basis was impressive and he also put his body on the line with several big hits on defence. Beats out All Blacks newbie Luke Jacobson, who was in good form for the Chiefs again.

5 Rory Arnold (Brumbies): First up, a mention for Bulls second-row RG Snyman, who was a stalwart for his team, but Arnold keeps the Springbok out as he was one of the Brumbies’ best players this season. The 6ft 10 giant was his team’s go-to-man in the lineouts and finished the season with the most balls won in the set-piece (81). The Wallaby also played well in the loose and put his body on the line with excellent defensive work throughout.

4 Guido Petti (Jaguares): This was a tough decision as Scott Barrett of the Crusaders also made a big contribution for the champions, but Petti gets the nod for his strong showings which helped the Jaguares reach the final. The 24-year-old was a major source of possession for the men from Buenos Aires with his superb lineout skills and won the second most balls at the set-piece for the season. Also did well in the enforcer role and shone as a ball carrier.

3 Allan Alaalatoa (Brumbies): The Reds’ Taniela Tupou and Trevor Nyakane of the Bulls played well on a consistent basis but Alaalatoa was one of the Brumbies’ heroes in their drive to the semi-finals. The 25-year-old was the cornerstone of his team’s scrum and stood up well in the set-piece against stronger scrummagers. Alaalatoa also made his mark on defence and was amongst his team’s most prolific tacklers in several matches.

2 Folau Fainga’a (Brumbies): The entire Brumbies pack deserves credit for laying a solid platform for their backs and Fainga’a came to the fore with numerous outstanding performances at the coalface. Received plenty of praise for his try-scoring heroics which culminated in him equalling Malcolm Marx‘s record for most tries by a forward (12). Fainga’a seldom played poorly and keeps out Marx and Codie Taylor, who also impressed for the Lions and Crusaders respectively.

1 Lizo Gqoboka (Bulls): One of the most improved players in this year’s competition, and a regular in our Team of the Week, Gqoboka caught the eye with several outstanding showings which played a crucial role in helping the Bulls reach the play-offs for the first time since 2013. A dynamic ball carrier, the 29-year-old was a constant threat on attack but he did not neglect his core duties, especially his scrummaging which was solid throughout.