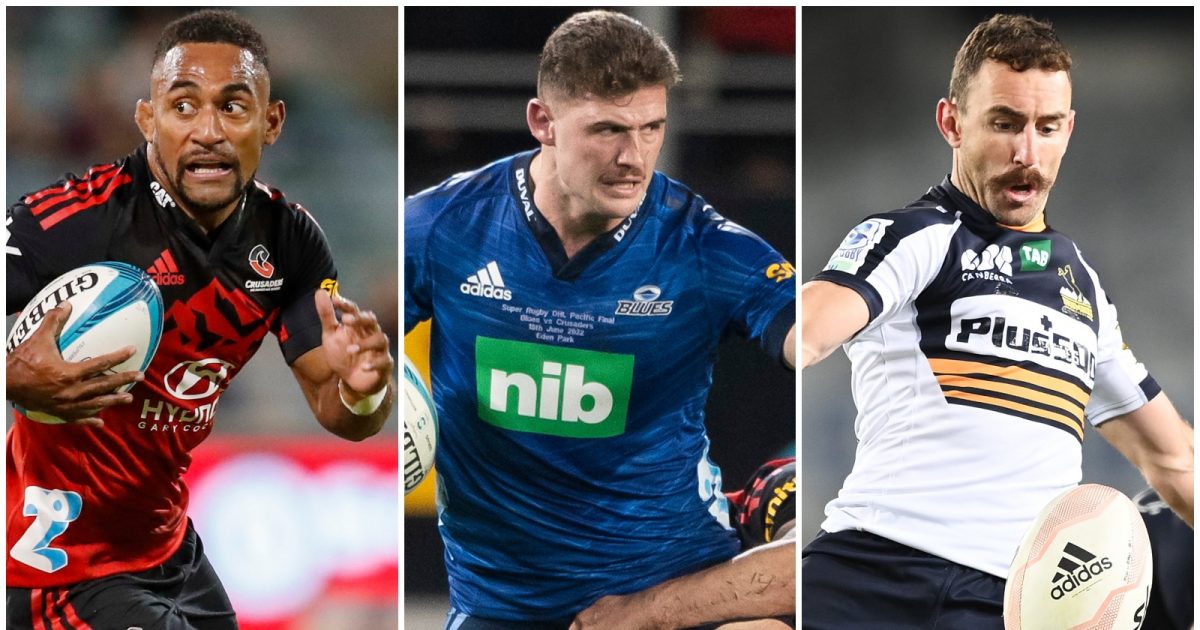 With the dust having settled on Super Rugby Pacific 2022, we have made our calls on which players stood out the most over a memorable tournament.

Unsurprisingly the Crusaders and Blues dominate our line-up, with five representatives apiece from the champions and runners-up making our team.

So without further ado, here’s our selection that we feel is a fair reflection on the year. Make sure to have your say and leave your side in the comments.

15 Stephen Perofeta (Blues): All Blacks and Crusaders superstar Will Jordan was, once again, in the running after several superb attacking performances but we’ve opted for Perofeta, who was at the forefront of the Blues’ outstanding run to the final. Although he also featured at fly-half, the 25-year-old played most of his matches at full-back and performed consistently well. He was safe under the high ball while also proving a genuine threat on attack and his goalkicking was excellent, so it was not surprising that he finished as the tournament’s top points-scorer.

14 Sevu Reece (Crusaders): The All Blacks flyer started the men from Christchurch’s campaign on the replacements bench but soon found himself in the eventual champions’ run-on side and did not look back after that. He proved once again that he is one of the game’s best finishers as he was the tournament’s joint leading try-scorer with 10 five-pointers, alongside team-mates Jordan and Leicester Fainga’anuku. Reece also made the most clean breaks (17) and beats out the Blues’ Mark Telea and Tom Wright of the Brumbies.

13 Rieko Ioane (Blues): Another New Zealander who cracks the nod for our team, Ioane was one the Blues’ star performers as they finished in first position on the table at the completion of the league phase. Showed that he is settling in nicely at outside centre as he created several tries for his team-mates – especially his outside backs – and he was solid on defence in most of the matches he played in. Other players who caught the eye were Alex Nankivell of the Chiefs, Moana Pasifika’s Levi Aumua and Izaia Perese of the Waratahs.

🔵 Match-winning tackle from Rieko Ioane for the Blues! #CRUvBLU pic.twitter.com/3d7lzz36vQ

12 Roger Tuivasa-Sheck (Blues): This was a tough decision as Quinn Tupaea of the Chiefs, the Brumbies’ Irae Simone and Kalaveti Ravouvou of the Fijian Drua all caught the eye with some fine displays, but we’ve opted for Tuivasa-Sheck, who, despite an injury early on, came back and delivered the goods for the Blues during some tough encounters, especially during the latter rounds. His midfield partnership with Ioane blossomed as the season progressed and they really tested defences with their outstanding attacking play. Tuivasa-Sheck’s great footwork, searing pace and wonderful skill-set provided headaches to defences and he’ll be hoping to continue his fine form if he makes his Test debut for New Zealand in July.

11 Leicester Fainga’anuku (Crusaders): Another newbie in All Blacks coach Ian Foster’s squad, the 22-year-old’s scintillating form for the Crusaders meant he could not be ignored for higher honours. Fainga’anuku proved difficult to stop once he built up a head of steam and it’s no surprise that he finished in third position for metres gained (1,278), joint third for offloads (18) and ninth for clean breaks (11). Hurricanes speedster Salesi Rayasi was next best after several outstanding attacking performances for the Wellington outfit while Timoci Tavatavanawai was also excellent for Moana Pasifika.

10 Beauden Barrett (Blues): Despite a sublime performance from Crusader Richie Mo’unga in the final, Barrett has had a season to remember with the Blues. The All Black centurion’s campaign stumbled to a slow start due to delayed concussion symptoms. Still, the playmaker hit the ground running and reminded the rugby world that he is not finished at the highest level. His ability to attack the line, kick well and distribute is remarkable; adding to this is his blistering pace. Barrett was a key component in igniting the Blues backline, and All Blacks coach Ian Foster will have a severe selection headache at fly-half for the Ireland series. Young Brumbies playmaker Noah Lolesio continues to grow as a player every season, and his hand in the Canberra side’s resurgence this season deserves mention.

9 Nic White (Brumbies): Blues livewire Finlay Christie is unlucky to miss out after a sparkling season that could see him contest for the All Blacks’ starting role against Ireland. However, the experienced White showed his class this season, combining with Lolesio and orchestrating a strong Brumbies season as a pair. The scrum-half’s understanding of various dynamics in the game is impressive, from technical aspects such as kicking and distribution to psychological aspects of being in the referee’s ear or the face of the opponent. The Wallaby is a true competitor and put together a stellar season.

8 Pita Gus Sowakula (Chiefs): Possibly one of the most competitive positions across the team, with Blues star Hoskins Sotutu, Hurricane Ardie Savea and Red Harry Wilson all having memorable seasons but missing out on selection. Chiefs star Sowakula has well and truly caught the rugby world’s attention, first with a bizarre try that saw him hurdle an Aaron Smith tackle and following that thanks to sheer work rate and ball-carrying ability. The number eight ended with 15 offloads, and 171 carries in the season and was influential in adding dynamism to a Chiefs pack that struggled with injury. Sowakula’s fine season earned him his first All Blacks call-up.

How good is this from Pita Gus Sowakula 🤩

Catch all the action live on Sky Sport

7 Dalton Papalii (Blues): One of the players of the season. The Blues skipper transcended his game this season, showing maturity in his leadership role whilst emptying his tank every single game. The Auckland side always looked better with him on the field and his leadership was sorely missed in the first half of the final. Papalii has done more than enough to likely be one of the first names in the All Blacks line-up against Ireland. The tireless pair of Tom Christie and Michael Hooper deserve mentions for their impressive seasons with the Crusaders and Waratahs, respectively.

6 Ethan Blackadder (Crusaders): The flank enjoyed one of his best seasons, typified by his remarkable work rate. It is a pity the All Black sustained a serious shoulder injury in the quarter-finals as he looked set to be an important figure for Foster against Ireland. Despite missing the last two games, Blackadder still notched up a whopping 175 tackles this season. The 27-year-old towered over everyone else in this position and earned a spot in our team. Robust Brumbies flank Rob Valetini deserves a mention after a consistent campaign.

5 Sam Whitelock (Crusaders): The veteran’s technical understanding of the lineout as a facet of the game is excellent. From the physical ability to jump well in that set-piece to reading the game well enough to make effective lineout calls in the correct areas, the legend has it all. Whitelock masterminded one of the best lineout performances in recent history in the final against the Blues, where the runners-up lost 10 on their own throw. The sheer domination in a critical aspect of the game robbed the Blues of any momentum – a truly remarkable performance from an evergreen All Black. The versatile Blues star Tom Robinson and Brumbies second-row Cadeyrn Neville are notable performers from the season.

4 Brodie Retallick (Chiefs): The influence of the All Black on the Chiefs this season was tremendous. Between his time in Japan and an injury concern, the Chiefs were stretched for depth in the second row but managed fine. However, with Retallick in the mix, the team showed their form of old, making it to the semi-final stage. Retallick is a world-class lineout jumper, a tireless worker and a consistent support runner. The All Black is a coach’s dream to power a tight five. Blues star Josh Goodhue and Waratah Jed Holloway were unlucky to miss out on selection after stellar campaigns.

3 Taniela Tupou (Reds): The monstrous front-row enjoyed a strong season with the Reds and held a key role in the forward pack. The Queensland eight were not the same beast without Tupou in the mix. Beyond scrummaging ability, the Wallaby boasts an impressive top speed and all-around skillset. One of the game’s great characters put together yet another good season and will be a threat to Eddie Jones and England. Moana Pasifika captain Sekope Kepu was brilliant for his team, using his experience to guide the side through their first season, while Oli Jager (Crusaders) also impressed.

2 Samisoni Taukei’aho (Chiefs): The hooker was electric this season and was used as one of the Chiefs’ key ball carriers, notching up 143 carries along the way. Taukei’aho performed consistently throughout the season, with ball in hand and set-piece time. A very impressive season earns him a spot in the All Blacks squad. Kurt Eklund was immense for the Blues, while Brumbies star Folau Fainga’a also had a promising season.

1 George Bower (Crusaders): The prop was one of the most improved players this season and made critical contributions during the knockout stages at scrum time. Outside the set-piece, the front-row showed his mobility in broken play and carried the ball well in a balanced season. Bower made very few mistakes in this campaign, earning a call-up to the All Blacks. Chiefs front Aidan Ross put together an electric season but narrowly misses out to the Crusader.