Home Super Rugby Super charged: Final round battle of the wings and a play-off spot up for grabs 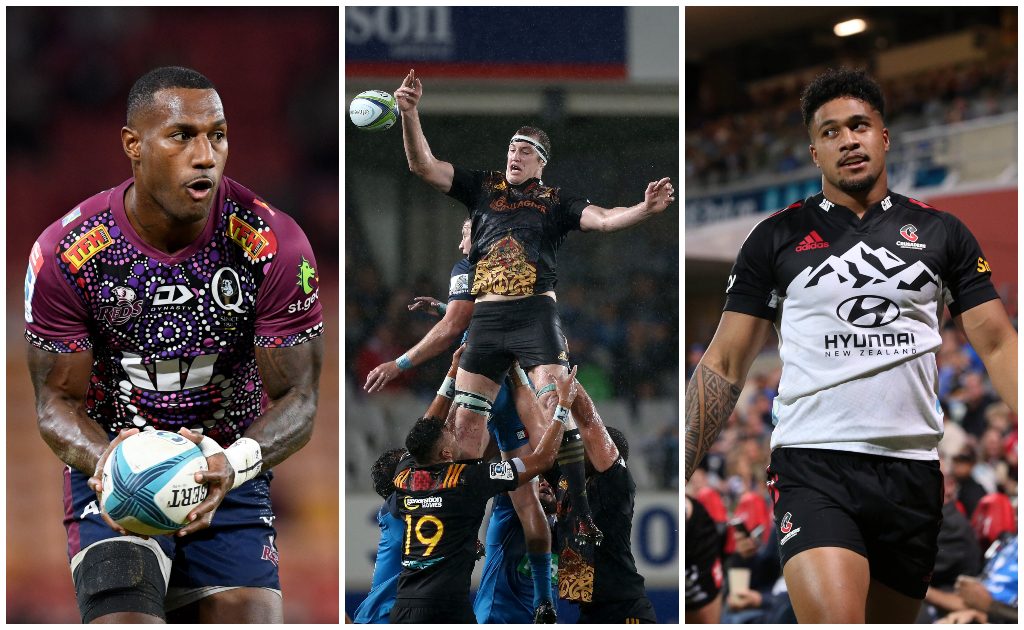 Making its return, we bring you Super charged, in which we preview the main talking points ahead of the next round of Super Rugby Pacific action.

Heading into the final round, both teams have secured a spot in the inaugural playoffs for Super Rugby Pacific.

The Waratahs have an outside chance of a home quarter-final as they sit four points behind the fourth-placed Chiefs. Meanwhile, the Blues have an unassailable lead at the summit.

The Waratahs have won their last three games, including an impressive victory over the Highlanders in Dunedin last time out. They will be looking to get one over the title favourites who have fielded a weaker team to manage player workload.

It is a golden opportunity for the New South Wales side, which has quality across the park. Veteran Michael Hooper is back to his best as the rugby world has come to expect, and the return of prop Angus Bell to the starting line-up will be a boost at scrum time.

The backline is settled, and the half-back partnership between captain Jake Gordon and young star Tane Edmed has been key to their attacking output in the last few games.

Realistically the race for a home quarter-final is against them, with the Waratahs needing a bonus-point victory and other results to go their way.

On the other hand, the Blues have earned the right to manage their player workload, having been excellent throughout the season and looking like the team to beat this year.

Significant changes across the board open the door for the Tahs, but stand-in captain Luke Romano still expects his side to push for the win.

It is a good position for the Auckland-based side to be in, and having their stars rested for the crucial play-off period might pay dividends, but for now, their focus will be locked on the Waratahs.

The Sydneysiders may have fielded a side with more experience and form players, but the impact of a high-flying dressing room could bring out the best from a new-look Blues team.

There will be plenty at stake for both these teams when they head into battle in what promises to be an entertaining encounter at HBF Park in Perth on Saturday.

The home side are currently in ninth position in the standings with 19 points amassed from their 13 matches played so far and will be determined to secure a bonus-point triumph over the Hurricanes to put pressure on the Highlanders, who are in eighth.

However, the Force will have to deliver their best performance of the season if they want to beat the Hurricanes as they head into this match in poor form. They were currently on a seven-match losing streak after losses to the Brumbies, Rebels, Waratahs, Blues, Crusaders, Highlanders and Chiefs before they beat Moana Pasifika on Tuesday.

They face a Hurricanes outfit, who will also be a team on a mission. The men from Wellington still have an outside chance of finishing amongst the top four places on the table which will secure them a home quarter-final.

With the Force in poor form, Jason Holland’s charges will be quietly confident of sealing a bonus-point victory which will give them 43 points on the table but they will also be rooting for the Fijian Drua in their encounter against the Chiefs in Lautoka. A Drua win will see the Hurricanes moving above their New Zealand rivals into fourth spot in the standings and secure them that home quarter.

The Chiefs received a shot in the arm with the news that the All Blacks second-row is set to make his return to action after spending the past two months on the sidelines with a thumb injury.

Retallick’s inclusion is a timely one as his experience and outstanding skill-set will come in handy when the Chiefs go up against the Drua at home on Saturday.

This match is a potential banana skin for the Hamilton-based outfit as the Drua showed in their previous match in Fiji – the 27-24 defeat against the Highlanders in Suva in Round 11 – that they are competitive on home soil.

But having Retallick back will boost the Chiefs’ chances as the 30-year-old is arguably the best lock in the world once he hits peak form. With Super Rugby Pacific nearing its business end, Retallick will be keen to hit the ground running as the team looks to hold on to fourth spot.

A powerful and experienced lock, Retallick usually shines in the execution of his core duties but also possesses other impressive traits with his excellent offloading game and deceptive pace sure to test Drua’s defence.

Two athletic speedsters face each other on the wing this week, with Vunivalu looking to string a couple of good performances together after  an injury-filled campaign for the former league star.

Meanwhile, the red-hot Fainga’anuku will be looking to extend his lead at the top of the try-scoring charts.

Vunivalu has started to find a bit of form, scoring against the high-flying Blues in Round 13, but only played 40 minutes against Moana Pasifika last week.

There is no questioning the sheer talent and physical ability he possesses. It is only injury that hampers the flyer. Therefore, it is absolutely crucial for the code-hopper and the Reds that he can make it injury-free through the play-offs.

The 26-year-old has work to do if he is going to convince Wallabies coach Dave Rennie that he has the fitness and form to face up against England in their upcoming Test series. Battles such as this will be under the watchful eye of Rennie.

Fainga’anuku has been one of the most impressive players this season and has underlined just how prolific he is, scoring multiple tries in quick bursts, whether through support play or a by-product of his ridiculous skill-set.

Fainga'anuku has a first-half hat-trick – but this one was the best of the lot! 🤩

The 22-year-old may not be in the All Black picture, but it is battles like this that can continue his rise in stature and could continue to showcase his natural ability to cross the whitewash.

Two wingers searching for different things from the game makes for a mouth-watering clash in the final round of Super Rugby Pacific.

The play-off picture is mostly clear heading into the final round of the inaugural Super Rugby Pacific season, with the final place the only spot in question.

The Highlanders are in eighth place, only three points above the Western Force giving the Western Australians a slim hope of a play-off spot.

However, the Highlanders face the hit or miss Rebels in Melbourne whilst the Force welcomes the Hurricanes to Perth, putting the odds with the Dunedin men.

Aaron Smith, who has recently broken into the top five most capped Super Rugby players, will need to draw on all of his experience to get his team over the line. The Highlanders have had a poor season but have shown glimpses of their true potential. They will need to avoid slipping against another Australian side to qualify. It is a simple equation; win and qualify.

It is not so simple for the Force, who need to find a way to beat a Hurricanes side that has begun to find their rhythm, and hope that the Rebels get one over the Highlanders.

Whilst the odds are against the Force, it makes for a dramatic final round in the regular season before heading into the business end of the campaign.