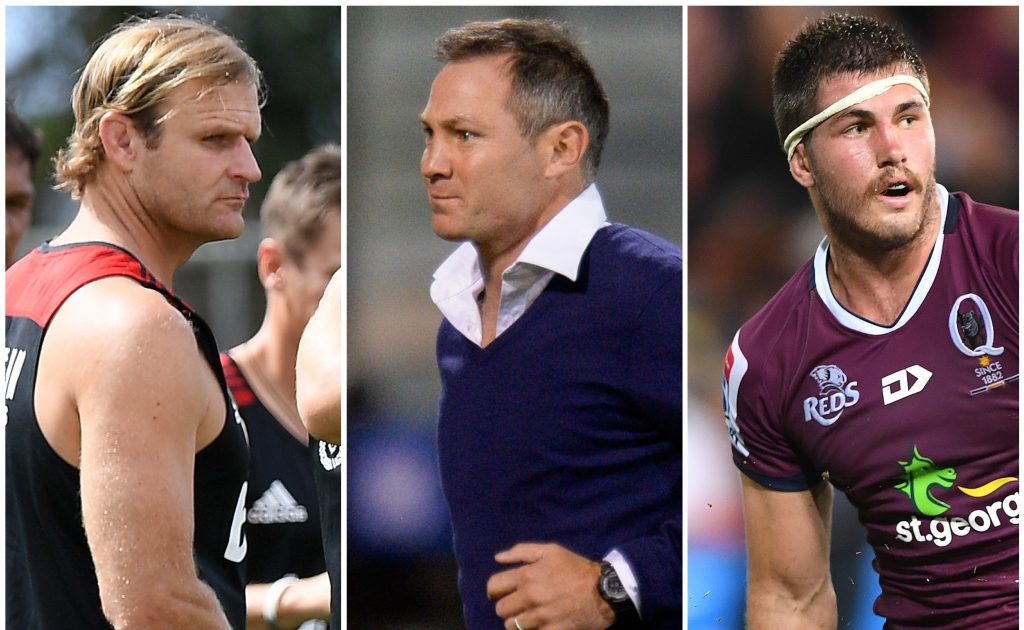 Before this weekend’s Super Rugby AU and Aotearoa games, Planet Rugby previews the biggest talking points ahead of the action.

The Crusaders find themselves in unfamiliar territory and will be determined to return to winning ways when they host the Blues in Christchurch on Sunday.

Scott Roberson’s men came unstuck for the second time in three weeks last weekend as a late Damian McKenzie sealed a 26-25 victory for the Chiefs in Hamilton. To make matters worse for the champions, they will take on the Blues without All Blacks duo Jack Goodhue and Joe Moody, who sustained ACL and foot injuries respectively during that defeat.

The loss capped off the Crusaders’ worst three-week period during Robertson’s tenure, but they shouldn’t be too concerned as their performances have improved in the last two weeks – against the Hurricanes and Chiefs – after a poor overall display during a shock 33-12 home defeat against the Highlanders in Round Six.

However, the Crusaders will fancy their chances of bouncing back against a struggling Blues team.

Leon McDonald’s team have won just one of their last four matches and fell to a 35-29 defeat to the Highlanders in Dunedin last weekend. That means, with just two matches remaining in Super Rugby Aotearoa, it is do-or-die time for the Auckland-based outfit.

Should the Blues fail to beat the Crusaders this weekend their hopes of making the final could be over – especially if the Chiefs win their game against the Hurricanes.

The Blues also suffered a setback ahead of this weekend’s fixture when they received news that All Blacks prop Alex Hodgman will miss the rest of the campaign after being banned for three weeks following his red card for foul play against the Highlanders.

Last weekend, the Blues were their own worst enemy as an inability to turn line-breaks into points and poor discipline cost them dearly in Dunedin. If the Blues are to emerge victorious this weekend, they will need to improve otherwise it could be a hugely disappointing day at the office against the champions.

Brad Thorn’s Reds will look to end their Super Rugby AU campaign unbeaten as they travel to Perth to face a Western Force team with everything to play for.

Just two points separate the Force and Dave Wessels’ Melbourne Rebels in the battle for a spot in next weekend’s qualifying final against the Brumbies. For the Force the permutations are simple: win and you are into that play-off.

However, should they fail to pick up all four points, the Rebels could overtake them to move into third place in the standings as they have an easier assignment the winless Waratahs in Sydney.

Nevertheless, one thing is certain: the Force will need to be at their best this weekend, if they are to have a chance against the Reds. Tim Sampson’s men claimed a narrow win against the Waratahs thanks to Domingo Miotti’s injury time penalty as they edged the Sydneysiders 31-30 to keep the dream of a finals berth alive.

As for the Reds, they come into the weekend fully refreshed after last weekend’s bye and will be looking to make history in this fixture. Should the Brisbane-based outfit emerge victorious in Perth, the team will ensure the franchise’s first unbeaten season since 1992 in the old Super Six competition.

That means, despite being assured of a home final, the Reds will not lack any motivation as they will go all out to ensure their retain their unbeaten record.

The Reds’ quest to make history on Friday has been helped by the return of their captain Liam Wright and he’ll be looking to get up to speed ahead of the Super Rugby AU Final in two weeks.

The 23-year-old will be a man on a mission as he missed the bulk of this year’s Super Rugby AU competition with an ankle injury, prior to a 30-minute cameo off the replacements bench in a memorable triumph for the Reds against the Brumbies in Round Eight.

DEBUTANT | Liam Wright, Australia
Reds' flanker Liam Wright looks set to make his Wallabies' debut tonight after impressing in Super Rugby. Can he be the spark off the bench to help them clinch their first Bledisloe Cup in 16 years?#SuperRugby #BledisloeCup #NZLvAUS pic.twitter.com/BdbHHekb5k

With competition for places in the Reds’ starting back-row hotting up, Wright will be looking to use this weekend to build up his fitness ahead of the final.

The five-Test Wallaby will also have the extra incentive of wanting to put himself in the shop window ahead of the Rugby Championship. Although he faces a difficult task – after not being invited to a recent Wallabies training camp on the Gold Coast – Wright is a tough character, who will relish the challenge and he will be determined to hit the ground running against the Force.

Although these two teams have found the going tough in this year’s tournament – with just two victories between them from 14 matches played – they possess two brilliant players in Gordon and Powell.

The battle between these two Wallaby number nines in Sydney on Saturday should be an interesting one as both play important roles for their respective teams.

Gordon started the season on a high when he was appointed as the Waratahs’ new captain but things went pear-shaped as he suffered an ankle injury during a 41-7 defeat to the Reds in their season opener in Brisbane.

The 27-year-old’s stint on the sidelines must have been an agonising one as he had could only look on while his team suffered four more defeats.

He made his comeback earlier this month against the Brumbies and his return has resulted in improved performances from the Waratahs in that fixture and their next one against the Force – although they suffered narrow defeats in both those games.

Gordon’s playmaking ability and leadership skills will be crucial for the Sydneysiders although he will not have an easy ride against Powell, who brings an outstanding skill set and fast-paced style of play to this battle.

Like most scrum-halves, both are feisty characters, who will give their all to come out on top. It should be a closely-fought duel between two highly competitive players.

The Chiefs have become arguably the most fascinating story to watch in the whole of Super Rugby.

Just over a month ago they trying to avoid becoming the first New Zealand side to lose 12 successive Super Rugby matches.

However, after overcoming a 26-7 deficit to beat the Hurricanes 35-29 in their Round Four encounter, Clayton McMillan’s troop have been in red hot form beating every team in Super Rugby Aotearoa, including the defending champions, the Crusaders last weekend.

Can the @ChiefsRugby be stopped?

And after nine rounds of action, the Chiefs find themselves just seven points behind the men from Christchurch in top spot. Whisper it softly, but with two games remaining – and with the Crusaders going through a dip and playing their last league match this weekend – it’s not impossible for the Chiefs to find themselves with a home final.

Look for them to continue their great form as they look to claim their fifth successive scalp when they take on the Hurricanes in Hamilton on Friday.

The ‘Canes find themselves rock bottom of Super Rugby Aotearoa and with the Chiefs’ confidence sky high, don’t be surprised if they continue with their winning streak.