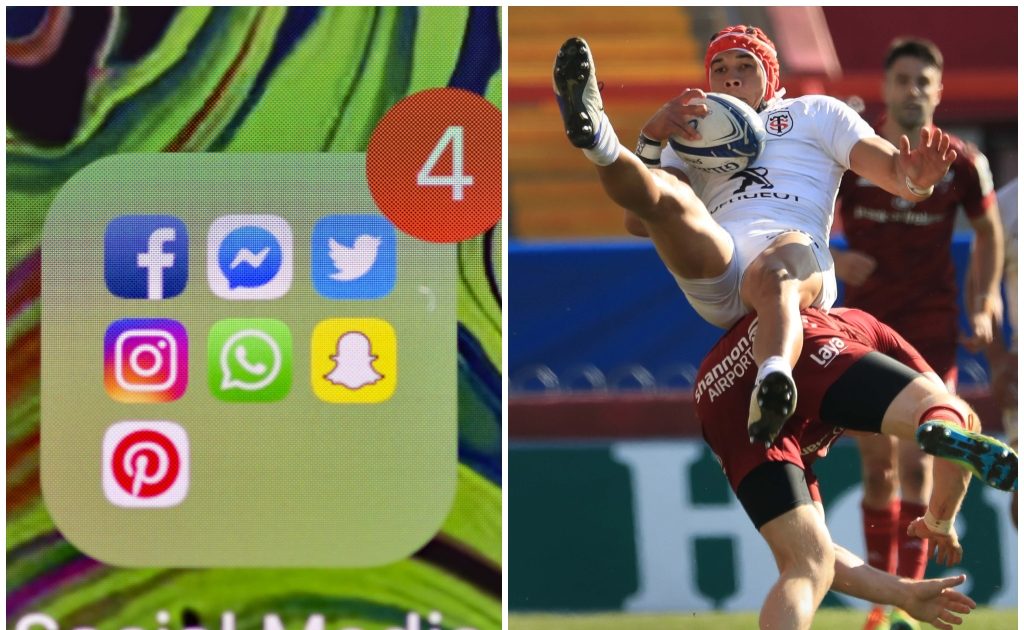 We kick off by wishing you all a Happy Easter and who better on this day to be holding the egg than former England international number eight, Nick.

Speaking of special days and what a moment this was for Scotland flanker Hamish Watson as he was shocked to discover he’d won the Six Nations gong.

#GuinnessSixNations Player of the Championship 🏆

This is how he found out he’d won the award 👀 pic.twitter.com/RrA8M6xBXM

It wasn’t all smiles this week as there was a cancellation of Friday’s Champions Cup showdown between Leinster and Toulon. Everyone was gutted, obviously.

One game that did take place on Friday was Gloucester against La Rochelle. The French side won and here’s coach Ronan O’Gara speaking well afterwards.

He discusses mindset, style of play and coaching the likes of Levani Botia ✨#HeinekenChampionsCup pic.twitter.com/5aI2t3euXL

We couldn’t agree more, Ugo. BT Sport pundit Monye hits the nail on the head here as O’Gara’s philosophy on rugby is always a great listen for rugby fans.

Obviously rugby is still following strict guidelines when it comes to Covid-19 but there’s always room for a joke about the situation as Mark Palmer cracked this.

Horrendous misunderstanding as @craigwatsonpix is told these buckets are for sanitising balls and is now in absolute agony pic.twitter.com/cAdUsKDb2s

From one reporter to a commentator now as Irishman Hugh Cahill showed his skills by taking this kick up in the gantry. He does see room for improvement though.

What about those hands from our commentator Hugh Cahill 🙌

Safe as houses, even with a microphone in hand!

The sun was out in England yesterday which brings up that rare dilemma of how to watch rugby outside. Sam Larner seems to have cracked it. Will it catch on?

Going to extreme lengths to watch rugby and enjoy the sun pic.twitter.com/FbP8eUW8sC

After the game between Munster and Toulouse there was a sighting of South African wing Cheslin Kolbe cleaning up the drinks bottles. Lots of time for this.

🚮 Love this. Cheslin Kolbe tidying up the litter at Thomond Park.pic.twitter.com/jYUZZJLiOU

It wasn’t just the Champions Cup taking place over the weekend though and it is fantastic to see Italian side Benetton make the last eight of the Challenge Cup.

QUARTER-FINALS: HERE WE ARE! 🤩🤩🤩 pic.twitter.com/WgfCe0DrzM

Down south in New Zealand there was a major shock as the Highlanders overcame the high-flying Crusaders in emphatic fashion. Few saw that result coming.

21 – The @Highlanders have won #CRUvHIG by 21 points (33-12), their biggest Super Rugby win ever against the Crusaders. Hunter. pic.twitter.com/qIZHWhj4zA

There was also the Blues v Hurricanes taking place on Saturday and here’s netball player Caitlin Bassett watching the meeting at Eden Park from way up high.

Epic night up on the roof of @edenparknz watching the kick off to the rugby & enjoying the sunset! #skysportrooftoptour #totallyscaredofheights pic.twitter.com/RX8L6rILIx

The Blues would win that game 27-17 which gave All Blacks front-row Ofa Tu’ungafasi the perfect day to celebrate his 100th match for the Auckland-based outfit.

“Ehara taku toa i te toa takitahi
He toa takitini kē” – My strength is not my own
But the strength of many.

Finally, we headed all the way back to 1995 and the Rugby World Cup between Jonah Lomu and Mike Catt here, using the boat situation in the Suez Canal.