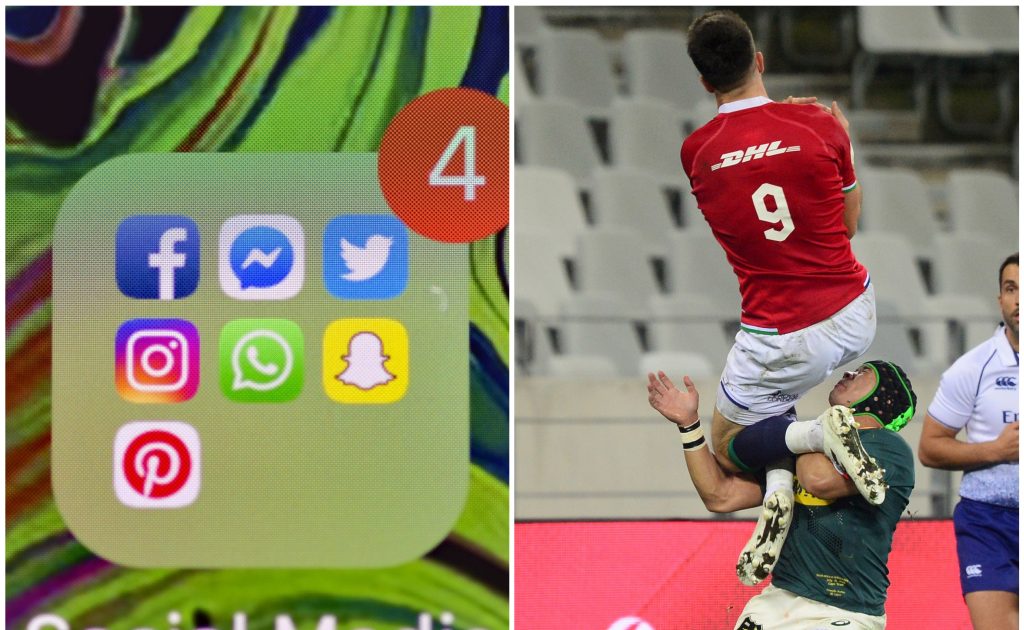 We begin in Cape Town where this aerial challenge from Cheslin Kolbe on Conor Murray was the big talking point in the second Test between the Springboks and British and Irish Lions. Murray’s former Ireland and Munster team-mate Simon Zebo feels Kolbe was lucky not to receive a red card. What do you think?

Was Cheslin Kolbe lucky not to see red? 🤔

Tensions were running high throughout that game and the citing commissioner could be busy this week after watching this incident between Lions second-row Maro Itoje and Bok centre Damian de Allende.

Not a great look from Maro Itoje is it #LionsRugby pic.twitter.com/6rdhCAncjr

Meanwhile, the Boks’ replacement prop, Trevor Nyakane, came on in the second half and delivered a powerful scrummaging display to the delight of his daughter, Skylar, who was watching the game at home.

It was a different story after the first Test and this Lions supporter took a shot where it where it hurts, from one of his kids, while celebrating the famous touring team’s victory.

After watching the British & Irish Lions go 1-0 up in the series, I felt inspired to go outside and help the boys work on their lineouts!

Earlier in the week, much was said and written about Bok director of rugby/water boy Rassie Erasmus’ rant against the officiating in that first Test and Graham Love believes this type of cap would suit South Africa’s fans.

Wonder how many of these I could sell in South Africa? pic.twitter.com/XW0FIo8QYC

Love also went the reality show route, using Come Dine With Me as a reference point to help illustrate how Erasmus lost the plot with his rant.

You won, Rassie. Enjoy it, I hope it makes you happy. Dear lord, what a sad little life. You ruined my night completely so you could level the series.#LionsTour2021 pic.twitter.com/B83yqFiaSw

Meanwhile, prop life at Edinburgh is not always as simple as it looks on matchdays.

Elsewhere, it was a great week for Fiji at the Tokyo Olympics as their Men’s team defended their title while their Women’s side left the Games with a bronze medal.

Blessed & humbled to see this. Whatever is sown shall be reaped. Fiji – we are too SMALL to be divided. UNITED we can. Podium message👇Discipline, unity, veilomani & cakacaka. Let it not only be on the field only. Must start off the field for ALL. #beautiful #Fiji_Made #TEAM pic.twitter.com/GYPfOmdHvV

Jerry Tuwai was the only member of that Fiji team who also won a gold medal at the Rio Olympics in 2016 and his kids sent him this special message while he was in action in Tokyo.

Shout-Out to our Skipper Jerry Tuwai.
His kids Lani and Jone who have not seen their TA for nearly four months have a simple message for him, as Jerry leads our national team to the gold medal final at 9pm.
Thank you Lani and Jone. #TokyoOlympics #HowWeSevens #TosoViti pic.twitter.com/LDLs3mvNxS

Former Harlequins, England and Lions flyer Ugo Monye’s emotions got the better of him while covering the Olympic Sevens for the BBC.

Been a dream to work on the @Olympics and great to be in the studio with Hazel. Thank you for the video @BBCSport 🤣#tokyo2020 #rugby7s #GB7s @TeamGB pic.twitter.com/ChaDapthoH

While the USA Women’s team have a new supporter in their ranks.

This is why we do it.

And finally, check out this hilarious interview which New Zealand’s Ruby Tui gave during the Olympics.

🙌 Loving the energy of the Black Ferns' Ruby Tui.