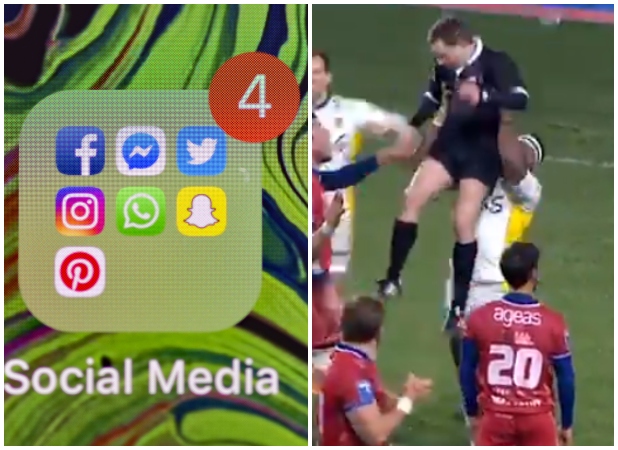 We unsurprisingly start with ‘that’ incident in the French Pro D2 on Friday between Beziers and Nevers when referee Laurent Millotte blew for full-time and was then lifted by Josaia Raisuqe in celebration. Here is the incident itself where the player was shown a red card:

It prompted lots of reaction and the league’s official account added some Lion King music since it was akin to that famous scene.

Plenty also wondered what the quick-witted Nigel Owens would have said in that moment and, as ever, the Welsh referee had a very funny response.

As so many of you are asking what I would have done here. I’d have blown the whistle and said “I’d want to be on Strictly come Dancing before I agreed to be lifted like that” @bbcstrictly 🤣🤣 https://t.co/kzoEuOC0RZ

Elsewhere, there was a controversial incident in the Exeter v Bristol match as Kyle Sinckler swore – rather loudly – after a dangerous tackle by Luke Cowan-Dickie. The lack of crowd evidently did not help but it was very audible to those watching and Sinckler was admonished by referee Karl Dickson.

Really poor form by Kyle Sinckler screaming “Are you Fu**ing serious” at referee Karl Dickson. They are ex teammates but it should have been a yellow card. We berate footballers for similar so we don’t want this in rugby and should respect the ref! pic.twitter.com/m4zWaIwIGV

To his credit, the England tighthead prop did apologise immediately after the game on social media.

Want to apologise for my reaction today. Not the example I want to be setting. Heat of the moment stuff. Will make a conscious effort to improve. My bad 👊

Exeter weren’t necessarily too happy either. While the tackle was indeed dangerous, Cowan-Dickie did propel his arms forward, begging the question as to where rugby players can tackle their opponents.

You can now tackle to low in rugby 😂

Despite those much discussed incidents, there was plenty of excitement on the field, with Newcastle Falcons’ Adam Radwan scoring a stunning try in their win over Gloucester.

After tasting defeat in Round 5️⃣, @FalconsRugby bounced straight back against Gloucester 💪

And what a start it was for the hosts, Adam Radwan scoring this beauty in the game's opening stages 😍#GallagherPrem highlights and full match replay ➡️ https://t.co/ObeyIUmZ9S pic.twitter.com/aTMHSOvIj8

Another wing also impressed as Paolo Odogwu put in a superb performance as Wasps beat Bath 52-44 on Friday in a thrilling encounter.

Meanwhile, Northampton Saints were remembering some of their great players during the week and brought up a piece of magic from Carlos Spencer.

On the other side of the world, we’re rather excited about this back-row combination:

Dream back-row back on?

Kazuki Himeno's departure to NZ to play for Highlanders has been delayed by #COVID regulations.

Apparently he is still registered with Toyota so could line up next week against Suntory alongside Kieran Read and Michael Hooper.#rugbyjp #TopLeague pic.twitter.com/Zbg7UTOi0Y

Finally, staying in Japan and Freddie Burns, who is currently at Toyota Industries Shuttles, revealed how they settle matches which end in draws.

Thoughts on this kind of thing coming into Premiership rugby when a game can’t be played due to Covid? 🤪🤷🏽‍♂️😂

After a 19-19 draw in the Uni knock out stage, instead of extra time the captains pick an envelope to decide to winner. #onlyinJapan 🤯😂😂 pic.twitter.com/BCEIAKBgaw