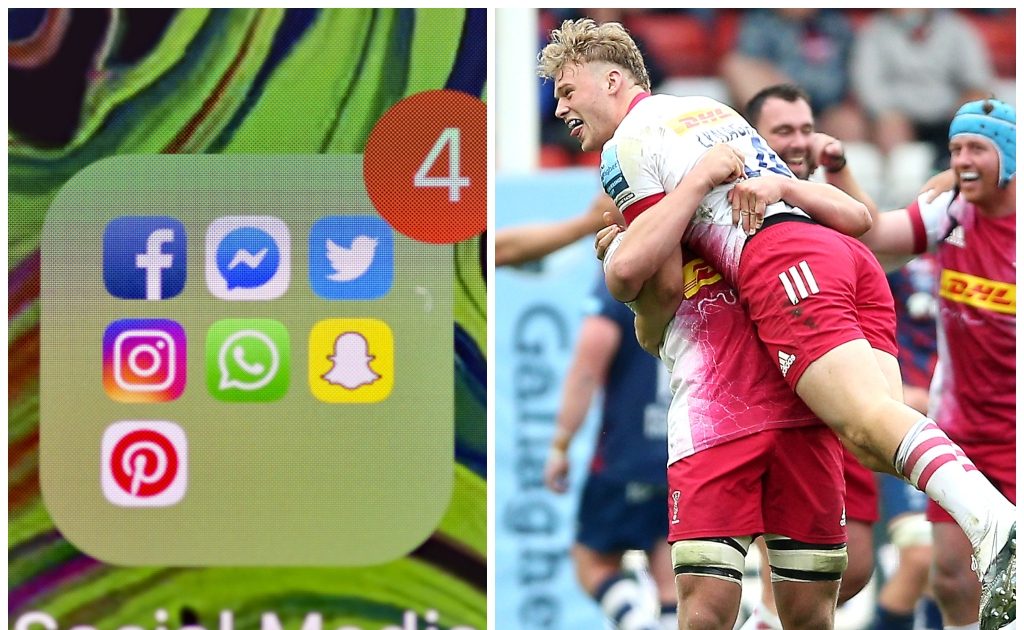 Where else to start but that incredible game at Ashton Gate. Bristol Bears and Harlequins, take a bow, with Brian O’Driscoll summing it up perfectly.

Have never seen a better @premrugby game than the semi between @BristolBears & @Harlequins. Had everything (bar a red card thankfully). If you’ve missed it turn off your phone, go into hibernation until you sort a recording of the replay on @btsport and enjoy 80+ mins of quality.

How Quins fought their way back from 28-0 down just before the break to win we’ll never know and RugbyInsideLine said what we were all thinking.

Are Harlequins at Royal Ascot today, because they’re certainly not at the races in the West Country?!

It’s all the more amazing from the Twickenham Stoop side seeing as their upsurge in form and final push has taken place without a director of rugby.

It was understandably jubilation on the sidelines and in the crowd late on and here’s injured Quins player Will Evans in amongst it with the supporters.

Extra-time and all the action left everyone needing a breather at the end, but there was little time to chill as Exeter Chiefs v Sale Sharks was next up.

It was the Chiefs who fought their way into the final to face Quins and here’s a thankful Luke Cowan-Dickie speaking well about the team and supporters.

"The boys are loving it!"

🏆 @1_Dickie and his team-mates have a trophy to defend! pic.twitter.com/LuUaRJuzDY

Soon after, perhaps the story of the day unfolded in Italy as Benetton completed a remarkable PRO14 Rainbow Cup campaign by flooring the Bulls 35-8.

Like with Harlequins and Exeter Chiefs, the celebrations began at the final whistle and we fully expect a few more bottles of fizz were downed in Treviso.

🟢 Benetton's players must be having the best hangover ever today. pic.twitter.com/jtr3WOhSA9

The Super Saturday all kicked off though in New Zealand as the Blues celebrated their first Super Rugby trophy in 18 years after they beat the Highlanders.

Linebreak Rugby summed up the day pretty well here. Honestly we’re struggling to remember a more entertaining day of club rugby. What a treat it was.

One of the best rugby days in a looooong time

With the dust settling on Sunday, rugby’s social media also touched on the fact it’s Father’s Day today and here’s a video of Rassie Erasmus in great form.

Miss them so much today, but this did help pic.twitter.com/Ksfm8Nuk9k

Former Wales and British & Irish Lions captain Sam Warburton also filled us in on life as a dad. His smile, though, suggests it’s all worth it, right Sam?

Finally, two veterans who we don’t think will ever grow up and why not are former Wallabies Matt Giteau and Adam Ashley-Cooper. Loving life, clearly.

When you get to work and your co-worker’s wearing the same outfit. #Giltinis #LARugby #MLR2021 #HereWeCome pic.twitter.com/rhzcRBVfEB