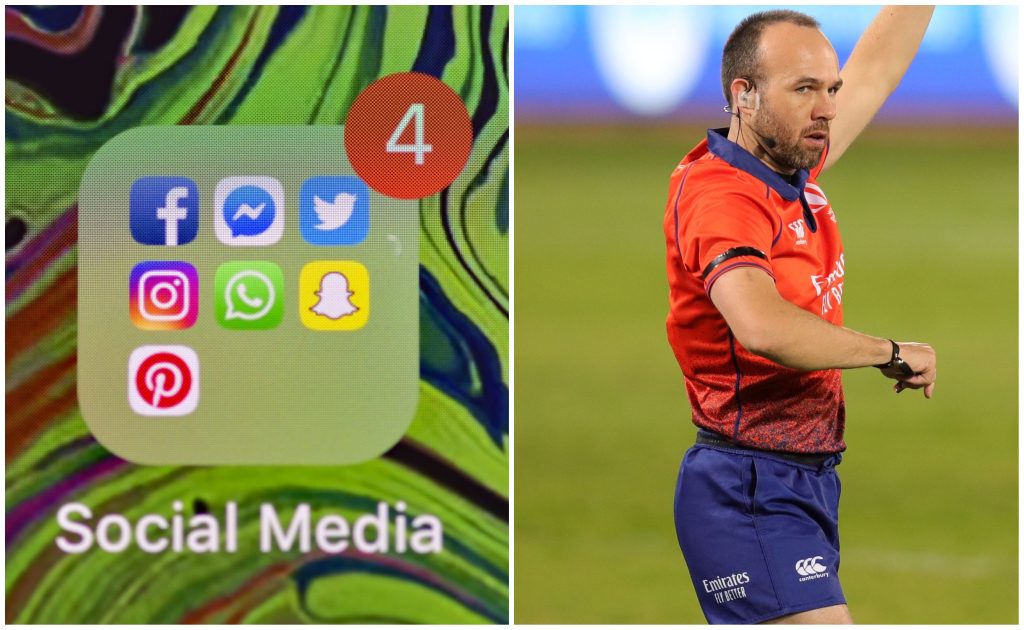 We begin with trick-shot expert The Rugby Guy, Jarryd Harris, who swapped his trademark goose step for an outrageous drop goal attempt. No doubt he will be waiting on the international call-up he so often feels he deserves.

While Brad Weber showed off his kicking accuracy by finding fellow All Black Sam Whitelock while he was on media duties. Scrum-half stereotype achieved.

“OH MY GOD, how are you standing!?” Check out this classic reaction from Andy Christie’s proud mother after hearing that the Saracens player is part of Scotland’s Six Nations squad.

Been a crazy 24hrs, highlight has been telling my family😂💙 @Scotlandteam pic.twitter.com/DSGKNVfusA

Staying in Scotland, where some fans were left shell-shocked following the glaring omission of Adam Hastings from head coach Gregor Townsend’s Six Nations squad. Meme culture did not wait long to pose the question… Where’s Hastings?

Elsewhere, former All Black turned boxer Sonny Bill Williams showed he too is a fan by praising world heavyweight champion Tyson Fury for his character and outstanding skill-set.

It’s been a privilege to see first hand how much of a gentleman @Tyson_Fury is & why he is the best heavyweight in the world. Also seeing my brother @joeboxerparker work his way back to the top has been inspiring. @DavidNyika Your time is coming you beast ✊🏽 #EffemupFridays pic.twitter.com/v7aIb2d2NO

In the Champions Cup, there was also an ULTIMATE Google Translate fail. Clermont prop Peni Ravai an absolute victim in this one.

Sometimes Google Translate just lets you down. This is Clermont prop Peni Ravai. He's not involved @UlsterRugby but if he had been I'd have been tempted to use the English version 😳🤣 pic.twitter.com/llTDWOkC5u

Continuing with the Champions Cup, where the match officials in the Harlequins v Castres encounter received plenty of criticism for the way they handled that match.

I really don't like criticism of officials but that is absolutely horrendous stuff in the Quins v Castres match.
Shocking stuff, time to check betting patterns sort of performance.

The criticism didn’t stop there and Graham Love opted to go the sarcastic route when giving his opinion on fellow Scotsman Mike Adamson, who was the referee in charge of that fixture.

Just to confirm the rumours, that yes Mike Adamson is our revenge to the rugby world after years of being shafted by refs from other nations

While the Irish Independent’s rugby writer Rúaidhrí O’Connor did not mince his words when giving his opinion on Adamson’s performance.

Mike Adamson has absolutely destroyed Castres in this game

In Japan, veteran Wallabies playmaker Quade Cooper showed that he still has some of his old magic with this excellent offload in the build-up to a try for Kintetsu Liners in their Japan Rugby League One Division Two match against Honda Heat.

And we end off with this image of a pie which was not to a French journalist’s liking during the Glasgow Warriors v La Rochelle Champions Cup match at Scotstoun on Saturday night.

A French journalist had his first taste of a Scots pie at the La Rochelle v Glasgow game. He took just one bite and that was it. Here it will remain. pic.twitter.com/9KPX52Rgh9