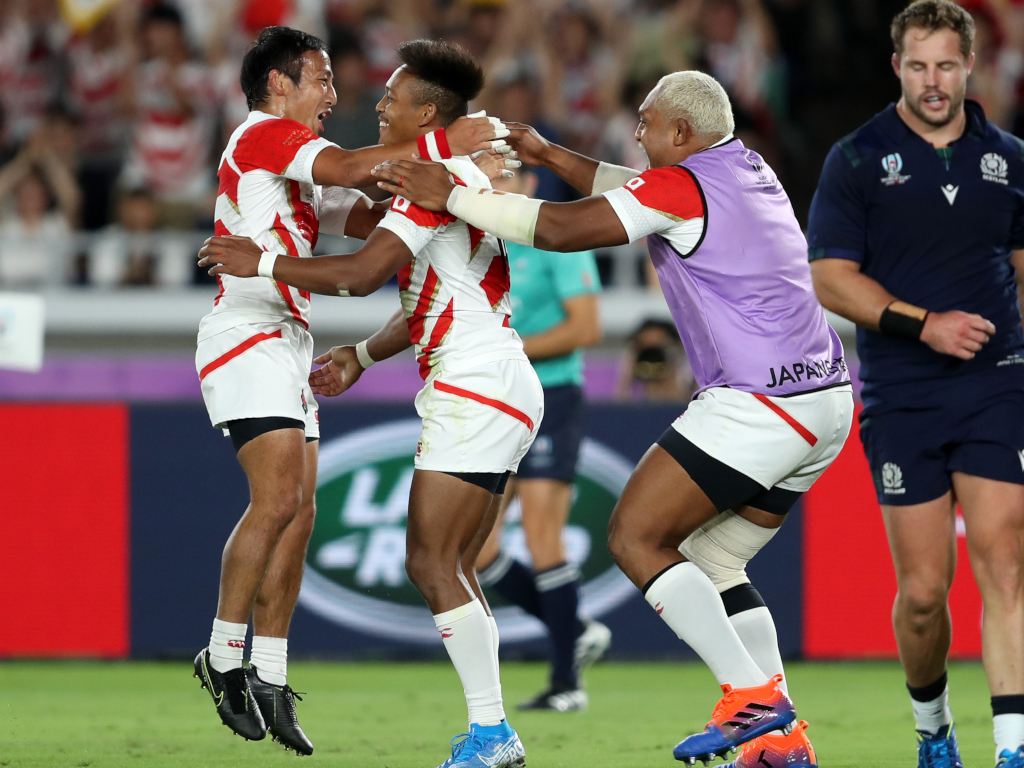 Japan produced a stunning first half display as they qualified for the World Cup quarter-finals for the first time ever following a 28-21 triumph over Scotland in Yokohama.

Gregor Townsend’s men may have started on the front foot with Finn Russell going over, but the Brave Blossoms hit back superbly via Kotaro Matsushima, Keita Inagaki and Kenki Fukuoka.

Fukuoka then went over at the start of the second period to seemingly take the game out of the Scots’ reach, but the Murrayfield-based outfit responded magnificently.

Willem Nel and Zander Fagerson touched down in quick succession to give them hope, but it was not enough as Japan moved through to the knockout stages after one of the games of the tournament.

Despite the final result, Scotland got off to an ideal start as Russell started and finished a move which took them 7-0 ahead.

Firstly, the fly-half produced a well-weighted cross-field kick, allowing Magnus Bradbury to pick up and get to within five metres of the line, and under pressure the Brave Blossoms yielded when Scotland’s star pivot eased his way through a tackle and touched down.

It was a blow for Jamie Joseph’s men, who have not necessarily reacted well when they have been favourites. Against both Russia and Samoa, they struggled at times, but on Sunday the hosts came back firing.

The Asian outfit moved the ball swiftly and opened the space for Fukuoka to speed down the left. Although the back was tap-tackled by Chris Harris, he brilliantly found his wing partner Matsushima to cross the whitewash.

After that stunning response, Japan went one better when Shota Horie, Pieter Labuschagne and Will Tupou combined to send Inagaki over for a wonderful score.

Scotland were now the team under duress and they failed to respond. Instead, the Japanese got stronger and a brilliant Timothy Lafaele grubber was collected and finished by Fukuoka for a 14-point buffer at the interval.

Townsend needed a response from his charges but it initially failed to come as Japan simply increased their lead when Fukuoka stripped the ball from Harris and sped 40 metres to touch down.

At that point, the match – and the Scots’ quarter-final hopes – appeared over but they gave themselves a glimmer when good work from Jamie Ritchie and Stuart Hogg allowed Nel to cross the whitewash.

All of a sudden, the Six Nations side had the momentum and Russell was starting to weave his magic. It opened the space for Scott Cummings and Jonny Gray to combine, and Fagerson was the recipient of their good work to close the gap further.

Although Japan stemmed the tide, Scotland were beginning to create more opportunities as tiredness set in, but the hosts did just enough to run down the clock and oust their opponents from the competition.