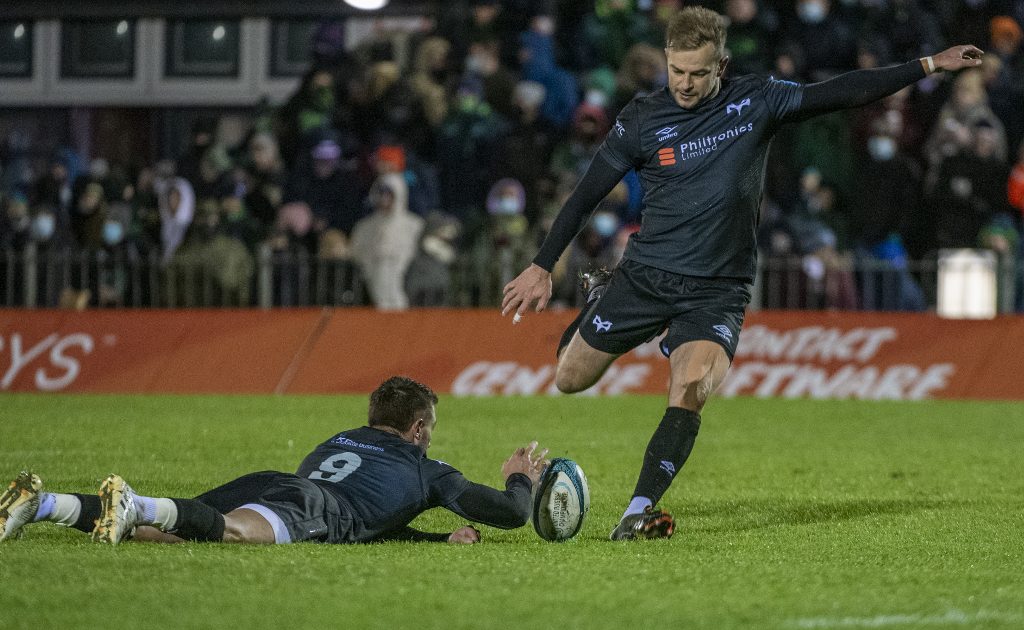 Ospreys fly-half Stephen Myler kicked 14 points to steer his side to a hard-fought 19-13 victory over Ulster in Swansea.

The home side had to rely on an heroic defence, led by back-rowers Morgan Morris and Jac Morgan, to restrict their opponents to one penalty try, despite the visitors dominating in terms of possession and territory.

Morris scored the Ospreys’ only try, with Myler kicking four penalties and a conversion.

Dan Evans was a late withdrawal for the Ospreys with a hip injury, before the home side came firmly under the cosh in the opening stages.

The Ospreys, who beat Munster in their last home fixture, conceded six penalties in the opening 13 minutes as Ulster battered the home defence, but somehow the hosts kept their line intact.

It therefore took a penalty try award for Ulster to open their account, with Luke Morgan being adjudged to have deliberately knocked on to prevent a try.

Morgan was yellow-carded before Myler and Cooney exchanged penalties to leave the Ospreys trailing 10-3 at the end of the first quarter.

Morgan returned from the sin bin before the Ospreys suffered a further injury blow when Evans’ replacement, Max Nagy, left the field with a shoulder injury to be replaced by Gareth Anscombe.

The second quarter was vastly different to the first, with the Ospreys benefiting from a number of penalties in their favour to have an equal share of the contest, and they drew level when Morris stormed over from close range.

Myler converted and kicked a penalty as Ulster lost Welsh international hooker Bradley Roberts to a leg injury, leaving the visitors to wonder how they trailed 13-10 at the interval.

Five minutes after the restart, Ulster brought on international prop Jack McGrath for his first appearance in over a year as Dan McFarland’s side resumed their domination.

Cooney and Myler exchanged penalties as the second half mirrored the first and the Ospreys grew in influence as the half progressed.

Myler kicked a fourth penalty after the visitors’ scrum had infringed and the home side went on pick up a valuable four points, which for large parts of the match looked highly unlikely.

Meanwhile, the Lions picked up their first win since the opening round of the United Rugby Championship as they triumphed 37-19 over the Stormers in Cape Town.

The Johannesburg outfit had not registered a victory since beating Zebre Parma in Italy on the opening night of the campaign, but tries from Francke Horn (2), Andre Warner and Vincent Tshituka – and 17 points from the boot of Fred Zeilinga – saw them overcome the Stormers.

Stefan Ungerer, Seabelo Senatla and Andre-Hugo Venter crossed for the home side, with Manie Libbok and Tim Swiel kicking a conversion apiece.

Glasgow Warriors moved up two places to fifth position in the United Rugby Championship table after defeating the Dragons 33-14.

The Scottish outfit were in control throughout and took a 19-0 advantage into the break thanks to tries from Sione Tuipulotu, Kyle Steyn and Jack Dempsey.

Ali Price sealed the bonus-point for the Warriors before the Welsh region finally got on the board through Ellis Shipp.

Johnny Matthews then crossed the whitewash for Glasgow to take them over the 30-point mark but the Dragons had the final word when Mesake Doge touched down. It didn’t hide what was another disappointing evening for the visitors, however.