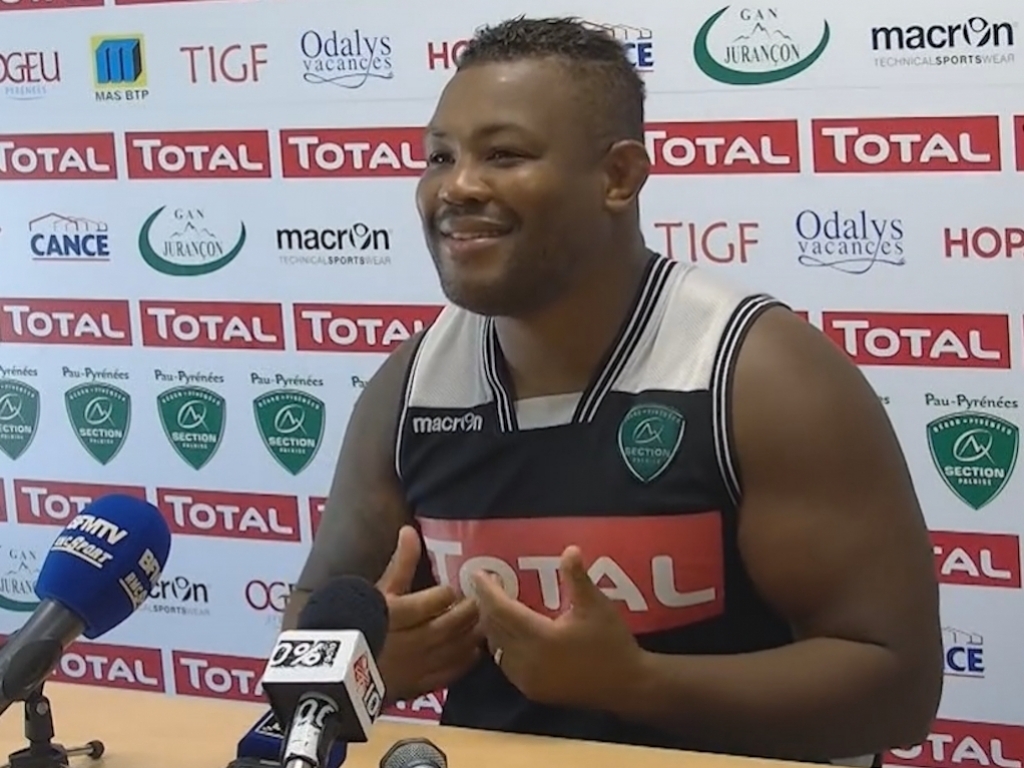 The Pau flanker opens up on playing for England, Mourad Boudjellal, his departure from Toulon and high hopes for Section Paloise.

Steffon Armitage around 18 months ago seemed set for a return to English rugby having achieved everything he could with Toulon. Instead today he finds himself preparing to play in Bath in the Challenge Cup for Pau.

Swapping the silverware chase for trying to convert Pau’s lofty ambitions into a reality is a challenge, no doubt about it. The club are 12th in the Top 14 after the first eight rounds of the new season. “It is definitely different, not the easy life anymore playing at the top of the table.”

Making the move to Pau at the same time sounds like the type of test Armitage needed.

He moved to the Stade Félix Mayol from London Irish in 2011 and was part of the team who won three straight European Cups between 2013 and 2015, lifting the Top 14’s Bouclier de Brennus as well in the middle of that remarkable run in the same year that he was crowned European Player of the Year.

He might have been playing in France, yet throughout that time Armitage was at the forefront of every single discussion surrounding England’s squad selection; leading to continuous scepticism over the meaning of what the “exceptional circumstances” rule regarding overseas players truly meant as he dominated all matches with his ability over the ball at the breakdown.

When news filtered out of the Côte D’Azur that Armitage was looking to leave Toulon before his contract expired, the assumption was that it was to return to the Premiership to fight for an England place. Instead he followed his old team-mate and new Pau assistant coach, Carl Hayman, after the club paid Toulon a reported transfer fee of €250,000. The choice was far from difficult.

“In the end it was an easy decision,” he reveals.

“Obviously it would have been good to join my brother at Lyon to carry on playing with him. But I felt like I needed to try and create something different. And the best place was to give Carl Hayman a chance to succeed as a coach, and I said I would do whatever I can to try and make it easy for him by giving him a go, because he has helped me along my way for quite a while.

“Sometimes it isn’t the things that people say that makes you respect the most. It’s what they do. Carl is one of those guys. You saw him on the pitch, for a prop to do 70, 80 minutes these days, week in week out, is an amazing thing. The way he leads the team, he makes people follow him.

“Then there are the little things, the days you come in when you feel a little bit down, or not playing, and he will be in your ear saying ‘don’t worry, I have faith in you.’”

Playing alongside Hayman and other greats of the game in Ali Williams, Bakkies Botha and Jonny Wilkinson, Armitage embodied Toulon’s rise to the top of the European game during his five years at the club.

The departures of that quartet were mourned. Yet the way Armitage’s time with the club ended feels sour. Mourad Boudjellal, the owner of the club who “made me as a player”, as Armitage puts it, turned what could have been a good-natured gesture to one of his stars after years of success into a complicated period of frustration.

“Myself and my wife, we made Toulon our home. It made me as a player. London Irish took me to where I needed to be, but being at Toulon took me above that. All the medals and the trophies… I will never forget it – it is always on my mind what we achieved. It’s a really special part of my life. It was the right time to go. We won everything at Toulon,” Armitage explains.

“I can’t really say I interacted with [Boudjellal]. He didn’t interact with anyone. He is a special kind of guy, in every way possible… but at the end of the day he kind of made me want to hate Toulon when I was leaving, by making it difficult.

“He was quite happy to get rid of me but he was making crazy offers for me to leave, in terms of transfer fees and everything.

“That was a horrible part after spending five years at the club, and then to go through all of that. I literally hated rugby.”

Pau might not be an armchair ride, but the challenge sounds as though it has put Armitage back in the right frame of mind. Building something special at this stage holds plenty of value for him, being another chance to prove the doubters wrong.

“I felt like I needed something to give me more fight, and I think Pau was the right place. They have great plans for the future. We are not doing too well at the moment but we’re centimetres away, and one win from fifth place,” Armitage said.

“All of the games so far, the reason we lost was ourselves, except Montpellier. The youngsters pushing the old guys are brilliant. We don’t have a lot of well-known players but they are ready to make the step up to be the best, in the footsteps of the Colin Slades and Conrad Smiths and Julien Pierres.

“There was a chance of going to Bath or Wasps. It worked out along the line having spoken to them both, and everyone, that the best option was to stay in France. I still feel like I have things to learn to become a better player, and I’m doing that in France.

“You have so much competition every day, it is like you are playing for your life, for your last game. You don’t know what is going to happen.

“Being honest, all my life I have been trying to prove people wrong. They would say I was too short to play, or too short and overweight to play in the back row. I’m used to it and I like it, because it gives you that extra push.”

Devoting himself to that task for at least the next two years means there is no chance of an England recall, a decision Armitage now feels comfortable with. He like everyone else has seen the success under Eddie Jones and recognises the team is moving in the right direction.

The reason for that acceptance doesn’t come down to a realisation that the window on his Test rugby career is closing. More that it was never truly open in the first place for him to make his mark.

“In 2010 I had one of my best seasons with London Irish. We went to Australia and [Lewis] Moody had played 30 minutes of Premiership rugby in the last six months, and he ended up starting all three Tests, even though they had told me I was the number one flanker.

“Now it has just got to the point where, do I go back and hope I get in… but it doesn’t matter if you are good enough, or if you are the best?

“I think that [Danny] Cipriani has been playing awesome rugby – how is he not in the team? He has been overlooked every single time. That is the way I look at it. Sometimes it is not just all about who is the best player.

“Loads of people were talking about me [playing for England], but it would have been nice to hear it from the England selectors. I had one conversation with them over how many years. I’m not going to go by what my agent or other people are saying, sometimes you just have to hear it from the main people.

“The last time was when Stuart Lancaster came over to Toulon. I can’t even remember when that was to be honest. I can’t really complain about it. That’s life.”

LONDON – FEBRUARY 07: Brothers Delon Armitage (L) and Steffon Armitage (R, debut cap) pose in the locker room after their team’s victory in the RBS 6 Nations Championship match between England and Italy at Twickenham on February 7, 2009 in London, England. (Photo by David Rogers/Getty Images)

A conclusion based off that would be that Armitage resents not adding to his five Test caps, except that is far from the case.

Speculation two years ago that he would look to try and play for France, through the newly introduced eligibility rules where players could switch their international alliegances through playing in Sevens tournaments – Tim Nanai-Williams being an example for Samoa – had no substance whatsoever.

The pride he feels six years later remembering his first cap shows how much playing for England still means to Armitage.

“It was just everyone talking. Philippe Saint-André put my name down on a list, but everyone knows that while he is a good guy, he kind of does what he wants. It was all rumours.

“One of my greatest memories and greatest things I have ever done was playing at Twickenham with Delon for England.

“Playing for France? It means nothing. That moment, that first game against Italy, is always going to be a great souvenir for me.”

What if England had come calling though, even just to let him know he was on the radar. Might he have moved back to the Premiership instead of staying in France?

The chances are it would have been seriously considered, which means given England’s current deficit of fit openside flankers ahead of the November Tests, Armitage’s named would have been in the conversation.

Armitage instead will get his head down and give his all to making Pau into a force to be reckoned with, starting against Bath this weekend. That sense of unfinished business with England though still lingers.

“If anyone had spoken to me, I might have really, really considered it. And I was considering going to Wasps. The England coaches weren’t saying it, and they can call any player they want.

“I have always said that all I have to do is put my head down and play rugby. That is what we’re here for, to play, not to make decisions. I kind of wanted the decision to be made for me, but no one helped.”