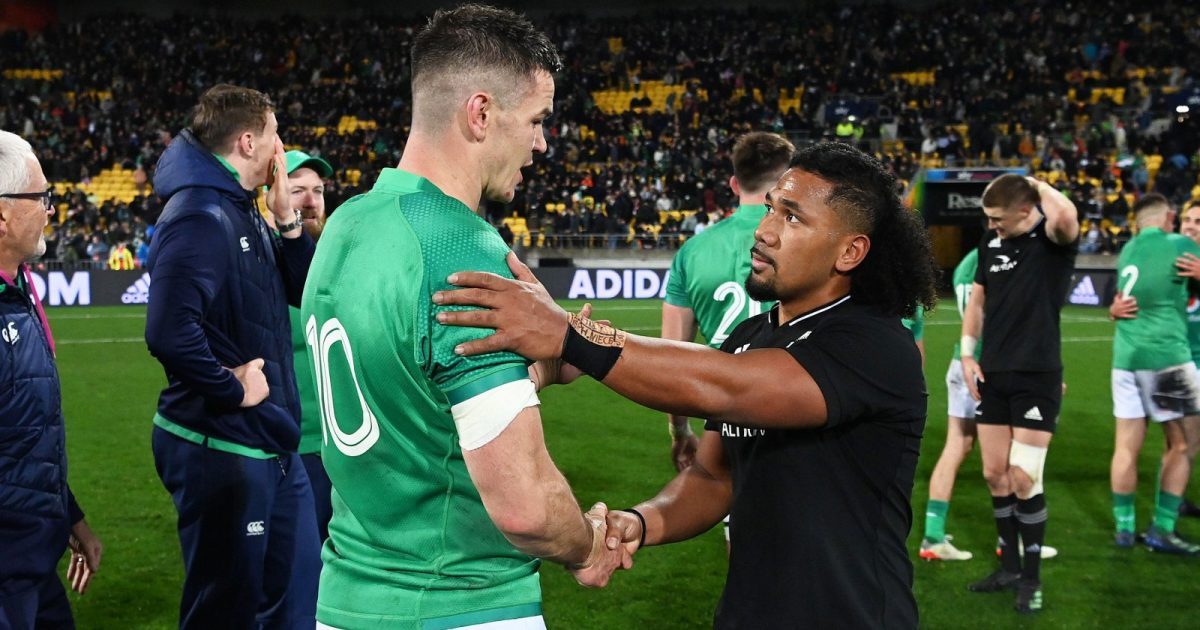 Now that the 2022 July internationals are wrapped up, we delve into the state of affairs in each of the northern hemisphere nations. Next up, Ireland.

This year’s campaign will live on long in the memories of Ireland head coach Andy Farrell, the rest of his backroom staff and players as the men from the Emerald Isle made history by becoming the first northern hemisphere team to win a Test series against the All Blacks in New Zealand since the advent of professionalism.

Apart from that, the Irish came into this series with a mountain to climb as they had not managed to beat the All Blacks on New Zealand soil in 12 previous Tests there since their first one in Wellington in 1976.

However, Farrell and his charges were quietly confident as they had come out on top in three out of their last five Tests against the All Blacks. And although the tour started in the worst possible way with back-to-back defeats against the Maori All Blacks and in the opening Test, the Irish deserve plenty of credit for the way the midweek side and especially their Test team bounced back in their last three fixtures.

After finishing in second position and with a Triple Crown in this year’s Six Nations – with just one defeat to eventual champions France – there was plenty of optimism amongst Ireland fans ahead of their first tour to New Zealand since 2012.

Ahead of the All Blacks series it was said in some quarters that just one win in the three Tests would make this a successful trip for the Irish. Farrell obviously had other ideas and did well to mastermind some impressive wins in the latter stages of the tour.

With the bulk of his 40-man squad hailing from Leinster, and with most of them starting in the Tests, there were genuine fears that Ireland were in danger of suffering a similar fate as their strongest province, who came off second best in the physicality stakes in their Champions Cup final loss to La Rochelle and the United Rugby Championship semi-final defeat to the Bulls respectively.

But despite suffering a big loss in the opening Test in Auckland, Farrell stuck to his guns by making just one change to his starting XV, with Mack Hansen coming in to replace Keith Earls on the wing, for the last two Tests. There was also controversy after veteran fly-half and captain Johnny Sexton, who left the field in the first half of the opening Test with a head knock, was ruled fit for the Dunedin showdown and he played a big part in helping Ireland to win the series.

Most coaches would have swung the axe to their team after such a big defeat (42-19) but Ireland had some good moments in that encounter – especially during the early stages – and Farrell opted to give the same players another opportunity in that second Test in Dunedin. That calculated risk paid off as they got the better of their opponents in most facets of play in that encounter and the deciding third Test in Wellington.

Although he played a minimal part in the opening Test, the evergreen Sexton made his presence felt during the final two Tests and despite being 37, he was a vital cog in the Irish machine and it’s hard to see them going to the World Cup without him as he showed once again that he can still compete – and shine – at the highest level.

Sexton’s game management was superb in those latter Tests with his kicking – at goal and out of hand – playing a big part in the All Blacks’ demise in both fixtures. He also impressed with his attacking play and did well to unleash his outside backs at crucial moments which showed that he still has plenty to offer.

Elsewhere, Ireland’s forwards were thoroughly outplayed at Eden Park but there was a remarkable turnaround in their performances in those second and third Tests and one can only wonder if they would have had the same end result had there been changes aplenty as some key players came to the fore with outstanding individual efforts when they had their backs to the wall after that first game.

In the front-row, Tadhg Furlong was his usual steady self in all three Tests while Dan Sheehan and Andrew Porter got better as the series progressed and the trio were a big part of Ireland’s physical dominance in Dunedin and Wellington.

Physicality proved crucial throughout and by the end of the series Ireland really dominated that department. One player who really took the fight to the All Blacks in that facet of play was Tadhg Beirne, who was the star performer for the visitors in Wellington as apart from his excellent physicality he bullied the All Blacks at the breakdown, impressed with his lineout work – along with James Ryan – and shone on defence.

Much was made of All Blacks second-row Sam Whitelock’s absence in the second Test due to concussion and ahead of the final Test many observers expected him to be influential in the lineouts, but Beirne and Ryan took him to the cleaners and their dominance at the set-piece was a big contributing factor in their victory. Defensively, Ireland also put in a huge shift with Josh van der Flier leading the way with 62 hits over the three Tests, which was at least 17 tackles more than any other player during the July internationals.

There were also excellent contributions from Ireland’s New Zealand-born players Jamison Gibson-Park, James Lowe, Bundee Aki and Joey Carbery, who would have had extra joy after beating a team they would’ve dreamt of playing for as youngsters.

While the senior team were hitting the headlines, Ireland’s dirt trackers were going about their business in a quiet and effective manner and there were huge contributions from the likes of Gavin Coombes, Nick Timoney, Jordan Larmour and Ciaran Frawley as they drew their two-match series with the Maori All Blacks.

The big question is if Ireland will be able to maintain their current form until next year’s World Cup where they will be hoping to reach the semi-finals for the first time at the global showpiece. It must be remembered that prior to the 2019 showpiece in Japan, Ireland were also in a similar position to where they are now as they beat the Wallabies 2-1 in a mid-year Test series in Australia in 2018 before downing the All Blacks in an end-of-year international.

With them occupying the number one spot in the World Rankings at the moment, there will be a marker on Ireland’s back as other nations will have extra motivation to take their scalp. Ahead of next year’s Six Nations, Farrell and his coaching staff will turn their focus to their end-of-year internationals against South Africa, Fiji and Australia, with their November 5 clash against the world champion Springboks at the Aviva Stadium generating plenty of interest as tickets for that encounter are already sold out.

Overall, Farrell will approach those matches and their 2023 Test programme with plenty of confidence as he has a healthy core of senior players who will be expected to lead the onslaught, but there’s also plenty of depth in reserve who have shown great promise and are hungry to make the step up.

READ MORE: State of the Nation: Gutsy Wales make strides despite losing the series to the Springboks