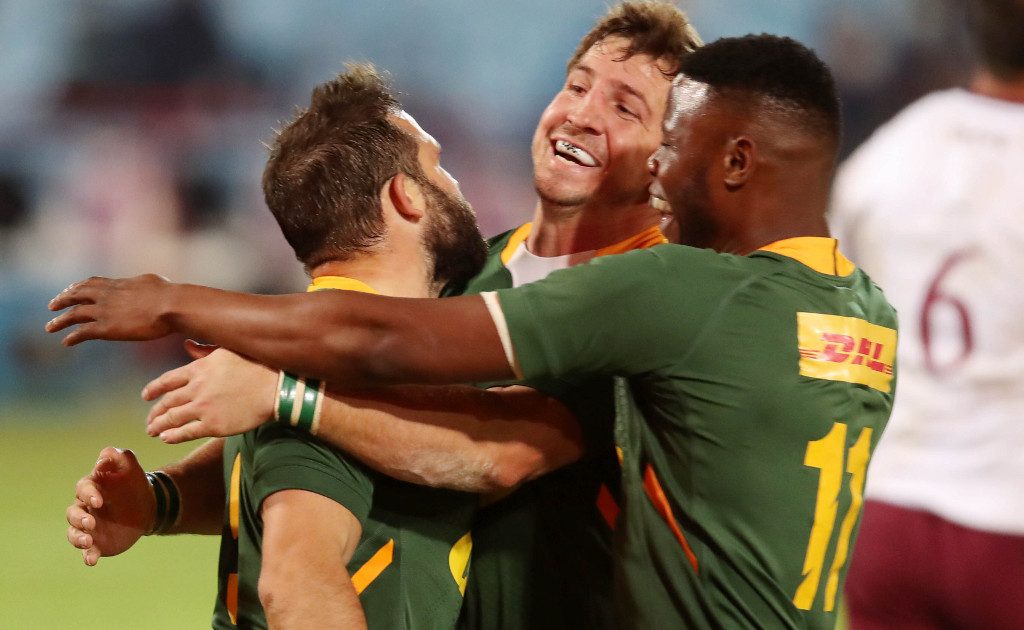 South Africa made a winning return to Test rugby when they sealed a 40-9 victory over Georgia at Loftus Versfeld in Pretoria on Friday.

It wasn’t a vintage performance as there were signs of rustiness from the Boks, who were playing their first game since their triumphant 2019 World Cup campaign, but they improved as the match progressed and eventually outscored the Lelos six tries to none.

The Springboks made a scratchy start and soon after the kick off they conceded a scrum penalty inside their half. Trevor Nyakane was blown up at the set-piece and Abzhandadze gave his team the lead by adding the penalty.

Two minutes later, Pollard and Pieter-Steph du Toit combined brilliantly before the latter offloaded to Fassi just outside Georgia’s 22 and the flyer did well to beat a couple of defenders down the left-hand touchline before crossing for a well-taken try on his Test debut.

Pollard failed to convert and despite that score, South Africa failed to gain the ascendancy with Georgia holding the upper hand during the next 25 minutes. The Springboks were particularly ineffective in the rucks and mauls and battled to deal with the physicality of Georgia’s forwards in those facets of play.

Two ruck penalties in quick succession by the Boks presented Abzhandadze with opportunities off the kicking tee and he was successful on both occasions which meant Georgia were leading 9-5 by the 25th minute.

Despite their indifferent start, the hosts did not panic and they were the dominant side during the latter stages of the half. They spent the final 10 minutes camped inside their opponents’ half and in the 34th minute the game’s complexion changed when Beka Saghinadze was yellow carded after repeated infringements on defence from the Lelos.

Soon after, Mbonambi crossed off the back of a driving maul close to the visitors’ try-line and just before half-time Reinach gathered a chip kick from Fassi before outpacing the cover defence to score under the posts.

Pollard added the extras, which meant the home side were leading 19-9 at half-time and after the interval they continued where they left off by spending long periods inside Georgia’s half.

In the 54th minute, a strong scrum close the Lelos’ try-line allowed Smith to break off the back of the set-piece and the back-row had an easy run-in over the whitewash.

Five minutes later, Damian Willemse was stopped just short of the try-line, but scrum-half Jantjies caught Georgia’s defence by surprise when he barged over from close quarters at the ensuing ruck for his side’s fifth try.

South Africa were now in the ascendancy and had a bulk of the possession and territory during the rest of the match. In the 68th minute, Marx was also rewarded with a five-pointer, after a lineout drive inside Georgia’s 22, and with the result in the bag the Boks gave the ball plenty of air during the game’s closing stages.

There was no reward, however, but they will be happy with the result and their overall performance, especially during the second half.