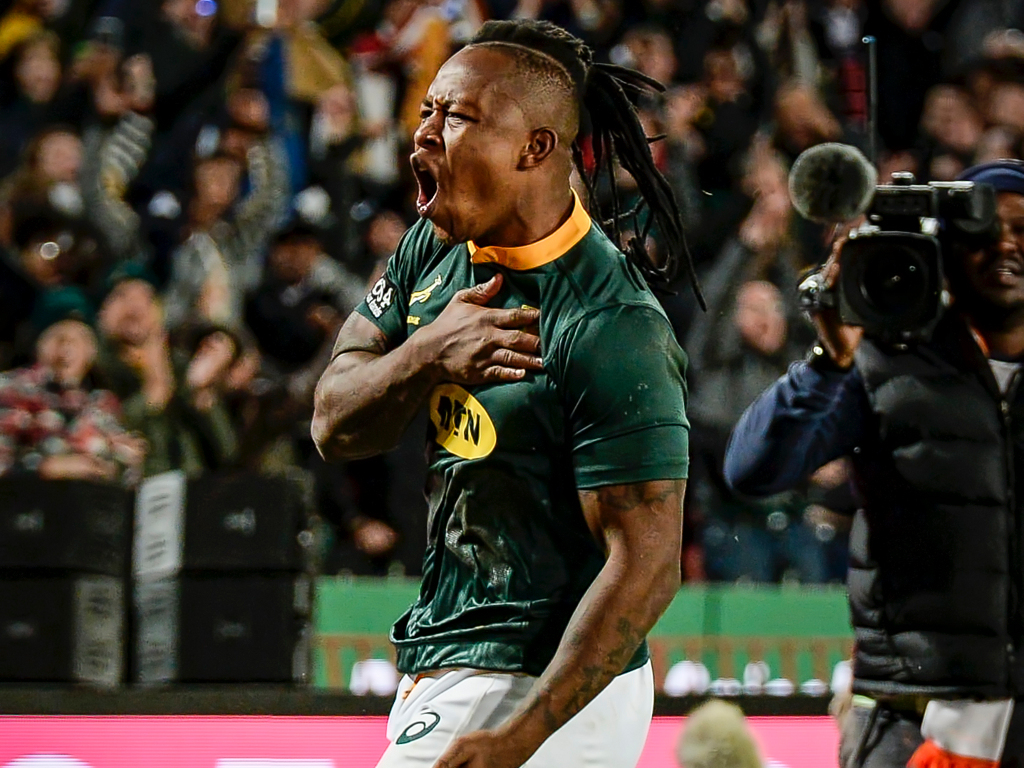 South Africa continued with their impressive recent form when they beat Argentina 24-18 in a World Cup warm-up match in Pretoria on Saturday.

In a tightly contested affair, momentum between the two sides ebbed and flowed throughout and the result was in the balance until the game’s closing stages. The home side did enough to clinch the result, however, after both sides scored two tries apiece.

Sbu Nkosi scored both five-pointers for the Springboks and their other points came via the boot of Elton Jantjies, who kicked four penalties and a conversion. For Argentina, Guido Petti and Pablo Matera scored tries while Joaquín Díaz Bonilla slotted a penalty and a conversion and Benjamin Urdapilleta also added a three-pointer off the kicking tee.

Although the teams showed a willingness to run the ball, the opening exchanges were characterised by several unforced errors from both sides and we had to wait until the 20th minute for the opening points – a penalty from Jantjies.

The match had a stop-start nature to it up to that point and there were several brutal collisions – none more so than Marcos Kremer’s hit on Marcell Coetzee in the 17th minute. Kremer’s no-arms challenge resulted in him being penalised but Coetzee was forced off the field for a HIA, which he failed, and he was replaced by Kwagga Smith.

The game came alive just after the half hour-mark when Jantjies found Warrick Gelant in space out wide with a well-timed skip pass. Gelant offloaded to Nkosi, who did well to beat two defenders before crossing for the opening try.

Jantjies’ conversion attempt struck an upright but the visitors drew level on the stroke of half-time when Petti intercepted a pass from Cobus Reinach close to the halfway line, before outpacing the cover defence to cross for a deserved try.

Bonilla succeeded with the conversion attempt which meant the visitors held a slender 10-8 lead at the break.

South Africa drew first blood after the restart and they did it in style courtesy of another superb try from Nkosi in the 48th minute. This, after he found himself in space down the right flank and he did brilliantly to beat three defenders before diving over the whitewash in spectacular fashion.

Jantjies added the extras which gave the home side a 15-10 lead but Urdapilleta reduced the deficit for the visitors when he added a penalty in the 57th minute.

Another Jantjies penalty on the hour-mark gave the Boks some breathing space but the Pumas struck back five minutes later when Matera crashed over from close quarters to draw his side level at 18-18.

Urdapilleta failed to convert before Jantjies gave South Africa the lead again via a penalty in the 69th minute.

The closing minutes were tense and the visitors thought they had regained the lead when Lucas Mensa rounded off a flowing move which started inside the Pumas’ half. His effort was disallowed, however, after television replays revealed that Jeronimo de la Fuente had obstructed Vincent Koch when he was trying to make a tackle on Urdapilleta in the build-up.

Despite that setback, Argentina continued to attack in a bid to secure victory, but the home side sealed their win when Jantjies slotted his fourth penalty in the 78th minute.