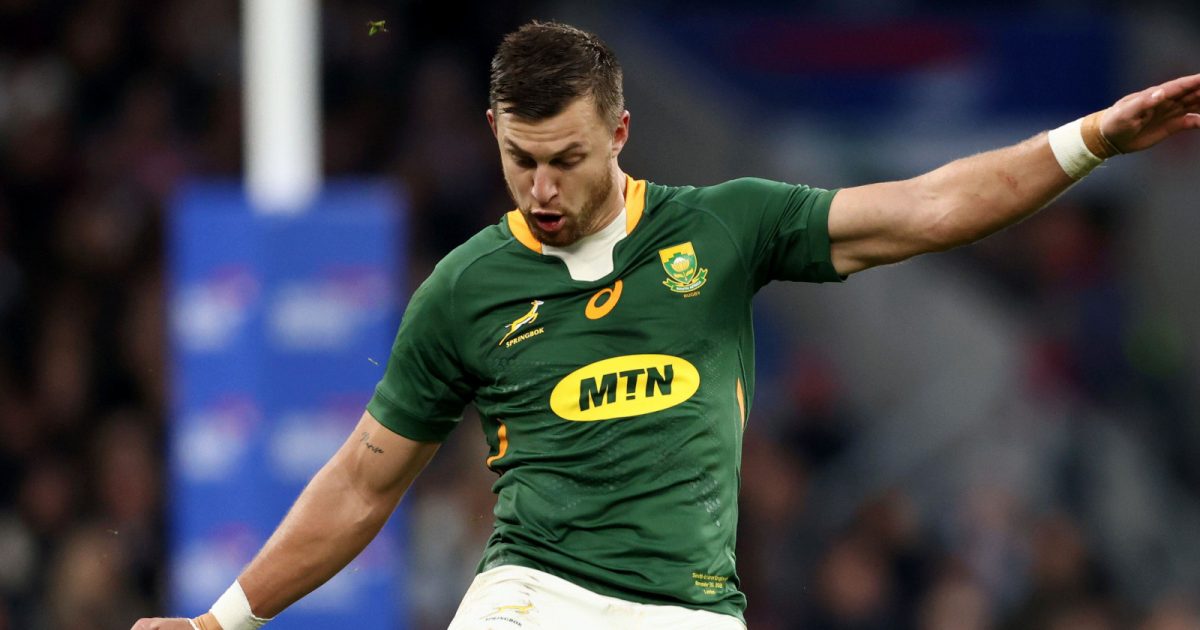 South Africa fly-half Handre Pollard admits they will be sticking to their normal game-plan in the Rugby Championship opener against New Zealand.

However, should chances arise in Saturday’s fixture the Springboks would grab them with both hands as they look to begin the competition with a win.

South Africa last defeated the All Blacks on home soil back in 2014 when Pollard contributed 19 points in an epic 27-25 triumph at Emirates Airline Park.

And Pollard can’t wait to lock horns with their rivals yet again as they prepare to face off in Nelspruit in their first Rugby Championship run-out of 2022.

“It’s always great to play against the All Blacks,” he told the Springboks’ website.

“We had a great week of preparation, so we have to make sure we pitch up for 80 minutes and that as individuals we all do our jobs and also as a team.”

On South Africa’s style of play, that often gets criticised by pundits, Pollard added: “We have a way of kicking and playing and we believe in that plan.

“We’ll stick to our plan this weekend and see how things go after 20 minutes and if we have to adapt, we will. If the opportunities are there, we will certainly try to take them.”

The Bok fly-half is set to go up against both Beauden Barrett and Richie Mo’unga on Saturday and knows more than anyone the threats both men possess.

“Richie Mo’unga and Beauden Barrett both have the X-factor, and they are experienced players,” said the experienced international.

“They are a threat with their footwork and with ball in hand, so we’ll try to contain them as much as we can and do our best as a team on the day as well.

“It’s going to be a massive battle. You don’t want to give the All Blacks broken field play, so the kicking game will be important, but it will come down to execution, and we’ll do the best we can to counter that.”

Meanwhile, flanker Pieter-Steph du Toit was equally excited by the prospect of facing New Zealand and also playing in front of their home fans once again.

“Playing against the All Blacks is always a good opportunity, and it is great to play here in Nelspruit,” he said.

“It’s a good opportunity to show our supporters where we are now after 2019 (when the Springboks won the Rugby World Cup). Obviously, time has moved on and we have to adapt, but we are excited about the challenge.

“We last won against the All Blacks at home in 2014, so it is an honour to play for the Boks against them, we really want to make our supporters proud.”

South Africa have been installed as favourites to win what is a huge opening game, with New Zealand under pressure after a series defeat to Ireland. However, Du Toit revealed their only focus is on themselves ahead of Saturday as they look to build on a strong week.

“For us, the main objective is to play the way we train,” he continued.

“The last time I played against them (at the Rugby World Cup in 2019), we lost, and it is a big focus point for us to make sure that it doesn’t happen again this time.”