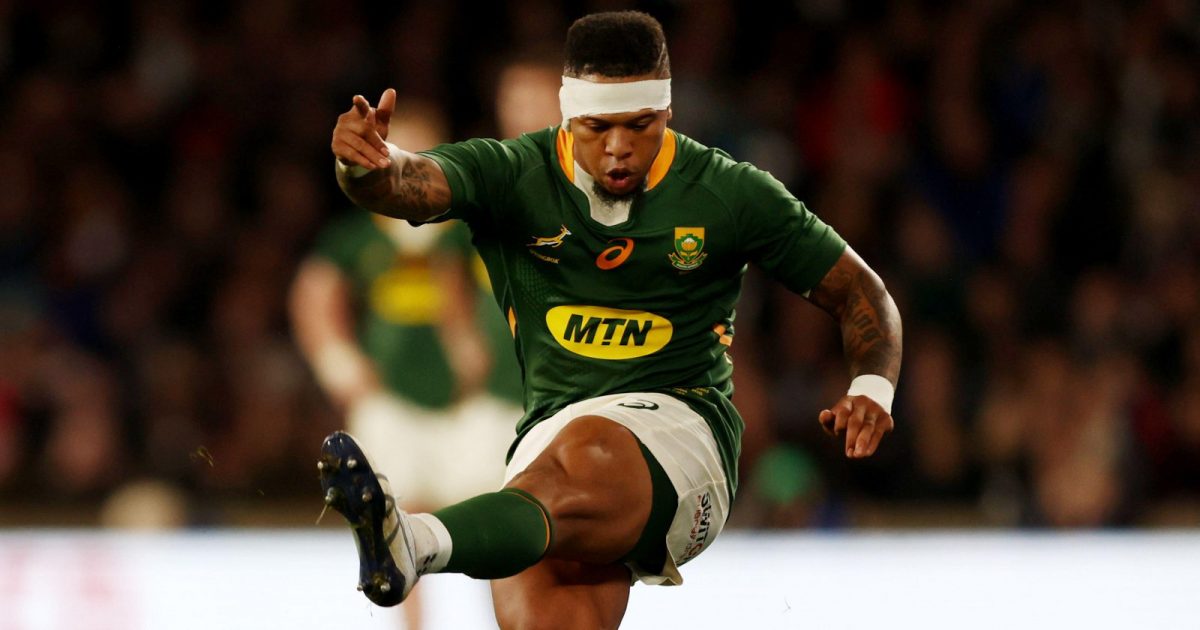 Springbok coach Jacques Nienaber has named his matchday squad for Saturday’s Test against Wales in Pretoria, with Elton Jantjies set to start at fly-half for the world champions.

Jantjies will form a half-back partnership with Faf de Klerk while Damian Willemse lines up at full-back in an experienced backline, which also features Makazole Mapimpi and Cheslin Kolbe on the wings and Lukhanyo Am and Damian de Allende as the centres.

Am named as Siya Kolisi’s deputy

In the forwards, Siya Kolisi continues as captain on the flank while Am has been appointed as the Boks‘ vice-captain for this fixture.

Kolisi is joined in the back-row by Franco Mostert and Jasper Wiese, who packs down at number eight. Eben Etzebeth and Lood de Jager form an experienced second-row combination while Bongi Mbonambi starts at hooker with Frans Malherbe and Ox Nché alongside him as the two props.

Meanwhile, Nienaber has named a strong replacements bench with Salmaan Moerat (lock) and Elrigh Louw (back-row) set to make their debuts in Pretoria.

“We have a talented group of players, and we believe the matchday squad we selected ticks the boxes in terms of what we would like to achieve in the opening Test against Wales,” said Nienaber.

“We have the added advantage of having several players that are quite versatile, so a guy like Damian Willemse for example can cover fly-half and centre in addition to full-back, while Kwagga covers each of the loose forward positions and can even slot in at wing with his Blitzbok experience.

“Franco also gives us options at loose forward and lock, so we look forward to seeing what this team can produce on Saturday.”

Nienaber is excited to offer Moerat and Louw the chance to make their Test debuts off the replacements bench after they impressed for their franchises during the recent United Rugby Championship.

“We have a fantastic crop of young players who have really been working hard at training and putting up their hands, and it is pleasing for us as coaches to give Salmaan and Elrigh this opportunity,” said the Springbok coach.

“Salmaan was with us on our tour to the UK last season, and despite being so young he brings a different sense of experience as a former Junior Springbok and SA Schools captain, while Elrigh also featured in a World Rugby U20 Championship and has been playing senior provincial rugby for a while.

“We have a plan for the season in terms of giving some of the young players a chance to show what they can do at international level, while at the same time taking stock of the seasoned campaigners and where they are in terms of their rugby.

“Unfortunately, with such a big squad there will always be a few unlucky players, but it is a fine balancing act to ensure we win Tests, build squad depth, and transform as a team in the way we play.

“We have a plan for the season in terms of giving some of the young players a chance to show what they can do at international level, while at the same time taking stock of the seasoned campaigners and where they are in terms of their rugby.

“That said, we are looking forward to seeing what Salmaan and Elrigh have to offer if they get the opportunity to take the field.”

Nienaber believes a tough challenge awaits against Wales, who will be highly motivated to improve on a disappointing Six Nations campaign.

“Wales have been training together for a few weeks now and we have no doubt that they will give everything against us on Saturday,” he said.

“They are an experienced squad, and they have top class players in their ranks – some of which represented the British &Irish Lions last year – so we are expecting a hard grind of a Test.

“They have physical forwards and backs that spark something from nothing, so we need to deliver a quality performance in order to get our season off to a strong start.”