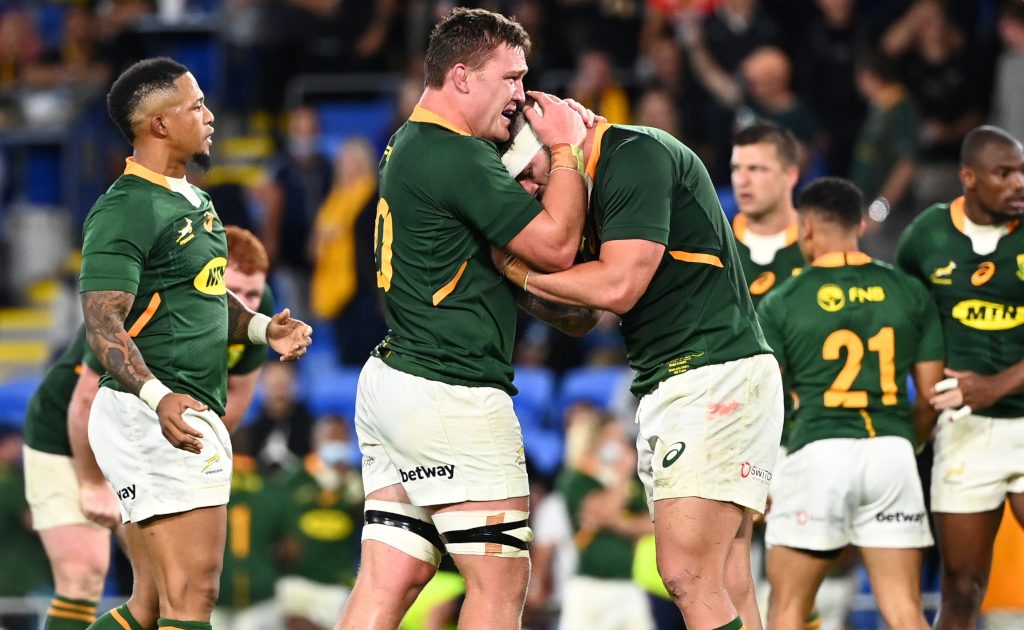 New Zealand’s two-week reign at the top of the World Rugby Men’s Rankings is over after they were beaten for the first time in this year’s Rugby Championship in Robina on Saturday.

In what was a brilliant advertisement for test rugby, reigning Rugby World Cup champions South Africa came from behind to win 31-29, thanks to fly-half Elton Jantjies’ penalty at the death.

Damian de Allende and Makazole Mapimpi scored tries for South Africa, while Handré Pollard added four penalties, and Jantjies landed a drop goal to go with a pair of penalties, including the winner with the final kick.

New Zealand opened up a 20-14 lead following tries from Sevu Reece, captain Ardie Savea and Brad Weber. But three Jordie Barrett penalties in the second half proved insufficient as their bid to go through the Rugby Championship with a perfect record came to an end.

South Africa’s victory – their first against the All Blacks when behind at half-time since 1998 – earned them 0.86 of a rating point and they now have a slender 0.16-point lead over their nearest challengers in the rankings.

Meanwhile, Australia’s 32-17 win over Argentina in the first match of the day at the Cbus Super Stadium came with a similar reward, and with the All Blacks losing, the gap between the trans-Tasman rivals is now down to 3.98 points.

Andrew Kellaway’s hat-trick was the standout feature of the win as the former U20 flyer continued his incredible scoring record in 2021. The 25-year-old made his debut in July and now has eight tries from nine appearances.

Both Rugby World Cup 2023 qualifiers in the Americas region ended with narrow first-leg wins for USA and Canada.

The Eagles withstood a fightback from Uruguay to win 19-16 and take a three-point advantage into this weekend’s return match in Montevideo.

Neither result led to any movement in the rankings but the Eagles are now just over one-and-a-half points better off than Uruguay in 16th place.

A 49-24 win for Bulgaria over Bosnia and Herzegovina in the opening match of the Rugby Europe Conference 2 South 2021/22 led to them climbing three places to a new high of 70th.