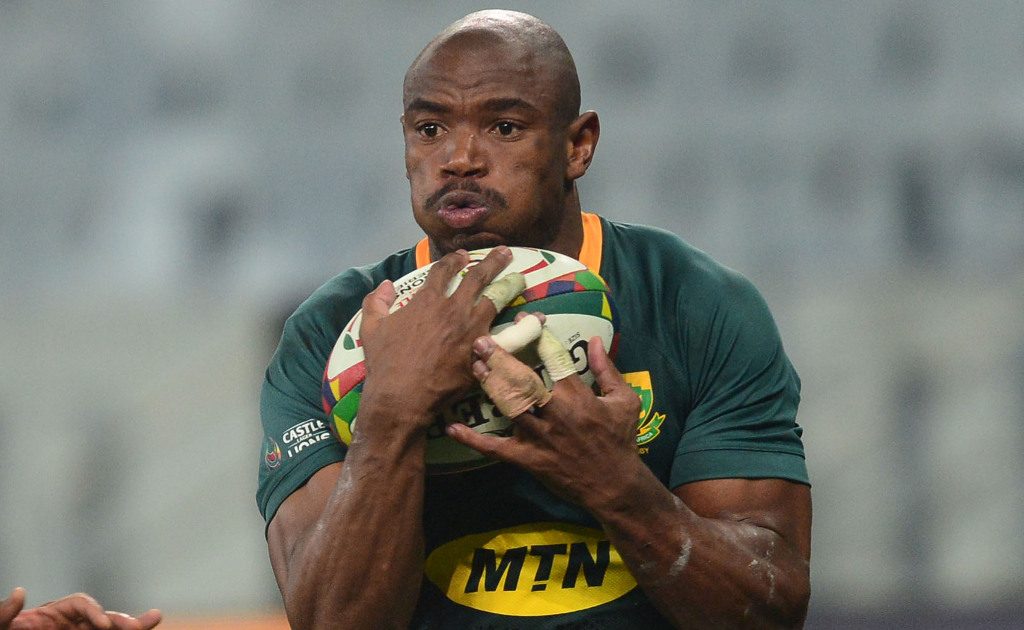 South Africa legend Bryan Habana, who shot to the top of the Boks’ all-time try-scorers list in the No 11 jersey, is ecstatic to see Makazole Mapimpi continue adding to the legacy that he held for just short of two decades.

Habana hung up his boots five years ago after scoring a record 67 tries in 124 Tests, whilst the Eastern Cape born Mapimpi’s 19 tries in 24 Tests has now matched Springbok legend Danie Gerber, who finished his career with the exact same record.

Making up for lost time

Having only made his debut at the age of 27, Mapimpi has since shown the work rate that earned him the late call-up after almost losing out due to lack of opportunities throughout his youth in Mdantsane township near East London.

Overcoming an arduous journey to the top of the sport only adds to the achievement, believes Habana.

“It is wonderful to see Makazole literally doing things that inspire so many,” Habana told IOL Sport. “I got to sit with him just over a year ago and heard his South African story, which speaks to most of the population — a very real, tangible story that impacts on how people see themselves and their country.

“One can’t be prouder of Makazole. Long may his try-scoring feats continue, hopefully he can keep contributing to the success of the Boks for some time to come, and I know he has going to break plenty of records.”

Mapimpi will go down in history as the first-ever try scorer for the Springboks in a World Cup final against England, who are this Saturday’s opponents at Twickenham, and Habana has tipped him to score again against Eddie Jones’ troops.

“I saw some very good things from the Boks against Scotland last week, to me they are getting close to the form they showed in that final two years ago,” he said. “At Murrayfield, I saw for the first time in a long time the backs using turnover possession to take the ball wide and they scored two tries that way. It was brilliant and if that trend continues I believe there will be some very pleased South African supporters around the world on Saturday night.”

With much of the focus on the size and strength of the Springbok forwards, Habana has credited the backline as underrated and perhaps lacking the credit they deserved.

“There was more to that World Cup final than the Bok forwards and the bomb squad,” he added. “Yes, the forwards laid a magnificent foundation, but the decision-making of the backs and their individual brilliance was the deciding factor — Lukhanyo Am, Mapimpi and Cheslin Kolbe were simply brilliant.

“Everybody knows what the DNA of the Boks is. Going into that final, we knew that a full set of forwards in the bomb squad coming on would make a huge difference, and it did, but the deciding factor in the final was that when opportunities presented themselves, the Boks were able to capitalise on them, and it was the backs that were phenomenal. I would love to see more of that this weekend.”

The 38-year-old feels there is a chance the Boks’ encounters against Wales and Scotland have gone a long way in shaking off some rust going into Saturday’s final tour match.

“People are saying that the Boks blew Scotland away in the second half, but they also played really well in the first 20 minutes when they created good pressure,” he said. “For 60 of the 80 minutes the Boks were in total control of that match and they will go into this England game with a lot of confidence but also very wary of the threat England pose.

“I can’t see the Boks varying too much. They know they can draw on the past experience of the 2019 World Cup when they physically imposed themselves, and the bomb squad mentality is alive and well through the likes of Malcolm Marx, Vincent Koch, Steven Kitshoff and Franco Mostert, and then you have Frans Steyn recapturing the exuberance of his youth. To have someone who can come off the bench and kick 60m goals is extremely useful tactically, and the envy of world rugby.”

With no South African representation in the World Rugby Player of the Year nominations, Siya Kolisi, Eben Etzebeth, and Mapimpi are among those looking to prove a point.