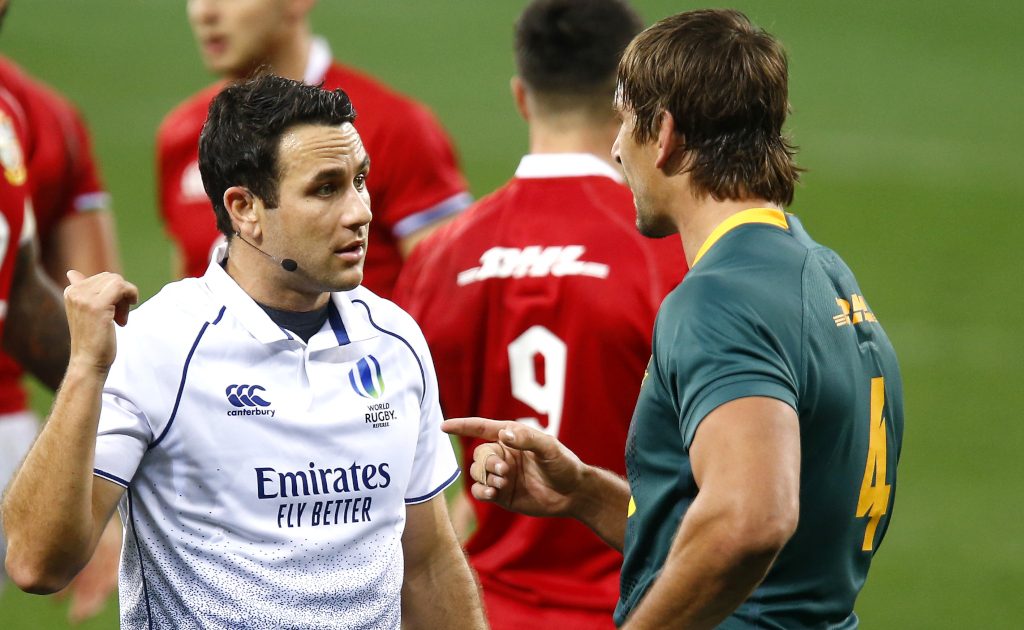 Take a look at South Africa’s player ratings following their 27-9 victory over he British and Irish Lions in Cape Town on Saturday.

15 Willie le Roux: A steadying hand amid an aerial onslaught from the Lions. 7/10

14 Cheslin Kolbe: Loose play for his yellow card, fortunate not to see red. Also unable to cut loose on the ball. 5

13 Lukhanyo Am: Delivered in style, with a neat try capping a bullish performance. 8

12 Damian de Allende: Every inch the physical presence the Boks required in midfield. 8

11 Makazole Mapimpi: Capped the move of the match with a fine finish to stun the Lions and put the Boks in control. 8

10 Handre Pollard: Took control of the game and nudged the hosts around the field in composed fashion. Accurate ‘up and unders’ put the heat on the Lions back three. 8

9 Faf de Klerk: Central to all things good about the Boks until he came off in the second period. 8

8 Jasper Wiese: Struggled to impose himself on the contest and could not offer a lineout solution. 6

5 Franco Mostert: Increasingly influential in the lineout as the match wore on. 8

4 Eben Etzebeth: A towering performance as the Boks took control in the tight exchanges. If Maro Itoje dominated last week then Etzebeth responded in kind in the second Test. 9

3 Frans Malherbe: Helped steady the scrum ship for the Boks. 7

2 Bongi Mbonambi: A solid effort especially at the set-piece. 7

The masterstroke to bring Lood de Jager on in the back-row solved the Springboks’ lineout problems and ultimately turned the game in their favour. 8