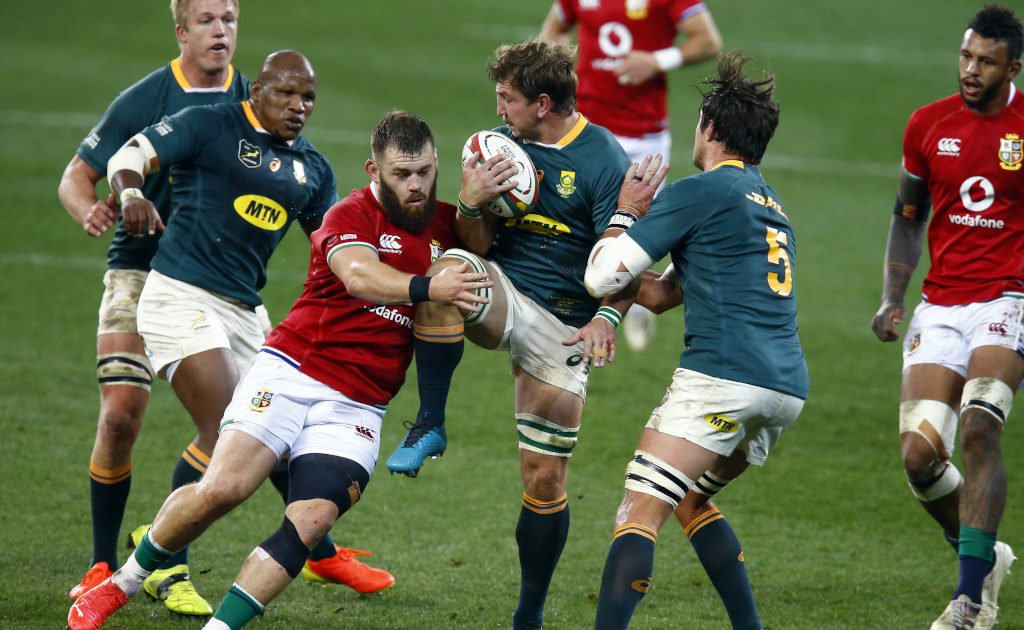 Take a look at South Africa’s player ratings following their 22-17 defeat to the British and Irish Lions in Cape Town on Saturday.

15 Willie le Roux: Threatened the Lions defence with some strong runs in the opening half and was safe under the high ball. Showed good pace when he crossed the whitewash early in the second half but that effort was disallowed as he was in front of the kicker. 7/10

14 Cheslin Kolbe: Was tested with some bombs but was brave under the high ball. We didn’t see his dazzling feet giving the tourists’ defence major issues though as when he received the ball, he was met by a wall of red defenders. 6

13 Lukhanyo Am: Had few attacking opportunities but made a statement of intent with a big hit on Elliot Daly early on. That set the tone for the rest of the first half as the Boks dominated the opening 40 minutes. Good decision to kick ahead in the build-up to that disallowed try from Le Roux but his biggest impact was on defence. 6

12 Damian de Allende: Had a quiet game by his standards and although he took the ball into contact with some strong carries, the Munsterman was kept in check by the Lions defence. Also went over for a disallowed try, in the second half, after a handling error from Kolbe in the build-up. 5

11 Makazole Mapimpi: Hardly saw the ball but when it did come his way, he showed his class with a couple of impressive runs. One of those saw him combining brilliantly with Pieter-Steph du Toit and when he was held up close to the try-line, he did well to offload to Faf de Klerk, who scored the Boks’ only try. 6

10 Handré Pollard: The Bok pivot had a great opening half in his 50th Test and dictated the pace of the game during that time. Caught the eye with some clever runs during that period and gave his team a deserving 12-3 lead at half-time with four penalties. Went off the boil after the interval and missed a couple of shots at goal. 6

9 Faf de Klerk: The Boks won the territorial game in the opening half and it was largely down to De Klerk, who impressed with the way he mixed things up behind his pack. Kept the Lions guessing with accurate box-kicks and clever offloads to his forwards. Scored a well-taken try but was less influential in the second half. 7

8 Kwagga Smith: Had a busy game but although he caught the eye with some darting runs, several of those were down blind alleys and he made little headway. Also conceded some penalties at the breakdown and when it was in goal-kicking range it resulted in points for the visitors. 5

7 Pieter-Steph du Toit: Came to the fore with his usual all-action style of play but like most of his team-mates, he went quieter as the game progressed. Continued to give his all and emptied the tank, especially on defence, but was kept in check on attack during the latter stages. 6

6 Siya Kolisi: The Springbok captain was in the thick of the action and although he gave his all, his efforts didn’t have the desired effect as he struggled to impose himself on his opponents. Made little impact at the breakdowns. 5

5 Franco Mostert: Like the rest of the world champions’ starting XV, Mostert had his tail up in the first half. The second half was a different story, however, and apart from winning his lineout balls and making tackles at close quarters, he had a quiet game and was eventually replaced by Lood de Jager. 5

4 Eben Etzebeth: The Bok enforcer was at the forefront of his side’s forward onslaught for the full 80 minutes. Made a nuisance of himself on the Lions throw-ins at the lineouts and won his own ball. Was his usual busy self in the tight exchanges with strong carries and big hits. 8

3 Trevor Nyakane: Nothing special to report. Did what was expected of him in the scrums and was a willing ball carrier but hardly made an impact in that department. Did well at the breakdown where he won a crucial turnover on the half-hour mark. Yanked off at half-time. 6

2 Bongi Mbonambi: Another one who was replaced midway through this Test but apart from his core duties he didn’t catch the eye. Conceded a penalty just before half-time after a high tackle on Alun Wyn Jones but Daly was off target with the resulting kick. 5

1 Ox Nché: Took the ball into contact on a few occasions in the first half and gained good ground. Also stood up well in the scrums although he conceded a penalty in the 35th minute at the set-piece but that didn’t prove too costly as Dan Biggar missed the shot at goal. 7

All the home side’s substitutions were made in the second half and if truth be told it did not have the desired effect. Their much vaunted World Cup-winning front-row of Steven Kitshoff, Malcolm Marx and Frans Malherbe came off second best to their Lions counterparts in the second half while Lood de Jager struggled to make an impact. 4