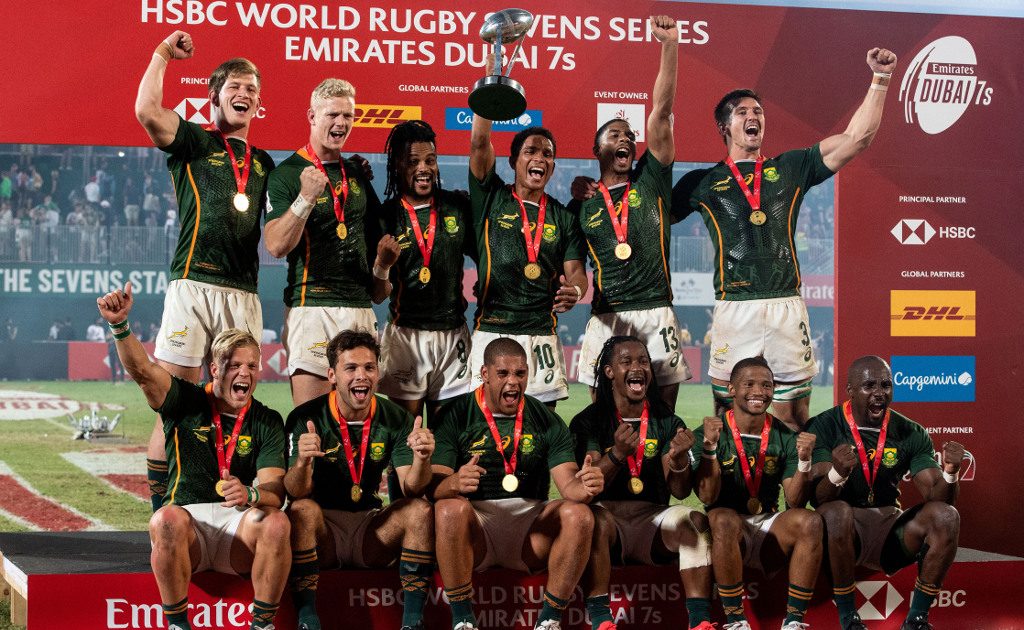 If the last two weeks are anything to go by, then the HSBC World Rugby Sevens Series 2022 is going to be unforgettable.

On Saturday, on day two of the second event at The Sevens Stadium, there were so many closely fought matches and it was fitting that, with crowds back in the ground, that the men’s and women’s Cup finals both proved electric.

In the men’s final, it was a tight as they come; South Africa were 7-5 down at half-time, but a crucial second period try from JC Pretorius gave them a 10-7 victory.

And Australia won the women’s event with a 15-5 triumph over Fiji in their final.

It means that both those countries have won the two events in Dubai in November and December and they head into 2022 as top contenders.

South Africa have shown that they are going to be the men’s team to beat on the circuit heading into 2022 after they defeated Australia 10-7 in the men’s final.

Their skipper Siviwe Soyizwapi got them off to the perfect start when he scored after one minute, the way that South Africa transition from defence into attack proving so impressive.

However, Nick Malouf’s men got back into things when Corey Toole showed brilliant pace down the left to level the scores up at 5-5. Dietrich Roache converted and Australia were 7-5 up at half-time.

This really was two top teams slugging it out against each other and with three minutes to go JC Pretorius secured a crucial turnover from Billy Meakes.

And 60 seconds later he was taking a leading role in attack, scoring an unconverted try to take South Africa 10-7 ahead.

Roache had one last change for Australia, but as he tried to offload down the left hand side the ball was knocked on.

The hooter then came and the Blitzboks continue to be unbeatable.

“Australia really took us the wire, it was a brilliant match,” Soyizwapi said after the match.

“Credit to my boys though, we battle so hard for each other and showed grit when we had to. It is such a great way to end 2021.”

HSBC player of the final Pretorius said: “We just gel so well as a group and never give up, that is the key.”

They've only gone and done it again🇿🇦🏆

Argentina made it two men’s bronze medals in two weeks as their two speedsters – Marcos Moneta and Luciano Gonzalez – led them to a 38-21 victory over France.

Gonzalez burst through to score the opening try of the game which was converted by Felipe Del Mestre.

Moneta then kicked through and scored out wide himself, but another young talent Nelson Epee then got France on the board and when William Iraguha converted it was 12-7.

And Moneta then used the kicking tactic again to score his second try, Del Mestre converting to make it 19-7 at half-time.

Gonzalez scored his second try a minute into the second half and it was 24-7 to Argentina.

They seemed on easy street, but then Moneta was yellow carded and tries for France from Rayan Rebbadj and Joachim Trouabal, both converted, made it 24-21.

However, Moneta had his say again with his third try and then skipper Santiago Alvarez finished things off.

In the men’s semi-finals, Australia stole the show with a superb showing of pace and power.

They swatted aside the challenge of Argentina 40-0 with Corey Toole, Henry Paterson, Josh Turner (2), Dietrich Roache and Billy Meakes all crossing for tries.

The second last four tie was much closer, France and South Africa being tied at 12-12 until a late try from JC Pretorius, converted by Ronald Brown, gave the latter a 19-12 triumph and put them into another final.

Great Britain defeated Kenya in the fifth place play-off to end up in that spot while USA were seventh. Fiji finished ninth after defeating Spain 31-7 in that play-off and Japan finished 11th.

France cause a shock in men’s quarter-finals

In the men’s Cup quarter-finals the biggest win came from France.

In the third last eight tie they played some great rugby to see off last week’s runners-up USA.

Nelson Epee was the man of the moment with three tries while Rayan Rebbadj also went over and the scores were all converted in a 28-12 triumph.

In the earlier quarter-finals, Ben Dowling, Corey Toole and Henry Paterson scored tries as Australia defeated Ireland 24-12 and two tries from Luciano Gonzalez led a rampant Argentina to a 33-12 win over Great Britain.

South Africa were pushed pretty hard by Kenya before they progressed from the fourth and final quarter-final.

Skipper Demi Hayes led her Australia squad to yet another gold medal after a pulsating final against the Fijiana.

Alysia Lefau-Fakaosilea thought she had opened the scoring, running a great line, but the Fiji defence got back and put her off as she knocked the ball over the try line.

Faith Nathan did give them the lead with an unconverted try three minutes before the break.

Nathan then set-up Madison Ashby for a crucial second unconverted try to make it 10-0 after seven minutes.

Fiji knew they needed a strong start to the second half – and they certainly got it.

Reapi Ulunisau scored a five pointer for them less than a minute after the interval and when Lefau-Fakaosilea was yellow carded for Australia with four minutes to go things had got very interesting.

However, it was Australia who managed to score next with six players, Lily Dick going over so close before the ball was recycled and Ashby went over for an unconverted effort.

That gave them a 15-5 win and Nathan was named the HSBC player of the final.

After the final, Hayes said: “We are stoked, we came to Dubai to win two tournaments and that is what we have done.

“We knew that Fiji are a physical side, so we tried to play with width and move them around the pitch and we battled really hard.

Nathan added: “I am so happy, this team have worked so hard over the last fortnight and we can build from here.”

Earlier in the day Australia had made sure of their place in the women’s final and topping Pool A with four wins from four by defeating Russia in a classic tie 26-17.

The Russians led 17-7 at the break thanks to tries from Marina Kukina, Alena Tiron and Daria Noritsina, but the Australians added to their first half try from Madison Ashby in a cracking second half showing.

Faith Nathan, Charlotte Caslick and Dominique du Toit went over and Sharni Williams was on point with the boot to give them the win.

A couple of ties earlier, Fiji had made sure they would top Pool B with four wins from four as they saw off France 17-12.

Alowesi Nakosi was the player leading the charge in that game with two tries.

It was a repeat of last week’s bronze medal match in the women’s competition as France took on Russia – and in the end the result was the same too.

Shannon Izar’s try opened the scoring for France and then a brilliant team move saw Camille Grassineau getting their second. Jade Ulutule converted both and it was 14-0.

A brilliant offload from Séraphine Okemba then put Ulutule in for a third converted try and the French were in control at half-time.

Things got worse for Russia when Daria Noritsina was yellow carded and Valentine Lothoz scored France’s fourth try soon after.

Russia did not give up and Noritsina scored a late try, but France came out on top 28-5 to give them yet another podium finish.

After the match, Okemba said: “I am very proud of the team. We were disappointed to lose the semi-final against Fiji, but we regrouped and played well in this game.

Elsewhere, USA edged out Spain 7-5 – Alena Olsen’s conversion proving crucial – in the fifth place play-off to make sure they finished in that spot.

Ireland defeated Canada 26-12 to end up in seventh while, after a tremendous tussle with Great Britain, Brazil finished ninth. In that play-off match Thalia Costa led the way with two tries.

The men’s and women’s circuits now take a Christmas break until they return in Malaga, Spain, from January 21 to 23.