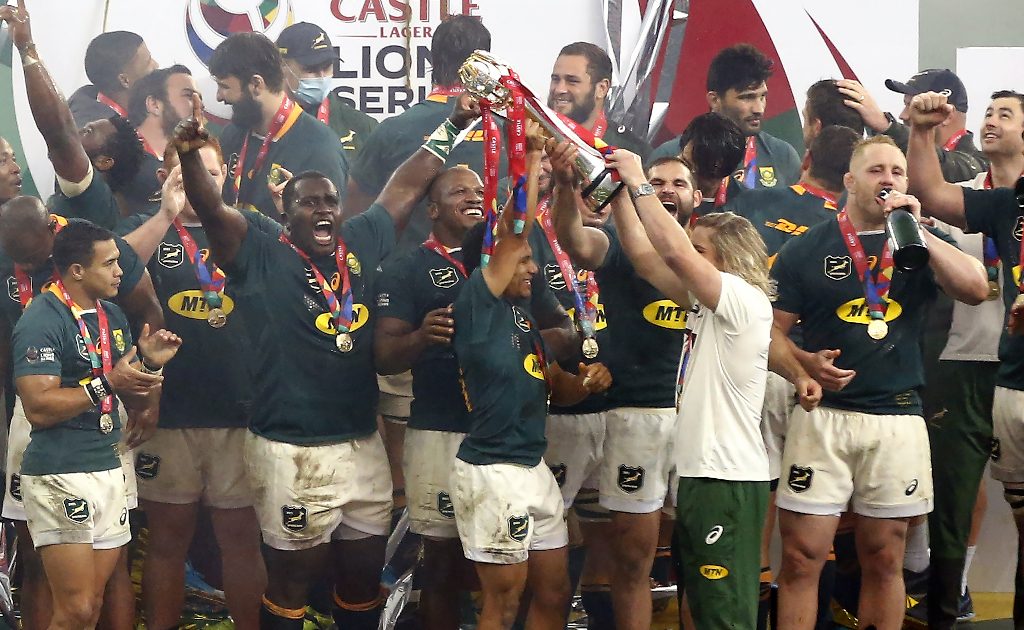 A 79th minute penalty from Morne Steyn saw South Africa to a 2-1 series triumph over the British & Irish Lions as they won 19-16 on Saturday.

After losing the opening Test, the world champions bounced back to claim the remaining matches as the Lions will head home licking their wounds.

For the Lions they crossed through Ken Owens while Finn Russell slotted a conversion and three penalty goals, but the touring outfit came up short.

Inspired by Russell who had replaced the injured Dan Biggar, the Lions produced their best rugby of the series in a first-half they lit up with off-loads, tempo and ambition.

The only concern was that Owens’ 19th-minute try as part of a 10-6 interval lead was a disappointing return given the time spent in the opposition 22 and so it proved in a tense third quarter dominated by the Springboks.

Kolbe struck with a brilliant finish to propel South Africa back in front and set-up a nerve-shredding climax to the series as Russell, Pollard and then Steyn took over from the kicking tee.

But trailing 16-13, the Lions rolled the dice by opting for touch instead of another three points and the gamble backfired when a scrum won after they had been held up over the line saw the Springboks win a penalty to relieve the pressure.

They did not make the same mistake twice, however, with Russell completing a long-range attempt to level the score with five minutes left, but there was still time for Steyn to strike.

In a desperate blow for Biggar, his departure soon after missing a shot at goal brought on Russell who made an immediate impact with the ball in hand once Pollard had sent a kick sailing between the uprights to draw first blood.

The Lions were gaining a crucial foothold at the scrum and when they squeezed the hosts once more, referee Mathieu Raynal awarded a penalty that Russell landed comfortably.

And Russell was at the heart of a Lions attack that swept them downfield, sharp lines and slipped passes doing the damage and forcing another kickable penalty, but this time Alun Wyn Jones opted for touch.

The gamble paid off as Owens was driven over from the line-out and with Russell on target with the conversion, the lead stretched to 10-3.

Liam Williams ignored an overlap that would have led to a certain score for Josh Adams as the Lions, guided by Russell, continued to make ground with the ball in hand before a second attempt at scoring a maul try ended with Raynal’s whistle.

Wyn Jones, the tourists’ most effective scrummaging loosehead, was clutching his shoulder in discomfort and South Africa forced a penalty at the set-piece that Pollard nailed.

The first-half ended with the Springboks furiously defending their line with Siya Kolisi coming to their rescue with a critical steal.

Wyn Jones finally departed with his injury soon after the interval and it became the Lions’ turn to weather a storm as South Africa pounded away without success, their disappointment compounded by a missed penalty by Pollard.

A high tackle by Russell on Kolbe was whistled but once more Pollard could not hit the target and with 55 minutes on the clock, the tourists finally escaped their half with a long kick from their mercurial fly-half.

But disaster struck almost immediately when a hoisted ball bounced off Jasper Wiese’s shoulder and fell to Lukhanyo Am, who fed Willie le Roux.

The former Wasps full-back did his job perfectly as he drew his man and fed Kolbe who twisted and turned through despairing tackles by Williams and Luke Cowan-Dickie to score.

Russell punished an infringement by Wiese to level the score but Steyn replaced Pollard and his first act was to land a penalty.

The Lions were held up over the line and could not capitalise on a five-metre scrum, but they were back on the front foot through a rampaging break by Robbie Henshaw.

Russell then found the posts but Steyn had the final say as he returned to haunt the Lions.