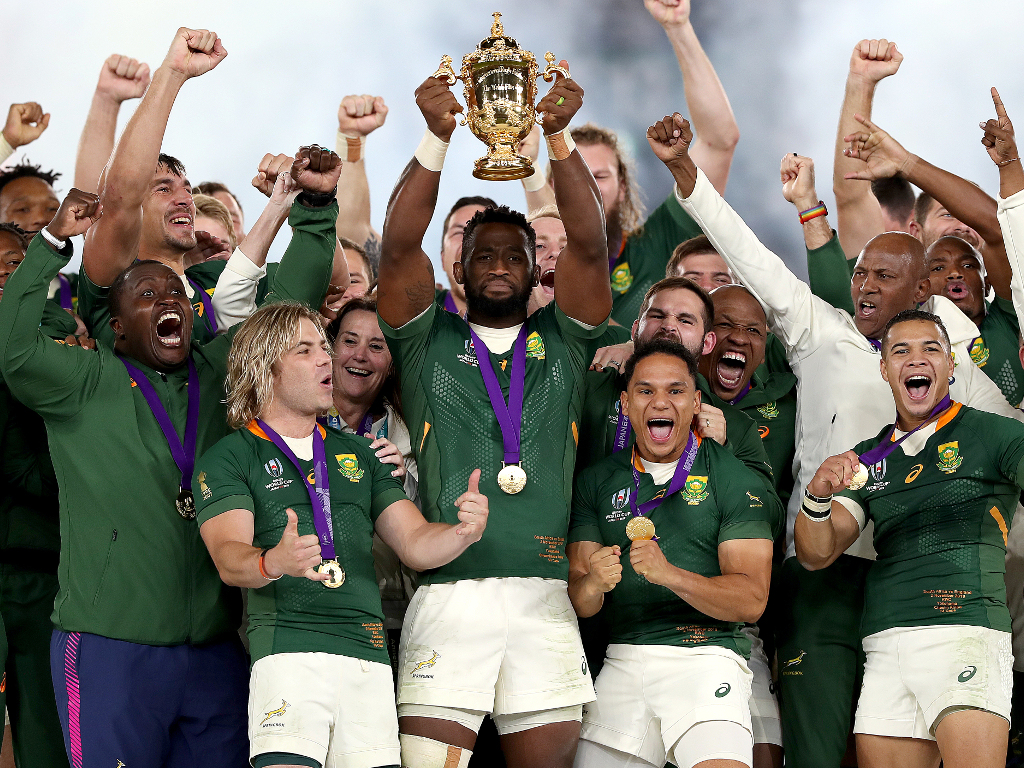 South Africa were crowned world champions for a third time courtesy of a 32-12 victory over England in the Rugby World Cup Final in Tokyo on Saturday.

In an epic and attritional contest, South Africa’s power game proved the difference between the sides and their forwards deserve special praise as they laid the platform for this win.

Handré Pollard was the Springboks’ hero as he finished with a 22-point haul, after kicking six penalties and two conversions, while Makazole Mapimpi and Cheslin Kolbe crossed for tries.

All England’s points came via the boot of Owen Farrell, who slotted four penalties.

The win is an historic one as it means the Boks become the first side to lift the Webb Ellis trophy despite losing a match during the tournament. They are also the first team to win the World Cup and Rugby Championship in the same year.

South Africa had an early opportunity to open the scoring when Courtney Lawes was penalised at a ruck shortly after the kick off but Pollard’s shot at goal was off target.

England were then dealt a heavy blow when Kyle Sinckler was forced off the field for a HIA – which he failed – after an accidental clash with Maro Itoje while trying to tackle Mapimpi.

South Africa continued to hold the upper hand during the early stages and Pollard made up for his earlier miss when he opened the scoring off the kicking tee in the 10th minute, after Farrell held onto the ball on the ground deep inside his 22.

The Boks were winning the collisions but midway through the half they suffered a double setback when Bongi Mbonambi and Lood de Jager were forced off the field with head and shoulder injuries respectively.

England were soaking up the pressure and restored parity in the 23rd minute when Farrell added a penalty after Kolbe infringed at a breakdown.

That did not deter the their opponents, however, who held an edge in the tight exchanges and shortly afterwards a dominant scrum saw England conceding a penalty which Pollard converted.

Momentum continued to ebb and flow and during the latter stages of the half and England strung several phases together inside South Africa’s 22 but they were met by a wall of green defenders. Inevitably, one of the Bok tacklers – Tendai Mtawarira – infringed while defending his line and Farrell drew his side level by slotting the resulting penalty.

South Africa regained the initiative soon after when they were awarded another breakdown penalty in the 39th minute and, once again, Pollard held his nerve to succeed with his third shot at goal.

And on the stroke of half-time, England’s pack succumbed under great pressure at a scrum and Pollard slotted the ensuing penalty which meant his side were leading 12-6 at the interval.

The Boks came out firing after the break and once again their scrum gave them a significant edge. Shortly after the restart, Steven Kitshoff and Vincent Koch replaced Mtawarira and Frans Malherbe and the new props made their presence felt at a set-piece, just inside England’s half. Pollard showed his class by landing the long-range kick at goal.

England seemed shell-shocked but, to their credit, they did not panic and in the 51st minute they also won a scrum penalty which Farrell duly converted to reduce the deficit to six points again.

Three minutes later Farrell had a chance to make it a three-point game – when Pollard was penalised after holding onto the ball on the ground – but his goal-kick was off target.

That proved costly as Pollard soon slotted his sixth penalty, after Elliot Daly strayed offside on defence, but from the restart Siya Kolisi went off his feet at a ruck and Farrell made it 18-12 when he succeeded with his fourth three-pointer off the kicking tee.

In the 63rd minute, Pollard lined up a penalty from five metres inside his half but his effort was a poor one which did not have the distance or the direction.

The match needed a moment of brilliance and that came in the 66th when Mapimpi delivered a beautifully weighted chip kick which Lukhanyo Am gathered. He then offloaded to Mapimpi, who crossed for a deserved try.

Pollard added the extras which gave his side a healthy 25-12 lead and England would then up the ante on attack during the game’s closing stages. That proved risky and in the 74th minute the Boks won a crucial turnover. The ball was shifted wide to Kolbe, who stepped past Farrell inside England’s 22 before crossing for the match-sealing try.