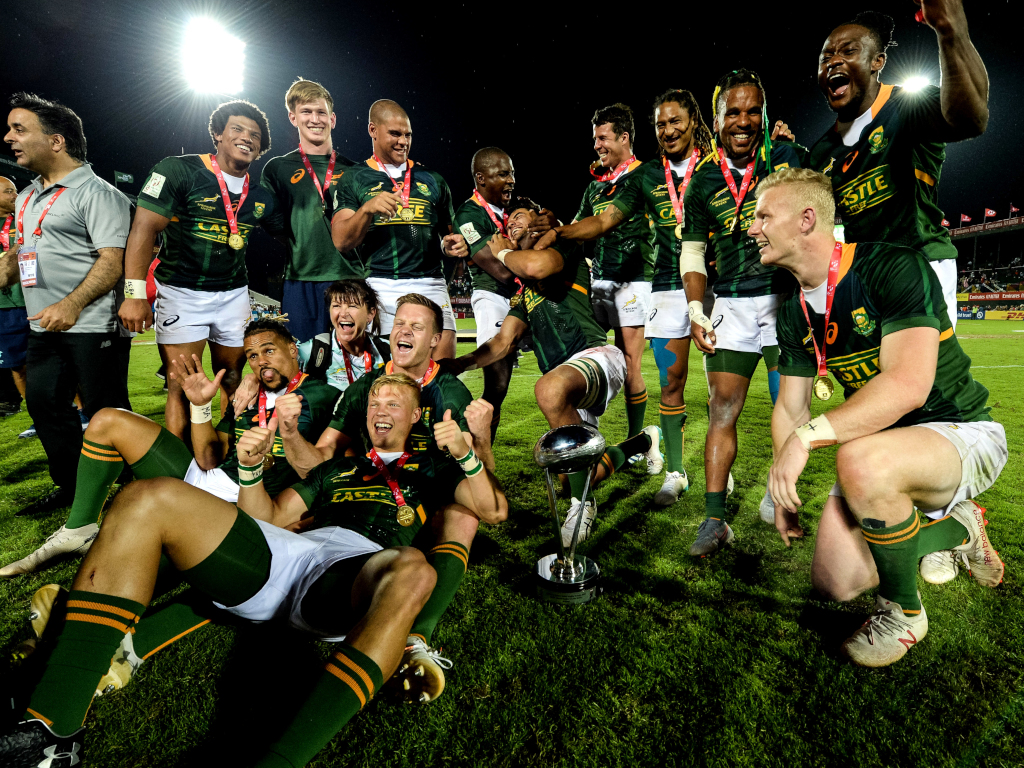 South Africa ended a run of three defeats against New Zealand to win a seventh Dubai Rugby Sevens title at the Sevens Stadium on Saturday.

The first Cup final meeting between the two nations since South Africa triumphed 24-12 in the desert back in 2017, looked to be heading for a scoreless first half after Chris Dry knocked on in the act of scoring and then Zain Davids was held up over the line.

However, from the resulting scrum, and with only two seconds showing on the clock, South Africa swung the ball quickly left to create just enough space for captain Siviwe Soyizwapi to go over in the corner to earn some reward for the long spells they had spent in the All Blacks Sevens 22.

South Africa’s kick-off at the start of the second half was booted back with interest by Tim Mikkelson – playing in his 41st Cup final on the series – but Rosko Specman kicked and chased, forcing Kurt Baker to take the ball back over his line. From the resulting scrum, the Blitzboks kept possession and eventually worked Dry over on the left for a 10-0 lead.

The score remained that way until the final minute when Seabeloa Senatla scooped up the ball and sprinted away to wrap up a first victory over the All Blacks Sevens for almost a year.

CHAMPIONS! @Blitzboks win the #Dubai7s, beating New Zealand 15-0, to get their series off to a flying start! #HSBC7s pic.twitter.com/cE9U1Zmdvh

HSBC Player of the Final Specman, like Senatla playing in his first series event since Cape Town last December, said: “The crowd in Dubai is amazing, they always come with the numbers whether it’s Fiji, New Zealand or South Africa and I’d like to say thank you to everyone – I hope we have made you guys proud this weekend.”

South Africa lead the standings after the first of 10 events in a season that culminates in the Tokyo 2020 Olympic Games in Japan with 22 points, ahead of New Zealand and bronze medallists England. Will Muir proved to be England’s ‘super sub’ in the bronze final against Samoa, scoring a mere 14 seconds after coming onto the pitch to secure a 19-14 win in a entertaining match.

Fiji finished ninth – their lowest ever placing in Dubai in series history – after scoring six tries in a 40-17 defeat of Canada, to give them eight points, 14 fewer than champions South Africa. Spain edged new core team Ireland for 11th place with Kenya finishing 13th and Wales 15th.

The teams now move onto Cape Town for round two of the HSBC World Rugby Sevens Series 2020 next weekend, where Fiji are the defending champions after beating USA in the final last year.