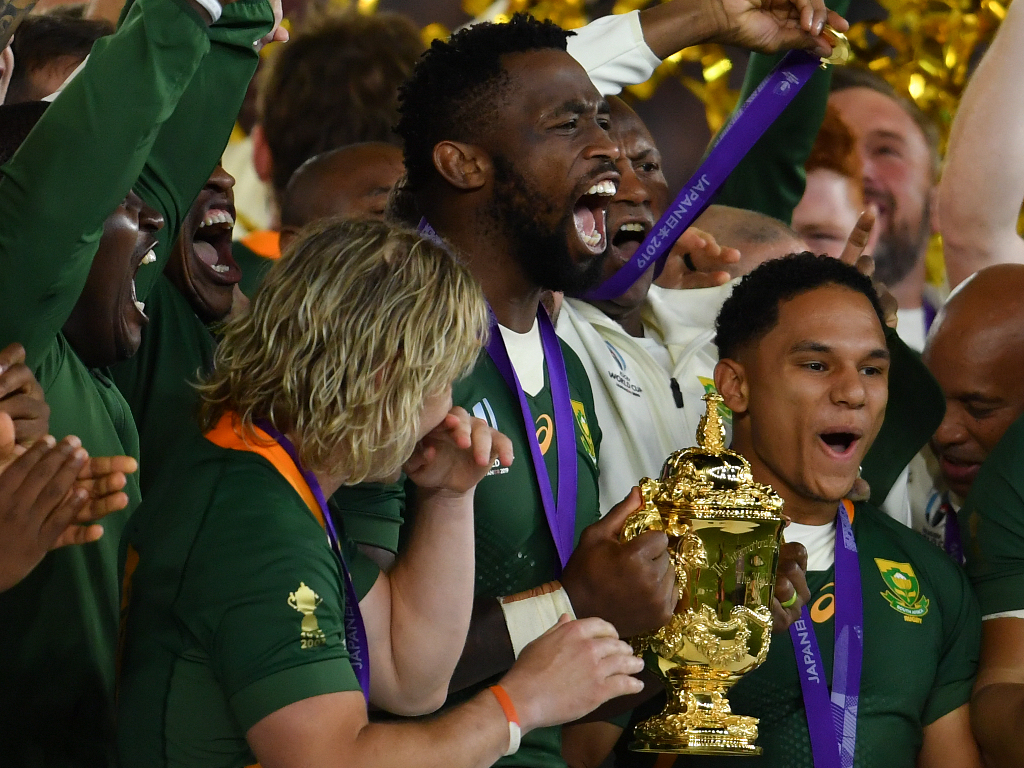 South Africa’s captain, Siya Kolisi, hailed the Springboks faithful after his team arrived in Johannesburg as world champions on Tuesday.

“Humbled and overawed” was the reaction from Kolisi when the Springboks were welcomed back to South Africa from Japan by thousands of supporters, government officials and media at the OR Tambo International Airport.

A big chunk of the 31 players that did duty at the Rugby World Cup in the last two months arrived on three different flights after close to 40 hours of travel time from Tokyo.

Groups of Springbok players and management flew via Sydney and Abu Dhabi. More squad members are arriving on Wednesday.

The first groups to arrive – which included World Rugby Player of the Year Pieter-Steph du Toit, Rugby World Cup Final try-scorers Cheslin Kolbe and Makazole Mapimpi, as well as the final’s man of the match, Duane Vermeulen, were greeted by massive cheers from thousands of green and gold clad supporters as pandemonium broke out when the Boks exited into the International Arrivals hall.

Kolisi and South Africa’s director of rugby, Rassie Erasmus – whose flight via Sydney was delayed by a few hours – landed after 19:00 local time (17:00GMT), with supporters patiently waiting for their arrival, and the arrivals hall erupting with thunderous cheers when the Bok captain walked through the doors carrying the Webb Ellis Cup.

Absolutely incredible reception in Johannesburg for the team's return home last night – it's going to be fun week 🏆#ChampionsTogether pic.twitter.com/e8AkUxYyR2

They thanked the supporters for coming out in their droves to welcome their heroes back.

“In Japan, we got a glimpse of the support back home, but this reception is something else – we can’t begin to thank everyone for backing us throughout this journey,” said Kolisi.

“We did this for all South Africans – ordinary people who work tirelessly all day long to care for their families and friends and ultimately make our wonderful country an even better place.

“Winning the World Cup on foreign soil was very special – and arriving home to this wonderful support is the cherry on top. We are tired but grateful, humbled and overawed – thank you!”

Erasmus said the Boks can’t wait to embark on their trophy tour, which kicks off in Johannesburg on Thursday. They will also visit Durban, East London, Port Elizabeth and Cape Town on a whirlwind tour stretching over five days.

“We brought the Webb Ellis Cup home for all South Africans and we really wish we could go everywhere to thank our supporters, but unfortunately logistics and time constraints doesn’t allow for that to happen this time,” he said.

“I would like to agree with Siya – the support here at the airport today made all the hard work and sacrifices over the last two months worth it. Thank you to everyone who came out to greet us tonight.”

The trophy tour kicks off in Johannesburg on Thursday, November 7, with the Bok bus travelling through parts of Pretoria, Johannesburg and Soweto.