Home Scotland Dylan Richardson has the taste for more with Scotland 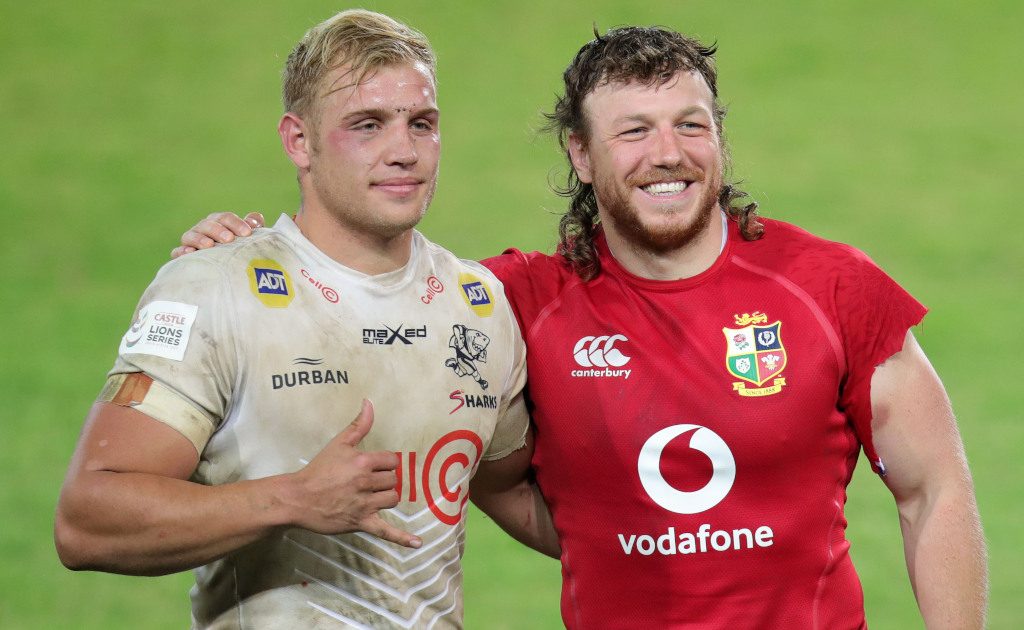 As a new year lies ahead, with a blank rugby canvas, there is no doubt that Sharks forward Dylan Richardson is a player worth keeping a close eye on in 2022.

Towards the end of last year, the talented youngster enjoyed what he describes as an “addictive” Test debut for Scotland, having qualified on ancestral grounds (his father Neil was born in Edinburgh).

At international level he is now officially ‘Scottish’, but on the domestic scene he will continue to ply his trade with the Durban-based Sharks – a team he remains committed to under a new contract that runs through to 2024.

By remaining at the Sharks, Richardson has willingly taken on what is sure to be an intriguing challenge for regular game time.

Two Boks to compete with

Indeed, as the Sharks – with the backing of new big-money investors – have continued to strengthen their squad for the United Rugby Championship, they have welcomed two high-profile Springbok recruits to Kings Park in the past year: flanker Siya Kolisi and hooker Bongi Mbonambi.

For Richardson, an openside flanker who can also play hooker, it just so happens that the Rugby World Cup-winning duo have added depth and competition to the exact starting positions he would be vying for.

“I won’t lie to you, that’s something I am of course aware of, and it is a tough pill for any player to swallow,” Richardson openly acknowledges with a wry chuckle when speaking to Planet Rugby. “But I am also happy about the competition because there’s a lot I can learn from both players. I’m just absorbing as much as I can, and being in that sort of company makes you want to raise your whole game to another level.

“Obviously there will come a time – it’s probably coming soon – where we will have to compete for a (starting) position, but at the end of the day, that’s rugby. So from that perspective, it is challenging, but the bigger picture is that it’s awesome that the Sharks are putting together a really, really strong team. There’s a good environment at the Sharks and I’m especially excited to see what the side can bring to the URC competition. I think we’re going to be a very different team in 2022 from what everyone’s seen before.”

The Sharks are set to return to URC action with a clash against the Lions on January 22, although it remains to be seen if Richardson will instead be back with the Scotland squad ahead of the upcoming Six Nations.

In last year’s tournament, Scotland managed to win three out of five games, and will be looking to make a competitive start to a new campaign as they open the 2022 season with a challenging encounter against England at Murrayfield on February 5.

Richardson, who spent much of the festive season completing injury rehabilitation from a fibula stress fracture, described his first experience with Scotland as “simply world-class”.

“That was the kind of level that I expected, but even so, I was blown away by how professional things were. They definitely take it over and above. The people are awesome and the whole Scotland environment is so conducive to success. Everything you could possibly need is provided on a platter, and all you have to do is just perform. I think that’s what was ultimately the best thing about it, you just go there and put in the work, and everything else is offered to you.”

Although Richardson is viewed as a utility forward by Scotland, the first indications have been that he will primarily feature as a flanker, which is the position where he hopes to increasingly specialise this year.

“I know that a lot of people – particularly in South Africa – do want me to play hooker, and I’m not writing off that alternative at all, but I do like the idea of playing flank. It’s the position that I love and really have a passion for. I don’t really have to think about it – playing flank just comes naturally to me. There’s a benefit to being able to play two positions, but for me now, while I’m trying to get to the peak of my career, I think flank is the perfect position for me.”

And as Richardson looks forward to his 23rd birthday on January 15, there is an enduring sense that this could be a big year for the prodigiously talented youngster. However, it’s also abundantly clear that he is not going to take anything for granted.

“Yeah, 2021 was a challenging year, but also a great learning curve. At the beginning of the year I tore my ankle ligaments, and went from playing really well to basically going back to the bottom again. Then there were challenges with Covid, and it just proved again that you have to be prepared for anything. You can be playing your best rugby, get an injury, and then have to start again. Or Covid hits and you’re suddenly not playing again.

“So for me, in 2022, it’s just about preparation: at the end of the day all we can do at this time is to be prepared for anything, and to keep focused on the things you can control.”