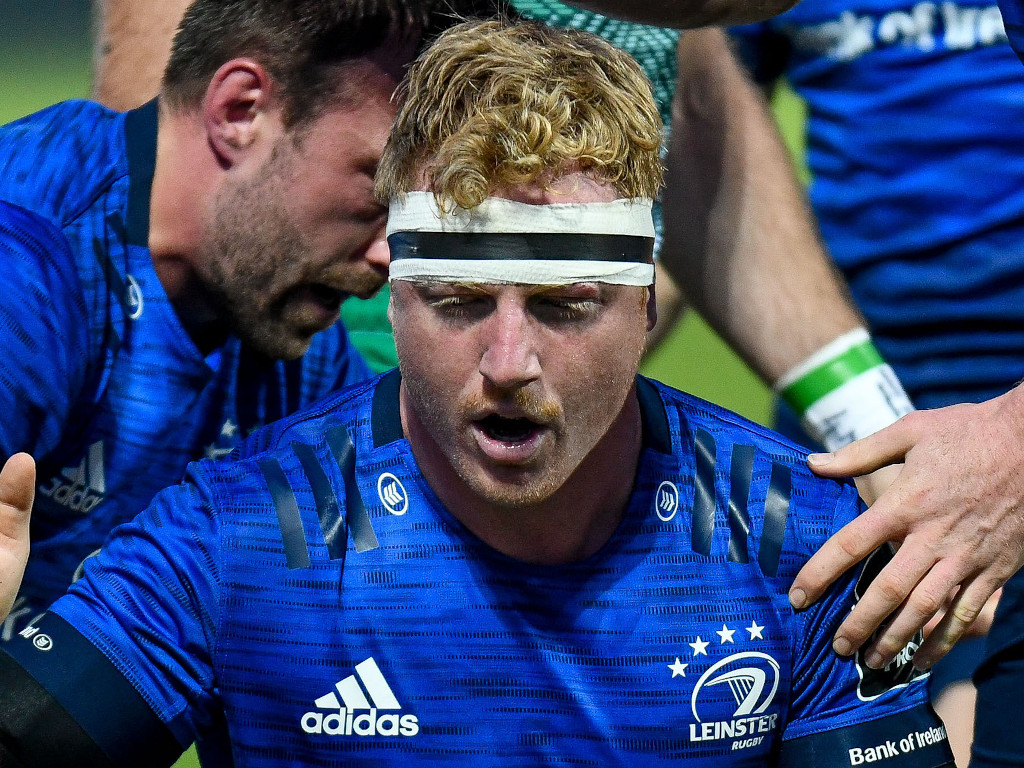 Scott Penny snapped up two final-quarter tries during high-flying Leinster’s 40-5 PRO14 victory over Cardiff Blues at the RDS on Sunday.

Dave Kearney’s try after just 36 seconds – the Irish province’s second-fastest in PRO14 history – put them on course for a 19-5 half-time lead.

Jimmy O’Brien and Aled Summerhill swapped tries towards the end of the first quarter, with James Tracy’s maul score coming just before the interval.

The visitors fell behind inside the opening minute, Leinster centre Ciaran Frawley ghosting past Ben Thomas to send Kearney over near the left corner.

Byrne converted and then added the extras to a blistering 14th-minute score from full-back O’Brien, who touched down from his own chip kick which Tovey had failed to deal with.

However, Cardiff replied from their first serious attack, whipping the ball wide from a 17th-minute maul for winger Summerhill to slid over in the far corner.

It remained 14-5 despite some speedy sniping from Luke McGrath and Blues centre Thomas, who was starting to catch the eye in attack.

Josh Turnbull and company made the breakdown a real scrap and Byrne then pulled a penalty wide. But, with a clever kick from O’Brien forcing a late lineout, the Leinster pack successfully drove hooker Tracy over.

Breaks from Silvester and Summerhill went unrewarded early in the second period, and a determined Cardiff rearguard held Leinster up twice before Rhys Ruddock was pinged for a double movement on the try-line.

Nonetheless, with their bench growing in influence, the home side went up a gear to maintain their bonus point-winning form.

Upping the tempo off a Ryan Baird lineout steal, a series of pick-and-drives ended with Penny reaching over in the 66th minute. He did likewise five minutes later, aided by a latch from Baird.

It was a cruel finish for the battling Blues, who watched Byrne dink a neat kick through for Silvester to ground beside the posts. The fly-half tagged on his fifth conversion.

They were made to battle but the unbeaten run goes on…just! 👊

In the late game, Ulster secured their seventh straight PRO14 win with a 26-24 victory over Scarlets but they were made to fight all the way in an entertaining game which brought try bonuses for both sides.

It was Ulster’s fifth bonus-point win from their seven games played and the 1,000 supporters allowed into the Kingspan Stadium for the first time this season were treated to a closely-fought contest which the Welsh region could have won had they been more accurate.

But Scarlets not only secured their own try bonus-point, following Phil Price’s late effort, but also left with a losing bonus-point as well.

Ulster – who led 19-7 at the break – scored tries from Rob Lyttle, Stewart Moore and Sean Reidy before Kieran Treadwell bagged the bonus point in the second half.

However, they invited Scarlets back into the contest after having two players sent to the bin, Treadwell in the first half and Matt Faddes in the second.

For Scarlets, Dan Jones was wide with two early penalties but Paul Asquith scored a first-half try, converted by Angus O’Brien, before Ryan Conbeer and Steff Evans crossed the line ahead of Evans’ 76th-minute drive which was also converted by O’Brien.

Ulster – who had already rejigged their backline after Luke Marshall’s early injury – got off the mark after just six minutes when John Cooney launched a counter-attack and Faddes linked with Lyttle whose run down the left wing saw him lose the last line of defence and make it over the line.

Cooney was just wide with the conversion, as was Dan Jones with his first shot at goal which looked like a miscue and came after Ulster were penalised at a scrum.

Jones then wastefully missed again with a kickable 12th-minute penalty after Evans had made a break only for Ulster to make a high tackle.

Four minutes later and lock Treadwell was shown yellow by referee Andrea Piardi after making contact around the neck of Javan Sebastian.

Scarlets immediately made their numerical advantage count when centre Asquith found space to get over the line and O’Brien – taking over the kicking duties from Jones – made no mistake and put the visitors in front.

But the Welsh region did not score again with Treadwell away and though they stayed on the front foot their confidence was badly rattled by Moore’s interception of Dane Blacker’s pass to Asquith as the Ulster centre ran in from over 80 metres to dot down under the posts.

Cooney converted to put Ulster 12-7 in front and he converted again just on the half-time whistle after Reidy barrelled over from close range for Ulster’s third try.

From the restart, Scarlets had their second try when Steff Hughes’ superbly-weighted cross-kick put Conbeer over in the right corner as it dropped in behind Lyttle. O’Brien, though, could not add the difficult conversion.

Then Faddes was yellow-carded for a high tackle on Conbeer, forcing Ulster to play another 10 minutes down to 14 men.

Scarlets struck for try number three in the 55th minute when Evans was put clear down the left off a scrum. O’Brien’s difficult conversion came back off the posts.

Then a series of unforced errors allowed Ulster an opportunity in the Scarlets’ 22 and Treadwell bagged the bonus-point score from a close-in drive with the fourth touchdown converted by Bill Johnston.

The Welsh, though, claimed a try bonus in the 77th minute off replacement Price, with O’Brien again converting.

FULL-TIME| We win 47-12 after a brilliant, seven try performance at The Stadio Sergio Lanfranchi.

Earlier, Connacht bounced back from last week’s narrow defeat by Scarlets with a comfortable 47-12 win at Zebre.

Tommaso Boni broke through to give the Italians an early lead but two Jack Carty penalties cut the deficit before Sean O’Brien drove over.

Wootton’s double put Connacht 23-7 up at the interval before Sam Arnold and Daly stretched the advantage to 26 points.

Connacht were reduced to 14 men when Abraham Papali’i was shown a red card for a head-high challenge on Boni, and Marco Manfredi promptly scored Zebre’s second try.

But a penalty try put the visitors 40-12 up and Daly chased down Conor Fitzgerald’s kick through to complete the scoring.

Elsewhere, the Ospreys overturned a 15-point deficit to record a 24-22 PRO14 victory over Benetton at St Helen’s in Swansea.

Tries from Ifan Phillips, Shaun Venter and Dewi Lake along with nine points from the boot of Stephen Myler was enough to secure a dramatic victory for Toby Booth’s side.

Hame Faiva scored a hat-trick for Benetton with Ian Keatley adding seven points from the kicking tee as they fell just short.