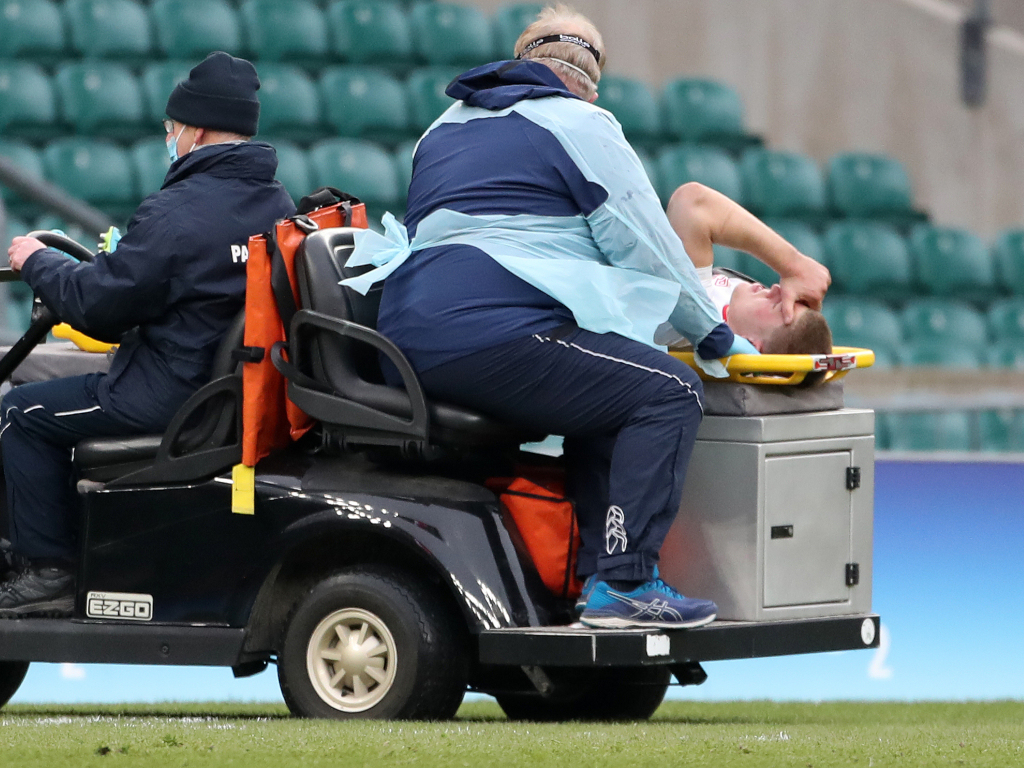 England kick-started their 2021 Six Nations campaign with a dominant 41-18 triumph over Italy but it came at a cost as one of the try-scorers, Jack Willis, was stretchered off with a serious-looking injury.

Willis’ left knee was damaged when he was cleared out at a ruck, just moments after the replacement flanker had scored the fifth of England’s six tries.

Jonny May plundered his 32nd international touch down on the stroke of half-time by leaping for the whitewash and grounding the ball from a mid-air horizontal position.

It was a remarkable moment of skill and ingenuity from one of the game’s most ruthless finishers, whose acrobatics swept him over a despairing tackle by Luca Sperandio and up one place in England’s all-time try-scoring charts.

Having moved above Ben Cohen and Will Greenwood into clear second, Rory Underwood’s total of 49 is the last remaining target.

A week after Scotland had claimed their first win at Twickenham since 1983, the most experienced England team of all time began the process of rebuilding their title defence with a predictably comprehensive triumph against the Six Nations’ weakest opposition.

Anthony Watson ran in two tries while Jonny Hill and Elliot Daly also crossed, but at times their play was scrappy and unconvincing, partly the result of Italy’s stubborn resistance and occasional flourishes in attack.

The Azzurri’s moments of promise were insufficient to prevent a 29th successive loss in the Six Nations, although on this occasion they were competitive if comprehensive losers.

Memories of the Calcutta Cup debacle came rushing back as England conceded two early penalties before leaking a try after only 144 seconds as Monty Ioane capitalised on some sluggish defending to race in.

They had been caught cold by Italy’s tempo with Watson and Daly at fault, but Owen Farrell settled nerves with a penalty as the setback made way for a spell of red rose dominance.

A short-range free-kick saw the ball retained in the pack and eventually the Azzurri cracked before the succession of pick and goes with Hill touching down.

Fly-half Paolo Garbisi was off the mark with a penalty that levelled the score and while they were still in the fight, territory and possession were slipping away at an alarming rate.

England’s back three were dwarfing their contribution against Scotland, with Watson the most effective carrier, and the Bath wing’s side-step and injection of pace swept him over in the 26th minute.

But for greater accuracy, Italy would have been in as they poured forward from a line-out as they impressively fought their way back into contention.

England ended the half strongly, however, and were rewarded when Sperandio went walkabout in defence and May crossed with a spectacular try that saw him leap into the corner.

Garbisi opened the second half with a penalty as Italy, helped by some mistakes from the home side, played with pace and intent exemplified by two eye-catching breaks.

It was therefore a blow when their best spell was ended by an ill-advised Garbisi pass that was cleverly picked off by Watson, who galloped 80 metres to score his second try.

Again Italy were stubbornly holding their own only to fall to England’s smarter thinking, caught unawares during a period of niggle and when camped on their line, Willis drove over.

Willis’ celebrations at scoring his second try were cruelly muted shortly afterwards when his leg twisted during a clear-out, causing an awful injury to his left knee that saw him driven from the pitch on the medical cart.

After a lengthy delay to treat Willis, England were caught cold as Tommaso Allan raced in from a scrum but Daly replied quickly thanks to a turnover by Maro Itoje, completing the rout.