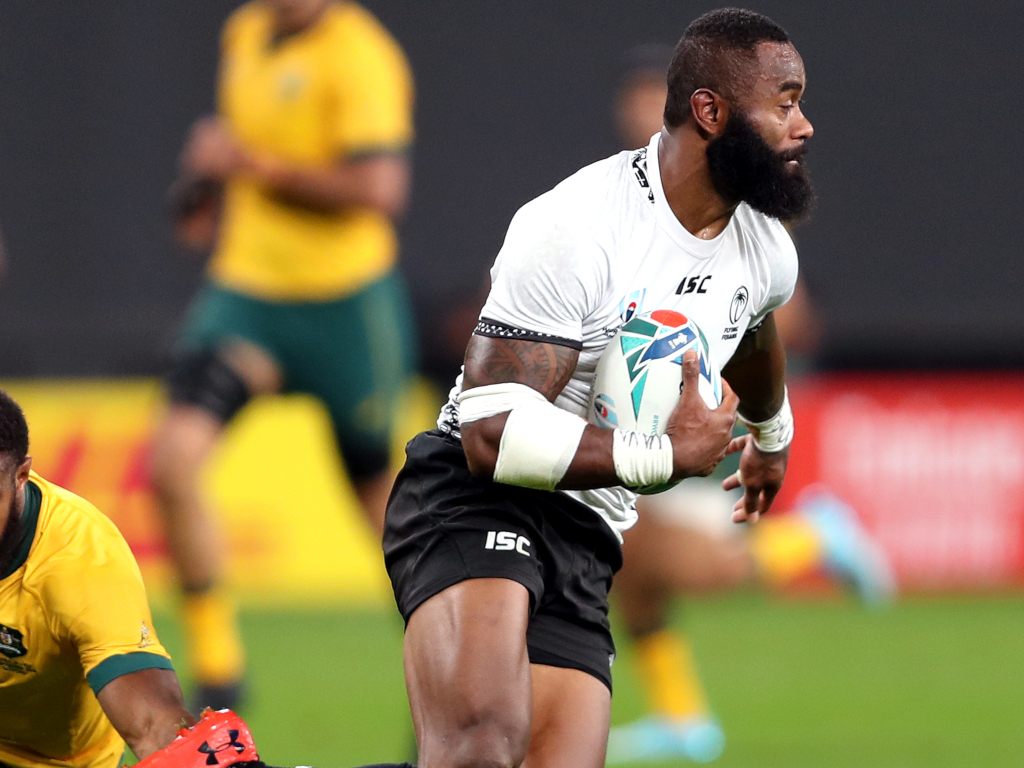 The Premiership continues on Saturday and Sunday as five matches take place, including the Midlands derby between Northampton Saints and Wasps.

Ted Hill will become the youngest captain in Warriors history when he leads out the side for the resumption of the 2019/20 Premiership season against Gloucester at Sixways on Saturday.

The England blindside flanker was appointed Warriors’ youngest-ever club captain last month and he will skipper the side for the first time against Gloucester in the absence of new team captain Matt Moulds who is recovering from foot surgery.

At 21 years and 142 days, Hill will become the fourth youngest player to captain a Premiership side with only Maro Itoje (Saracens), Alex Sanderson and James Gaskell (both Sale Sharks) ahead of him on the list.

Hill will captain a side that includes two of Warriors’ three new signings in former Wasps fly-half Billy Searle, who will make his debut, and England international back-row Matt Kvesic, who has returned to Sixways after an absence of seven years.

Kvesic had four seasons with Gloucester and three with Exeter Chiefs and will resume his Warriors career at number eight.

Melani Nanai has recovered from a shoulder injury that would have ruled him out of the last five months of the season had coronavirus forced a lockdown and starts at full-back.

Scott van Breda will make only his second Premiership start on the left wing and there are three potential competition debutants among the replacements in scrum-half Gareth Simpson, hooker Beck Cutting and loosehead prop Lewis Holsey.

Meanwhile, Gloucester will be captained by Lewis Ludlow, as Jonny May makes his Cherry and Whites return on the wing.

May is joined by fellow England international, Jack Singleton, in the matchday squad, who will make his first start at hooker. From the bench, Logovi’i Mulipola, Jack Stanley and Matt Garvey also look set to make their debuts for the club.

For the first return to action, Exeter boss Rob Baxter has assembled a powerful array of proven Chiefs talent. Of all the newcomers to arrive, only Scottish international Jonny Gray is afforded a starting role.

He will debut in the second-row alongside Jonny Hill, while fellow newcomer and compatriot, Sam Hidalgo-Clyne, is named amongst the replacements.

Elsewhere, the line-up has a familiar feel with England duo Ollie Devoto and Henry Slade in the midfield, Scottish captain Stuart Hogg at full-back, while Joe Simmonds skippers the side from fly-half.

Joe Simmonds, that is GLORIOUS 🙌

The fly-half brings up @ExeterChiefs' second try of the afternoon in style 👏 pic.twitter.com/T1GQ0Euowf

In the pack, it’s an all-English front-row of Alec Hepburn, Luke Cowan-Dickie and Harry Williams, whilst Sam Simmonds’ guile at number eight is perfectly complemented with the African might of Dave Ewers and Jannes Kirsten.

On the bench, there is the welcome sight of Tomas Francis back in action. The Welsh prop has not played since severely damaging his shoulder in Wales’ World Cup defeat to South Africa back in October of last year.

For Leicester, Steve Borthwick has included four of the club’s recent additions in his debut matchday squad to face Exeter at Sandy Park.

The Tigers head coach has named an all-international front row of Ellis Genge, Tom Youngs and Dan Cole with captain Youngs making his 150th starting appearance for the club.

In the second-row, Argentina international Tomás Lavanini is partnered by Calum Green, with Harry Wells included at blindside flanker. Tommy Reffell, who recently re-signed with the club, starts at openside and Jordan Taufua completes the pack at number eight.

England internationals Ben Youngs and George Ford are at half-back, with fly-half Ford named vice-captain for the trip to Sandy Park.

Scotland international Matt Scott makes his Tigers debut after his move from Edinburgh and is partnered in the midfield by South Africa international Jaco Taute.

David Williams, on loan from Championship club Nottingham Rugby, is included on the wing and will make his senior debut for the club. The 24-year-old graduated from the Tigers academy in 2014 and has previously represented Leicester in the ‘A’ League and Premiership Sevens.

Fellow graduates Jordan Olowofela and George Worth make up the back three.

New recruits Luke Wallace and Zack Henry are in line for their debuts after being named among the replacements, while 20-year-old back-rower Thom Smith could make his Premiership debut after two previous appearances in the Cup.

Internationals Jake Kerr and Nephi Leatigaga are joined on the bench by Joe Heyes as front-row replacements, with Hanro Liebenberg and Ben White also included.

Form: Exeter Chiefs have lost just once in the last four rounds of Premiership Rugby; 30-34 at Harlequins in Round 12. The Chiefs have been defeated just twice at Sandy Park in the Premiership this season, by Bristol in Round 4 and Sale in Round 9. Leicester Tigers’ last six matches in Premiership Rugby have all been won by the home side on the day whilst the Tigers’ only away victory in the league since October 2018 was at Newcastle in April 2019. Exeter have won their last four encounters with Leicester in the Premiership, with the Tigers’ most recent victory at Sandy Park being a 24-20 triumph in September 2014.

Bath captain Charlie Ewels will make his 100th appearance for the club on Saturday as the Blue, Black and White face-up against London Irish.

Stuart Hooper’s men will be looking to return to winning ways after suffering defeat to Exeter Chiefs last time out at Sandy Park, back in March.

Lewis Boyce, Tom Dunn and Will Stuart make up the front-row with Ewels and Josh McNally pairing at lock.

Bath introduce Ben Spencer to the starting line-up for the first time as the scrum-half makes his debut for the Blue, Black and White. The England international will link up with Rhys Priestland, who has a total of 111 points for Bath going into the final nine fixtures.

Ruaridh McConnochie and Semesa Rokoduguni start on the wide channels with Josh Matavesi and Jonathan Joseph looking to supply them with quick ball from the midfield and England international Anthony Watson completes the starting 15 at full-back against his former side.

Cameron Redpath is named on the bench and will make his Bath Rugby debut if he features.

Meanwhile, Harry Elrington, Motu Matu’u and Sekope Kepu make up the front-row for London Irish, with Ben Donnell and George Nott named in the second-row.

Matt Rogerson is at blindside flanker, with Seán O’Brien, who captains the side, at openside flanker. Albert Tuisue completes the pack, wearing the number eight jersey.

London Irish academy graduates make up the back three as Ollie Hassell-Collins and Ben Loader are named on the wings, with Tom Parton starting at full-back.

Form: Bath have lost their last two Premiership Rugby matches since beating Harlequins at the Recreation Ground on 22 February. Bath have lost twice at home in the league this season, to Saracens in Round 5 and Bristol in Round 12. London Irish have lost their last two Premiership encounters since beating Gloucester at Madejski Stadium on 22 February. The Exiles have won three times on the road this season, at Wasps in Round 1, at Northampton in Round 9 and at Harlequins in Round 10.  Bath’s only defeat to London Irish in any competition in the last decade was 22-29 at Reading in in September 2012 whilst London Irish’s last success at the Recreation Ground came with a 16-0 victory in the Premiership in November 2009.

Semi Radradra will make his Bristol Bears debut when the Premiership makes its long awaited comeback on Saturday as Saracens visit Ashton Gate.

The Fijian international is named in a mouth-watering line-up that includes nine internationals as Pat Lam’s men return to competitive action behind closed doors.

Hooker Bryan Byrne is set for his first start for the Bears too, while England duo Ben Earl and Kyle Sinckler are listed among the replacements and could make maiden outings from the bench.

For Saracens, Juan Pablo Socino will make his debut when Mark McCall’s men take on Bristol Bears this Saturday.

The Argentinian joined the Men in Black this summer and forms a midfield with Dom Morris, who scored last time out against Leicester Tigers.

Wing Alex Lewington crossed the whitewash twice in that game and is joined in the back three by Rotimi Segun and Sean Maitland.

Club stalwarts Richard Wigglesworth and Alex Goode line-up at nine and 10 with near 550 Sarries appearances between them.

💬 "There's an excitement at the club that we want to build again and take it to another level." 💬

A Saracen through and through 🐺, @Alex_goode0 describes why signing for a new chapter at the club is particularly exciting. #TogetherSaracens ⚫️🔴 pic.twitter.com/6vSYcLK2Tf

Mike Rhodes is set for his first runout in starting jersey this season after making his sole outing as a replacement before lockdown. Billy Vunipola and Jackson Wray take the other spots in the back-row.

Jamie George will captain the side from hooker alongside props Mako Vunipola and Vincent Koch, and Maro Itoje partners Callum Hunter-Hill in the second-row.

On the bench, front-row duo Eroni Mawi and Alec Clarey could make their Saracens debuts, as could scrum-half Aled Davies and centre Harry Sloan.

Form: Bristol Bears have won their last five Premiership Rugby fixtures, their best ever winning run in the history of the competition. Bristol have lost just one of their last 14 home games in all competitions; 21-26 to Wasps in Round 7 of the Premiership. Saracens’ only defeat in the last four rounds of the Premiership was 10-60 at Wasps on 21 February. Sarries’ 27-21 victory at Northampton in their most recent away game ended a three-game losing run on the road in Premiership Rugby.  Bristol’s only victory over Saracens in the league since 2008 was 23-21 at Ashton Gate in April 2019.

Director of rugby Chris Boyd has named his matchday 23 to take on Wasps on Sunday, with Northampton Saints’ league campaign finally set to resume after 163 days without rugby.

The men in Black, Green and Gold won 16-10 away at Worcester on their last Premiership outing before the unexpected hiatus, and boast a good recent record against this weekend’s opponents – winning two of the last three meetings in the league between the two.

Club co-captain Teimana Harrison leads out Northampton at Franklin’s Gardens in the number eight jersey and is joined at the back of the scrum by England’s Courtney Lawes and Lewis Ludlam, to create a back-row of international pedigree.

David Ribbans makes his first appearance since January having recovered from an ankle injury which kept him out for three months at the start of the year, and is joined in the engine room by Fijian international lock Api Ratuniyarawa.

Meanwhile hooker Mikey Haywood will run out alongside props Paul Hill and Francois van Wyk to round off Saints’ pack.

Wales fly-half Dan Biggar starts in the fly-half jersey for the hosts with Alex Mitchell stepping up to start at scrum-half alongside him hoping to pull the strings for Northampton, while English duo Piers Francis and Fraser Dingwall are selected in the midfield.

And Boyd has opted for a versatile back three, with Harry Mallinder and Ahsee Tuala starting on the wings and George Furbank at full-back, to create a trio capable of filling in across the park.

Meanwhile, Lee Blackett has named is first side as full-time head coach, as Wasps travel to Northampton on Sunday in Round 14 of the Premiership.

There are two potential debutants in the 23, as Ben Vellacott and Ryan Mills are named amongst the replacements.

Form: Northampton Saints’ four-game losing run in Premiership Rugby ended with their 16-10 victory at Worcester Warriors in Round 13. The Saints have lost their last three encounters at Franklin’s Gardens but have not lost four in succession in the Premiership at the famous old venue since 2006/07.  Wasps’ only defeat in the last five rounds of league action was 9-18 at Leicester on 15 February – that was Wasps’ only away defeat in any competition since early December.  Northampton have won two of their last three Premiership Rugby fixtures against Wasps, immediately following a run of six successive defeats stretching back to 2015. Wasps’ only victory at Franklin’s Gardens in the last five years was 36-17 in November 2018.