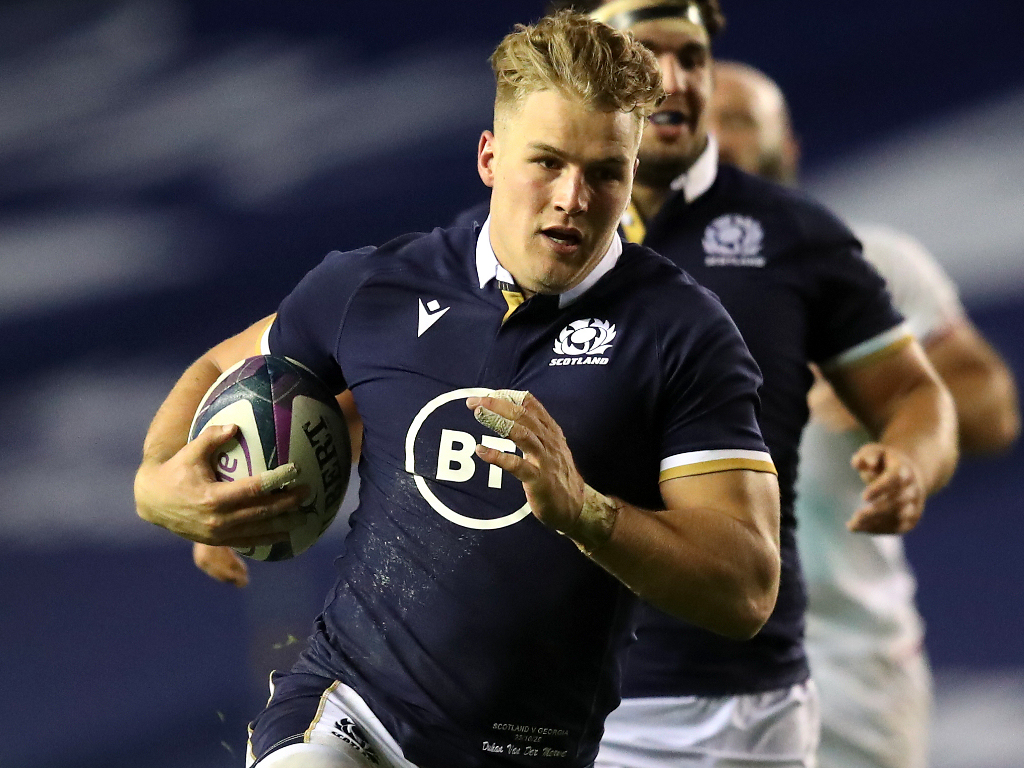 Scotland flyer Duhan van der Merwe is aiming to improve as a Test player after making his debut for his adopted country against Georgia at Murrayfield on Friday night.

The South African-born wing marked his first cap with a try as Scotland beat Georgia 48-7, running on to Finn Russell’s pass to get the home team’s sixth try of the game.

The 25-year-old’s introduction to Gregor Townsend’s team has been long anticipated after bagging 31 tries in three years with Edinburgh before qualifying for Scotland under residency rules.

Van der Merwe is now very much in contention for a Six Nations debut against Wales on Saturday.

“It obviously makes it very special, scoring on my debut,” said the former South Africa U18 international.

“Finn was actually saying, ‘just run on my inside’. I did and he put me away.

“It was a very emotional day for me, getting my first cap for Scotland. I came to Edinburgh in 2017 and three and a half years later I am a completely different player. I enjoyed it and it was very special.

“I was nervous but Gregor told me just to go out and do my thing. I’m obviously going to be nervous getting my first cap but now that is out the way I will lose a bit of nerves and hopefully just get better.

“It was a bit different, I felt very marked and didn’t have much space. I just have to work around that and find ways to beat guys.

“We spoke about getting myself on the ball more than 10 times and that was my mission going into the game. I might just have been short but don’t tell Gregor.”

Van der Merwe enjoyed a special moment after the game as he and Oli Kebble were presented with their first caps while Russell collected his 50th.

“So that made it very special. Our captain, Fraser Brown, gave me my cap.”

✍️ The report following their victory over Georgia. #SCOvGEO 👇 https://t.co/NKwmzYMzVq

The gesture continued a warm welcome into the Scotland fold.

“I obviously came into a new environment and didn’t know what to expect,” he added. “But the Scotland camp is amazing.

“You know what it’s like playing for Edinburgh against Glasgow, so I was wondering what the boys were going to be like, but they have been amazing.

“The build-up to the game has just been awesome and a very nice experience for myself.”