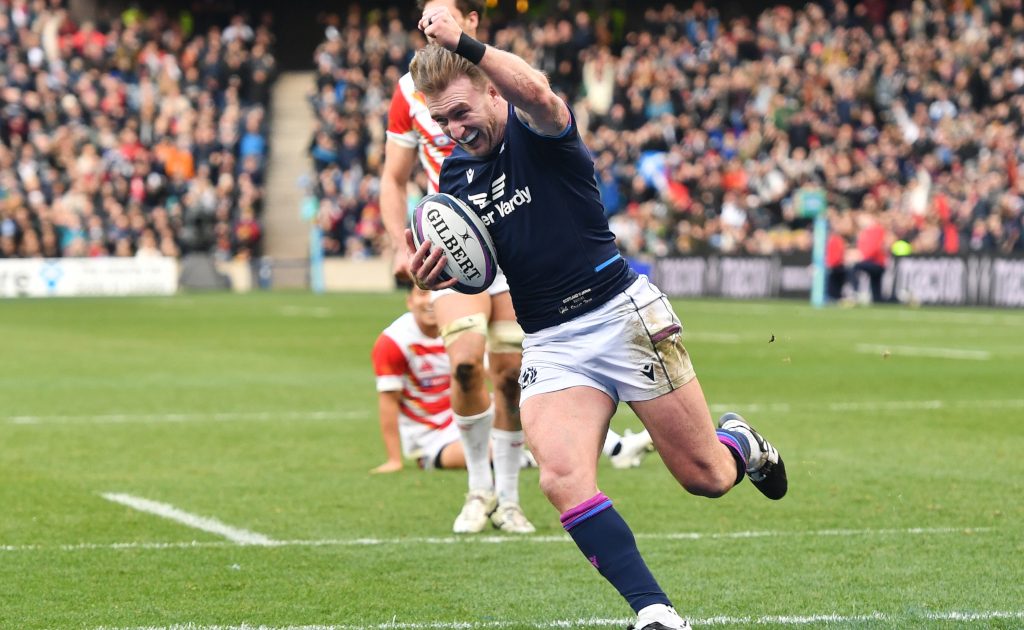 Scotland full-back and captain Stuart Hogg does not believe his try-scoring record will last for long due the talent that is in the system.

The Exeter Chiefs player touched down for a 25th time in Scotland’s 29-20 victory over Japan, eclipsing the feat set by Ian Smith and Tony Stanger.

Although Hogg still has plenty of time to add to that tally and potentially set a daunting target for those to follow, the 29-year-old thinks it will be beaten comfortably.

“I’m chuffed to bits with it,” he told the Rugby Union Weekly podcast.

“I was battling it out with Tommy Seymour for years because he would overtake me and then I’d go in front of him. So we were always going to go for that record.

“Ian Smith had it way back in the 1930s and Tony Stanger levelled it in the 1990s. In between then just shows how bang average we’ve been in only getting 25 tries.

“We want to play wide, expansive rugby – method in the madness we call it – and we are going to be in positions to score tries. So I have no doubt this record will be broken numerous times over the next few years.

“There’s boys close to being in and around it already and boys who score tries for fun in our squad. I’m lucky that Duhan van der Merwe only has 15 caps because he’s not far off beating me already.”

After a generally positive Autumn Nations Series, which included victories over Australia, Tonga and the Brave Blossoms but a frustrating defeat to South Africa, Gregor Townsend’s men have high hopes in next year’s Six Nations.

They secured impressive away wins against England and France in the previous edition and will look to win their first title since the final ever Five Nations tournament in 1999.

“We’re never going to be satisfied with what we’ve done,” said 29-year-old Hogg.

“We want to keep chalking up big wins. We’ve beaten England away, France away, Wales away, stuff we’ve struggled with for many years. It’s all about backing that up.

“That for me was one of the best squads I’ve ever been involved in with Scotland. And that will be 10 years come February.

“I never want to be one who’ll scream and shout about what we’re going to do. But I truly believe we are in a position to win a Six Nations if we get everything right. By that I mean we need to perform both sides of the ball in every single game.”