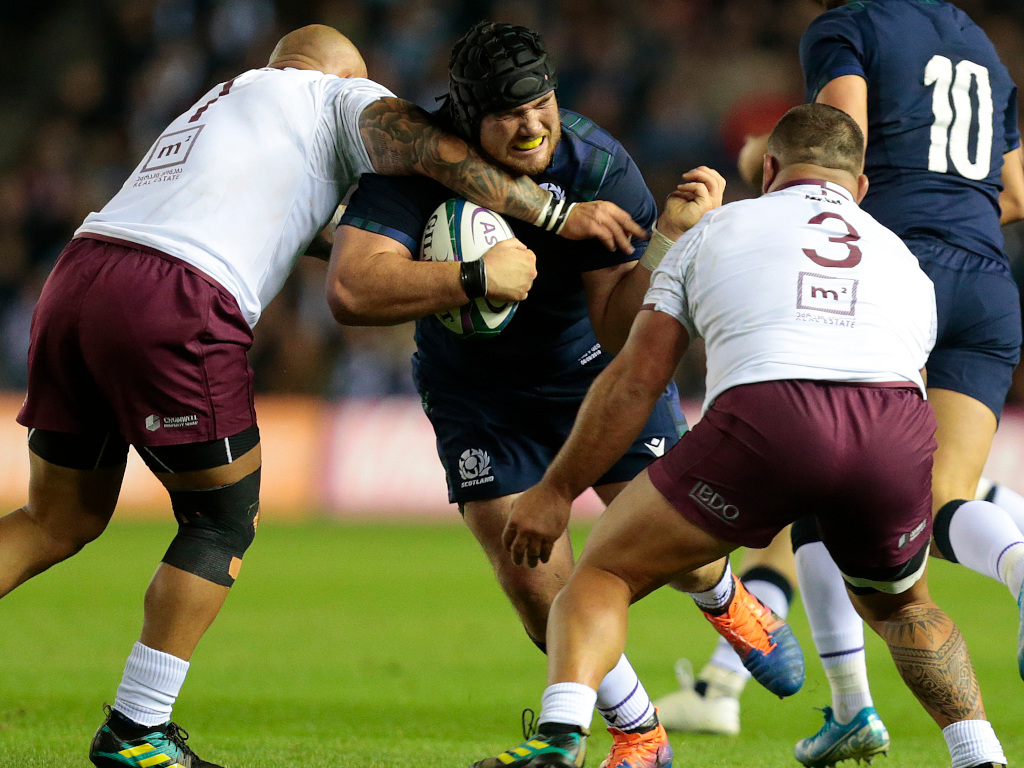 Scotland will kick off their year-end Tests against a Georgia outfit looking to impress at the top table of international rugby over the coming weeks.

The match will be a warm-up ahead of next week’s Six Nations finale against Wales so the Scots will look to gain momentum before that Llanelli clash.

For Georgia this is a landmark period as following Friday’s away game their focus will be on facing several Tier 1 sides in the Autumn Nations Cup.

It’s been several years of pushing and rejection for the Lelos as they have looked to join the Six Nations and they will know that consistently strong performances in October, November and December will do their case the power of good. In contrast, heavy defeats might hurt their long-term aspirations in the game.

The two teams have met on four occasions in the past, with Scotland winning each game, starting with their clash in 2011. Their most recent meeting was September 2019 when Gregor Townsend’s men won 36-9, with Darcy Graham, George Horne, Pete Horne, Sam Johnson, Blair Kinghorn and Ali Price all crossing.

Once again it’s hard to see anything but a victory for the Scots and they are boosted by the eligibility of one of the PRO14’s best players over recent campaigns, Duhan van der Merwe. The hulking South African-born wing deserves to play international rugby and is likely to hit the ground running at Murrayfield.

There is also a change in the leadership role under Townsend as the head coach has given hooker Fraser Brown the captaincy for the first time. The Glasgow Warriors forward will lead out the Dark Blues on his 51st appearance for the national outfit as he stands in for Stuart Hogg, who is on duty with Exeter Chiefs.

Ahead of Friday, Brown has been hailed by Scotland boss Townsend, who rates his current Warriors form up there with the best he has seen from the player.

He said: “We were thinking about what a great captain he has been for Glasgow and he’s in the form of his life. We’re just looking for him to continue that.

“He is thriving in the role. He has come out of that lockdown period in fantastic physical shape and he is a top-quality, experienced player,” Townsend added.

For Scotland: As mentioned already, the international bow of Duhan van der Merwe will be one to keep an eye on. The Edinburgh wing has been outstanding both domestically and in Europe and should relish his big chance this Friday, with Scotland surely planning on getting him involved as much as possible. If they can get the ball in his hands on the front foot then Georgia will find it difficult to contain him and that should lead to a solid debut.

For Georgia: The retirement of Georgian rugby legend Mamuka Gorgodze leaves a sizeable hole in their squad which needs filling. Otar Giorgadze has already established himself in their back-row but will be keen to add to his reputation in the coming weeks and he starts on the blindside flank for this fixture. Giorgadze is a powerful operator and at 24 years still has age on his side. Expect his international reputation to sky rocket this year.

Head-to-head: We look at the hookers here where two experienced operators, Fraser Brown and Jaba Bregvadze, clash. It should be a physical and also dynamic tussle as Brown looks to continue his impressive Glasgow form despite the extra responsibilities he now has in the Scotland shirt. Captaining his country seemed an impossible dream back when he was starting out his professional career at Edinburgh. He was released by the club as two years of persistent injury worries threatened to derail his career hopes for good. But at Glasgow he has not looked back and is a well-rounded hooker, who will be looking to dominate his opposite number. However, Georgian mainstay Bregvadze is no pushover and has not let himself down at the Sunwolves. He, like his fellow forwards, will relish going up against their Scottish opposites.

Prediction: The European international season starts with what should be an entertaining game that has plenty riding on it. For Scotland their players will be battling for places ahead of the bigger matches to come while every Test is a platform for Georgia, who won’t lie down. Scotland to win by 18 points.