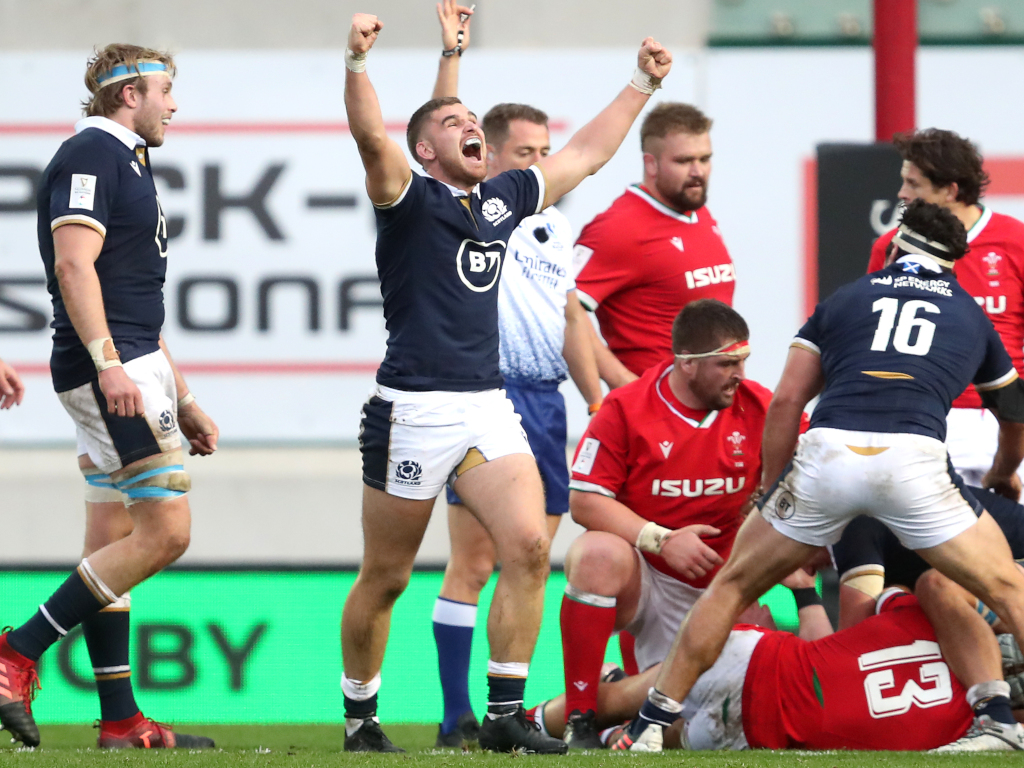 Scotland produced a solid display to emerge triumphant for the first time in Wales since 2002 following a thoroughly deserved 14-10 victory at the Parc y Scarlets.

It is their worst run of results since 2016, where they were also consigned to just one victory in the entire Six Nations campaign, to increase the pressure on head coach Wayne Pivac.

Finn Russell, whose return to Scotland’s starting line-up lasted just 33 minutes before he suffered a suspected groin injury, kicked a penalty, as did his replacement Adam Hastings, before captain Stuart Hogg’s 80th-minute strike finished Wales off.

Wales plundered a try for prop Rhys Carre, with Dan Biggar and Leigh Halfpenny each kicking a penalty, but Scotland deserved to take the spoils.

Wales suffered a late blow when flanker Justin Tipuric was ruled out due to due to tonsillitis, with Scarlets forward James Davies replacing him and Aaron Wainwright taking over from Davies among the substitutes.

Tipuric’s absence meant that Wales showed seven changes from the side beaten by France last time out, including a debut for Cardiff Blues flanker Shane Lewis-Hughes, but wing George North was dropped.

Russell returned for Scotland, handed a first Test start since last year’s World Cup after being omitted from the squad in January following a breach of team protocol, while Hogg and lock Jonny Gray were also back following their domestic and European double-winning exploits with Exeter.

A period of silence was held before kick-off to mark support for Rugby against Racism and to remember former Wales, British and Irish Lions and Llanelli wing JJ Williams, who died on Thursday, with the Wales players also wearing black armbands as Jones led them out.

Russell had an immediate chance to open Scotland’s account, but he drifted a 35-metre penalty chance wide before making amends eight minutes later as the visitors moved 3-0 ahead.

Wales, as they had done against France eight days ago, encountered early lineout and breakdown issues, and they could make no impact during an error-strewn opening 15 minutes.

Scotland continued to dominate territory, and they almost broke through when Hogg created space, but his pass failed to find centre Chris Harris with Wales’ defence stretched.

Scotland’s cohesion and general accuracy proved impressive in the blustery conditions, and it took Wales 30 minutes before they entered the Scottish 22, but their reward was immediate.

Hooker Fraser Brown got his radar wrong, overthrowing the ball at a lineout, and the Wales forwards capitalised, with Carre touching down and Biggar converting for a 7-3 lead before Russell departed and Hastings kicked a penalty on the stroke of half-time.

Wales also lost their fly-half to injury, with Biggar going off just three minutes into the second period and being replaced by Rhys Patchell.

There was a greater urgency about the Wales forwards after the break, yet the home side continued to be frustrated by a penalty count that reached double figures against them by the 50-minute mark.

And Scotland went ahead in the 61st minute when an attacking lineout was driven at pace, crushing the Wales defence, and McInally touched down, giving Scotland a four-point advantage.

A Halfpenny penalty ensured a tense finish, but Scotland closed out the contest in a calm and composed fashion through Hogg’s late penalty to secure a notable victory.