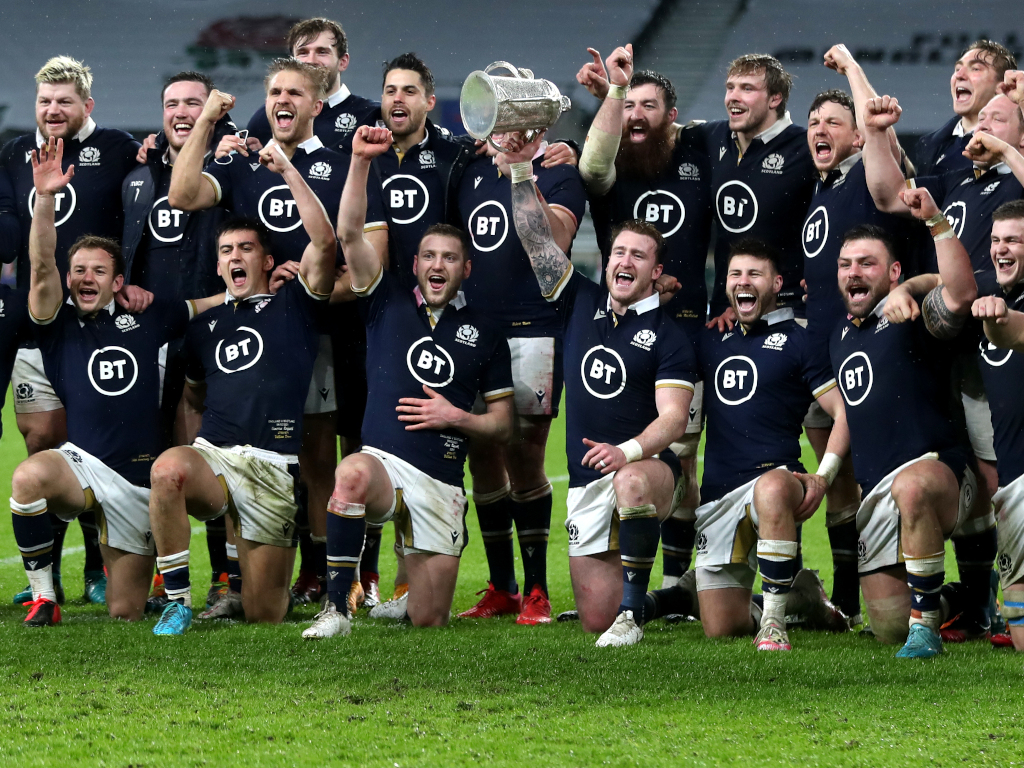 Scotland celebrated the 150th anniversary of the oldest rivalry in rugby by stunning England 11-6 to claim their first victory at Twickenham since 1983.

The 38-year wait for success at the home of the reigning Six Nations champions finally came to an end as Finn Russell inspired the underdogs to a magnificent win.

Russell directed play masterfully, Cameron Redpath enjoyed an influential debut and Stuart Hogg was world class at full-back as strutting Scotland were given the freedom to roam Twickenham.

But Scotland lacked the points to reflect their dominance, Duhan van der Merwe’s try as part of an 8-6 half-time lead an inadequate return given they had put England into a straitjacket.

Russell was at the heart of their brilliant display, keeping the home defence guessing with an array of kicks and passes, but there also were erratic moments, most notably a trip on Ben Youngs punished by a yellow card.

Lions coach Warren Gatland was watching from the stands and he will view the Racing 92 magician as a clear winner in his duel with Owen Farrell.

Scotland’s mastery of almost every department continued after the interval yet they struggled to make the impact on the scoreboard needed to kill off England, who were bitterly disappointing.

Almost a fifth of Eddie Jones’ team had not played since France were edged in sudden death 62 days ago and while the inactivity of the Saracens contingent contributed to the lack of intensity, England had more pressing problems.

Conceding four penalties in the first five minutes alone, one of them resulting in three points for Russell, led to a dismal start and the indiscipline became a debilitating theme of the match.

Twice Maro Itoje charged down kicks by scrum-half Ali Price inside the Scots’ 22 as the visitors invited pressure, but they were rare positive moments for the Red Rose.

A historic win at Twickenham! 🏆

The first time since 1983 😃#AsOne pic.twitter.com/qN8Gf1MQcQ

Redpath was already making his presence felt at inside centre, most notably by catching a long line-out throw and running hard into the heart of the home defence.

Russell was beginning to weave his magic with his passing already making a difference and there was another swing towards Scotland when he was chopped down by a swinging arm from Billy Vunipola, who was sent to the sin bin.

Showing no ill effects, Russell lofted the ball into the left corner where the bounce just deceived Van der Merwe, but soon after the wing’s powerful run swept him to the line and he was able to touch down.

The first half hour had been dominated by Scotland, but England clawed their way back into contention with successive penalties by Farrell.

Russell saw a yellow card for his trip on Youngs, his spell in the sin bin spanning either half, but when he returned the Scots were pounding away at the home line and he slotted a penalty.

Hogg weaved his way into space and the difference in attacking ability between the rivals was stark as England struggled to fire a shot.

Two huge touchfinders from Hogg pinned the champions back as rain began to fall, but the Exeter full-back was unable to land a long-range penalty that would have propelled his side eight points ahead.

It was not needed, however, as England could just not muster any meaningful response and Scotland’s players celebrated noisily when the final whistle blew.