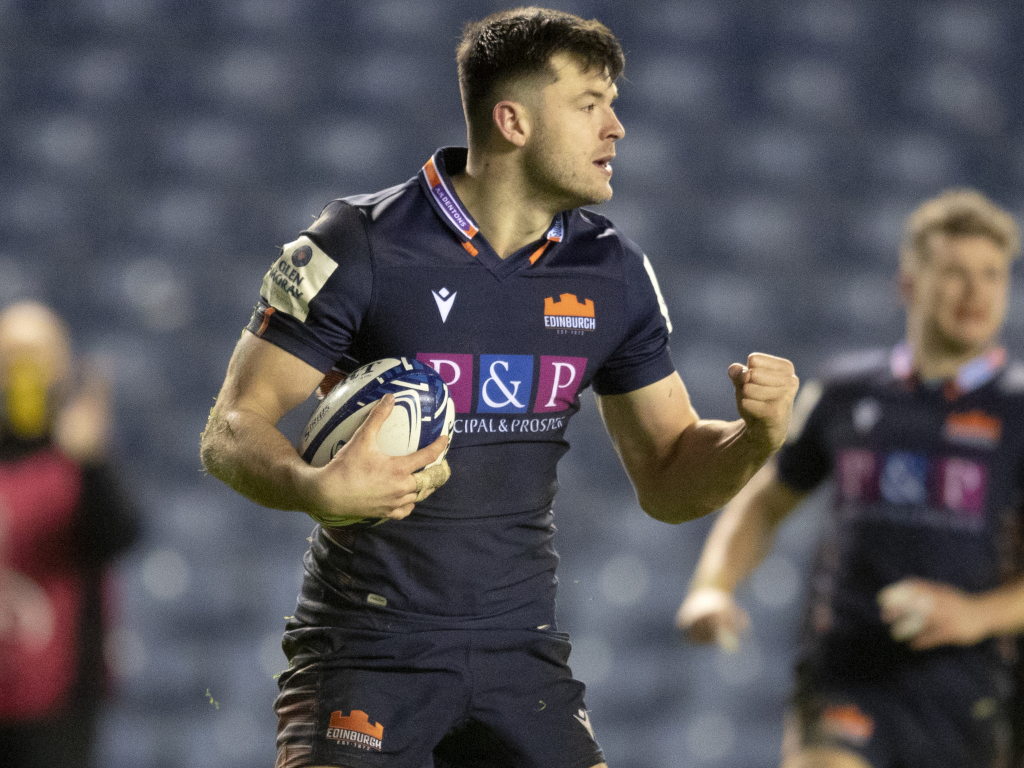 Edinburgh and Scotland outside back Blair Kinghorn celebrated his 24th birthday in style with a new contract extension at his hometown team.

The rangy runner first signed professional terms off the back of Scotland U20’s World Championship in 2015 and made his club debut later that season.

He enjoyed a breakout campaign under head coach Richard Cockerill in 2017/18 and finished the PRO14 campaign with the most metres gained in the league and a place in the end of season Dream Team.

He was then rewarded with his senior international debut in Scotland’s 2018 Calcutta Cup win over England at Murrayfield and scored Scotland’s first Six Nations hat-trick since 1989 in the 33-20 victory over Italy a year later.

The pacy back three player with a howitzer boot is now bearing down on club centurion status, with 94 appearances and 23 tries for Edinburgh and 25 caps and eight tries for his country.

He said: “I’m Edinburgh born and bred and I grew up supporting the club. The club really means a lot to me. It has a very special place in my heart.

“I was 18 when I first signed so re-signing as I turn 24 is a bit mad. It’s been a whirlwind of a journey. I’m still on the young side when we split into ‘youngies and oldies’ in training but I might get pushed to the oldies soon, given the number of young guys coming through.

“I’ve always played here and love representing the city. The pinnacle of that will be when we get into our new stadium and the fans are allowed back in. I think that day will really show how much the club means to the fans, how much the players care about representing them, and how much they mean to us. It’s really something to look forward to.

“My goals personally are to keep developing to the best of my ability, keep getting better every day and every week, and keep striving for success with the club.

“It’s a challenging environment and there’ll always be change, but we’ve managed to sign and re-sign some really great players, which is great news for Edinburgh.

“I think the future is really bright. I think the squad we’ve developed – and continue to develop – is really exciting.

“I feel like we’re capable of pushing on for greater things and I want to be a part of that.”

Kinghorn is the third Scotland international to extend their contract with the capital club in the past fortnight – following Hamish Watson and Jamie Ritchie – on top of two confirmed new arrivals so far: Scotland centre James Lang and Jedburgh-man Glen Young (second-row) from Harlequins.

Head coach Cockerill added: “We’ve enjoyed bringing supporters some good news these past couple of weeks as our plans for the future continue to take shape.

“Blair is a local lad come good, which is always nice to see. He’s also a gifted athlete who’s developed into fine rugby player over the past few seasons with us, and continues to get better.

“He’s racked up an impressive number of appearances and tries for club and country for someone so young and is a real asset to us in the back-field, particularly in a counter-attacking sense.

“He’s regular starter for us and sets a good example for those coming through on what it takes to achieve that. It’s fantastic he’s staying with us.”