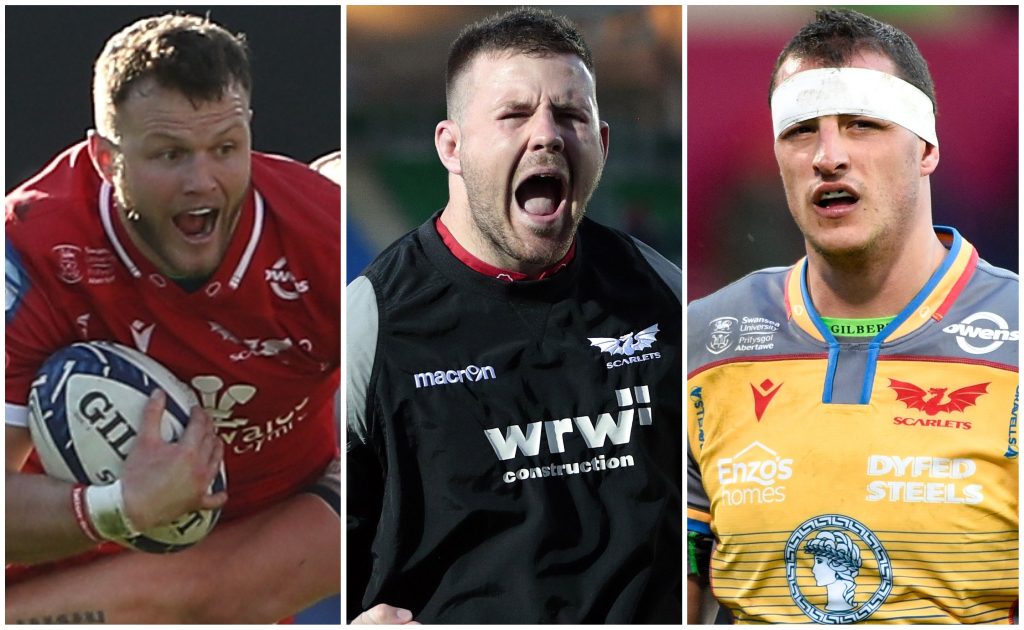 There are two matches scheduled to take place on Friday in the inaugural United Rugby Championship season with the Scarlets and Glasgow Warriors taking on Benetton and Leinster respectively.

Three Scarlets players will hit major milestones when they take the field in Friday’s United Rugby Championship Round Five clash with Benetton at Parc y Scarlets.

Aaron Shingler will make his 200th appearance in a Scarlets jersey, Rob Evans his 150th, while Steff Hughes will celebrate a century of matches.

The trio are part of a much-changed starting line-up following last weekend’s defeat to Leinster in Dublin.

With 10 players on Wales international duty, there are five changes behind the scrum with only full-back Ioan Nicholas and wing Ryan Conbeer remaining from the backline that ran out at the RDS Arena.

Steff Evans is restored to the left wing berth, while Scott Williams and Steff Hughes will combine in midfield. Scott has recovered from the eye injury he picked up against Munster and will captain the side.

Dan Jones and Dane Blacker, who will make his first start of the campaign, link up at half-back.

On the bench, 18-year-old scrum-half Luke Davies, another product of the Scarlets academy system, is set to make his senior debut.

Meanwhile, Rhyno Smith starts in the number 10 jersey for Benetton after impressing in the role off the bench against Ospreys as the Italians bring a strong team to Wales.

Smith is joined in the half-backs by Dewaldt Duvenage, who also captains the side, while Ignacio Brex and Marco Zanon form the centre combination with Andries Coetzee lining up at full-back and Tommaso Menoncello and Monty Ioane the two wings.

In the forwards, Abraham Steyn starts at number eight with Sebastian Negri and Giovanni Pettinelli the two flankers while South African duo Carl Wegner and Irné Herbst line up in the second-row.

Up front, Hame Faiva packs down at hooker alongside Tiziano Pasquali and Thomas Gallo, who are the two props.

British and Irish Lions duo Zander Fagerson and Ali Price will return to action for Glasgow Warriors, after the pair were named in the starting XV for Friday’s clash with Leinster at Scotstoun.

Fagerson’s inclusion is the only alteration to the front-row, as the tighthead comes into the starting line-up to pack down alongside Jamie Bhatti and Johnny Matthews.

Rob Harley will make his first start of the season after being selected in the second-row alongside Richie Gray, the latter having stolen at least one lineout in each of Glasgow’s opening four fixtures.

Jack Dempsey comes back into the squad after missing the trip to Italy last weekend, with the number eight part of a triumvirate completed by captain Ryan Wilson and openside Rory Darge.

Behind the scrum, Duncan Weir partners the returning Price in the half-backs, having contributed seven points with the boot last weekend.

Sam Johnson comes back into the midfield at inside centre, which sees Sione Tuipulotu shift to outside centre after scoring his first try for the club in Parma last time out.

Rufus McLean – who leads the league in clean breaks and sits second for metres gained – is the only member of the back three to retain his place, with Kyle Steyn and Ross Thompson completing the starting XV.

The replacements see a trio of internationals provide the front-row cover, as Scotland duo George Turner and Oli Kebble are joined by Argentinian tighthead Enrique Pieretto.

Lewis Bean wears the number 19 jersey, whilst Matt Fagerson covers the back-row after missing last weekend’s win due to illness.

George Horne and Nick Grigg each rotate to the bench after starting in Parma, as does Cole Forbes, who starts amongst the replacements for the first time in his Glasgow career.

Scrum-half and captain Luke McGrath has Ross Byrne outside him in the number 10 jersey.

In the pack, Cian Healy starts at loosehead prop this week, with Rónan Kelleher (hooker) and Tadhg Furlong completing the front-row.

Ross Molony and Ryan Baird start in the second-row, with Caelan Doris, Dan Leavy and Jack Conan the back-row trio.

Dan Sheehan, who was named in an Ireland senior squad for the first time on Wednesday, is included amongst the replacements, as is Jamie Osborne, who was also included in the Ireland squad as a development player.