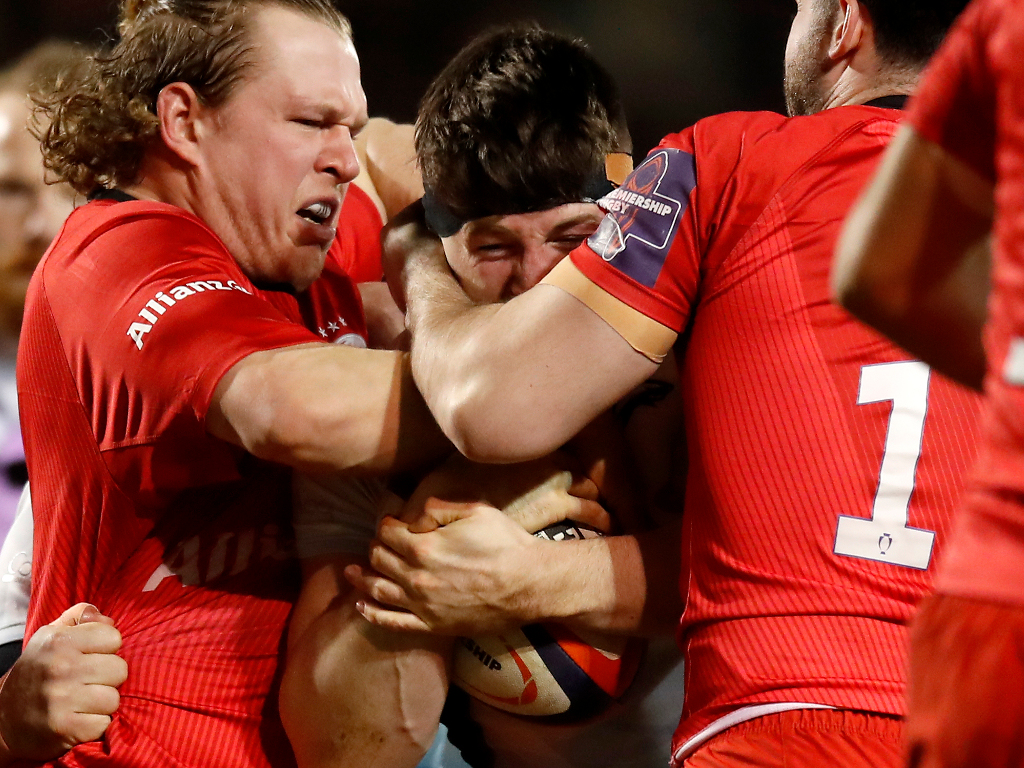 There’s four Premiership games scheduled for Saturday, including Saracens v Sale Sharks, with the round concluding on Sunday when Northampton Saints take on Bristol Bears at Franklin’s Gardens.

Hooker Joe Gray, who recently joined on loan from Saracens, is available for selection and will make his second Harlequins debut against London Irish, having previously played over 150 games for the club.

Set to return after a long injury lay-off is former Welsh international Scott Baldwin, with the 31-year-old hooker named as a replacement.

Premiership Player of the Month for January, Alex Dombrandt, starts at number eight alongside Will Evans and the explosive James Chisholm who captains the side at blindside.

The side includes three changes in the backs with Martin Landajo starting at scrum-half whilst Cadan Murley moves from the wing into centre with Tom Penny injured, and Ross Chisholm starts at 14.

Ben Meehan and Stephen Myler continue their combination at nine and ten with Terrence Hepetema and Curtis Rona in the midfield. Ollie Hassell-Collins and Waisake Naholo start on the wing with Ben Loader making his return from injury to start at full-back.

Ben Atkins, Allan Dell and Ollie Hoskins are the front-row replacements with Steve Mafi and Ben Donnell covering the second and back-row. Atkins and Donnell return for the break in the U20 Six Nations to be included in the matchday squad, with Dell returning from senior international duty with Scotland. Nick Phipps, James Stokes and Matt Williams will cover the back positions.

Here is the Tigers ?? side to take on @WaspsRugby ?? at Welford Road on Saturday afternoon in Round ?? of the #GallagherPrem season! pic.twitter.com/RRD4Ug9VbE

Back-rower Hanro Liebenberg returns to the Leicester Tigers line-up for their Premiership fixture against Wasps at Welford Road on Saturday.

Liebenberg is back to full fitness after injury and in line for his first appearance since the beginning of November as Tigers host their derby rivals.

He joins Jordan Taufua in the back-row for the first time, with Sione Kalamafoni at number eight.

Tigers are without five players with the England squad – Ellis Genge, George Ford, Jonny May, Manu Tuilagi and Ben Youngs – but Jonah Holmes returns to club duties from his commitments with the Wales squad.

Holmes joins Telusa Veainu and on-loan Rory Hughes in the back three, with Jaco Taute joining Kyle Eastmond at centre and academy graduates Tom Hardwick and Ben White continuing as the half-back pairing.

Guy Thompson and Calum Green are both still sidelined by injury.

Meanwhile, Jacob Umaga and Marcus Watson have been restored to the Wasps starting line-up for this game.

Umaga, who has been training with England’s Six Nations squad, is back in club action at fly-half while Watson has recovered from an Achilles knock to start at full-back.

The rest of the backline remains unchanged from the win at Worcester three weeks ago – while there is just one change to the pack from the side that played that day – as Thibaud Flament starts in the second-row in place of James Gaskell. The Wasps centurion has been sidelined with a foot injury and will be out for approximately eight to ten weeks, while hooker Tom Cruse misses out through illness and a calf knock.

Zurabi Zhvania (knee) and Brad Shields (foot) both return from injury to be named among the replacements and could make their first appearances since December’s trip to Edinburgh, while there’s also a place on the bench for 20-year-old centre Sam Spink, who last featured in November when he made his Premiership debut for the club against Exeter Chiefs.

Thomas Young and Dan Robson co-captain the side once again as the Black and Golds look to continue their recent league form – having produced try bonus-point performances in each of their last three outings.

This #ValentinesDay it's all about you, our fans 🖤❤️

A mixture of youth and experience will take to the field for Saracens when Sale Sharks visit Allianz Park on Saturday.

19-year-old Manu Vunipola returns from England U20s duty to take his place at fly-half meaning a switch back to full-back for Alex Goode – his first appearance in the 15 jersey since last season’s Premiership final.

Speedsters Rotimi Segun and Alex Lewington are named on the wings while captain Brad Barritt and Alex Lozowski make up the midfield.

Tom Whiteley comes in at scrum-half for his first start of the league season and will be behind a pack with four changes from the trip to face Sale in the Premiership Rugby Cup last time out.

Back from international duty with Wales, Rhys Carre takes his place at loosehead and South Africa international Vincent Koch is reinstated at tighthead. Hooker Tom Woolstencroft remains in the front-row.

Calum Clark and Jackson Wray are back at openside flanker and number eight respectively, joining Nick Isiekwe in the back-row and locks Joel Kpoku and Callum Hunter-Hill continue their partnership for the third match in a row.

On the bench, winger Ali Crossdale could make his first Premiership outing.

Meanwhile, Ben Curry will enter the record books this weekend as the 21-year-old becomes the youngest player to make 100 appearances for Sale Sharks after being named in the starting line-up.

Steve Diamond makes two personnel changes to the Sharks’ matchday 23 he named to face Saracens just eight days ago in the Premiership Rugby Cup semi-final, as Chris Ashton and Byron McGuigan return to the back three ahead of Saturday’s Premiership match.

Announcing his retirement plans this week, Rob Webber will make his final trip to Allianz Park as a player and after returning from Wales’ Six Nations camp, WillGriff John moves back into the starting line-up alongside Ross Harrison as the Sharks continue to consistently rotate their front-row options throughout the season.

The rest of the forwards remain unchanged for the trip to Allianz Park. Bryn Evans and Jean-Luc du Preez start in the second-row, with the formidable partnership of Jono Ross, Curry and last week’s man-of-the-match Daniel du Preez making up the back-row.

Will Cliff continues to demonstrate his electric form at scrum-half and partners up with Rob du Preez in the half-back roles. Rohan Janse van Rensburg and Sam James keep their spots in the midfield for the trip south, with a back three of Ashton, McGuigan and Simon Hammersley outside them.

Akker van der Merwe, Coenie Oosthuizen and Jake Cooper-Woolley make up an experienced replacement front-row, with Mark Wilson and James Phillips also named as forwards replacements. Phillips is set to make his 50th Sale Sharks appearance when he takes to the field.

📋 A first league start for Nick David in our @AcornsHospice Charity Matchday!#COYW

Nick David will make his Premiership debut for the Warriors against Bath at Sixways on Saturday.

The academy youngster has played much of his rugby at full-back but will start on the left wing against Bath.

David has made three senior starts this season on the wing in the European Challenge Cup and gets his Premiership debut in the absence of the injured Melani Nanai – who has been ruled out for the season – Ed Fidow, Tom Howe Perry Humphreys and Dean Hammond.

Utility back Scott van Breda will make his first Premiership start on the right wing in place of Humphreys (hip) as one of six changes to the side that faced Wasps three weeks ago.

Van Breda, who made two Premiership appearances off the bench last season, has had two spells on loan with the Southern Kings in the PRO14 this season.

The Warriors welcome back three players who have been involved in Six Nations squad sessions in recent weeks.

Du Preez won his seventh cap but first since he joined the Warriors from Edinburgh two years ago, as a replacement in the Six Nations opener against Ireland in Dublin.

Lock Andrew Kitchener has recovered from a shoulder injury and is named among the replacements.

Meanwhile, Bath number eight Zach Mercer returns to the Blue, Black and White starting line-up following four months on the sidelines for the trip up the M5.

Stuart Hooper has made seven changes to the side that beat Leicester Tigers 13-10 in Round 9 of the Premiership, including Tom Dunn and Taulupe Faletau, who return to Bath from their respective countries’ Six Nations squads.

Dunn is the only change in the front-row as they continue to impress this season. In a new back-row combination, Francois Louw returns to captain the side with Tom Ellis joining the Springbok on the flanks and Mercer making up the starting pack.

Will Chudley comes in at scrum-half to replace Chris Cook and Ruaridh McConnochie returns to action as the winger replaces Aled Brew.

Josh Matavesi will make his first start for the club as the utility back comes in at inside centre with Jackson Willison shuffling to outside centre.

Club co-captain Teimana Harrison will notch up his 150th Northampton appearance this weekend as Saints take on Bristol Bears, with director of rugby Chris Boyd making five changes to his starting XV for the Franklin’s Gardens clash.

The men in Black, Green and Gold sit second in the Premiership standings despite a frustrating loss to London Irish last time out – their first home defeat in the league this season.

But with the Bears coming to town this Sunday, Saints will be hoping to extend a superb recent record against the West Country outfit having won seven of their last eight meetings stretching back to 2008.

Harrison will lead out the hosts on his 150th appearance for the club, with several players returning for Northampton either from injury or international duty.

Scotland centre Rory Hutchinson will line-up in the centres alongside Matt Proctor, who starts his first match since December after recovering from a concussion.

Half-backs James Grayson and Cobus Reinach are selected together for the second game running, with the number nine in scintillating form at present having scored six tries in Saints’ last five matches.

Taqele Naiyaravoro keeps his place in the back three but Tom Collins and Harry Mallinder both come in to start, with the latter making his first Premiership appearance for 15 months.

There are two further changes to the pack as lock Alex Moon returns from England duty to partner Alex Coles in the engine room, and club co-captain Alex Waller is named at loosehead prop alongside Mikey Haywood and Owen Franks in the front-row.

Northampton’s back-row of Harrison, Tom Wood and Mitch Eadie remains unchanged in terms of personnel, but Boyd has shuffled the trio around with Harrison this week wearing number eight.

Amongst the replacements the headline returnee for Saints is scrum-half Alex Mitchell – who is in line for his first appearance in Black, Green and Gold since sustaining a knee injury playing for England against the Barbarians last summer – with Fraser Dingwall also picked on the bench after spending the last few weeks in camp with the Red Rose.

For Bristol, Charles Piutau makes his return from injury when they face the Saints on Sunday.

The full back is the only change to the side that beat Gloucester in round nine of the competition, as Bristol target back-to-back wins in the Premiership.

Yann Thomas is included in the 23-man squad after recovering from an Achilles injury, while Henry Purdy and Ian Madigan are also listed among the replacements.

Form: Northampton Saints’ 16-20 defeat at home to London Irish in Round 9 of Gallagher Premiership Rugby ended a four-game winning run in all competitions. That defeat was the Saints’ first at home in Premiership Rugby since April. Bristol Bears are undefeated in their last three first team matches whilst their victory at home to Gloucester in Round 9 ended a four-game winless run in Gallagher Premiership Rugby. Bristol’s only away win in the tournament this season came at Exeter in Round 4. Bristol beat Northampton 26-24 at Franklin’s Gardens in round 16 last season but have not won successive matches against The Saints since 2007.