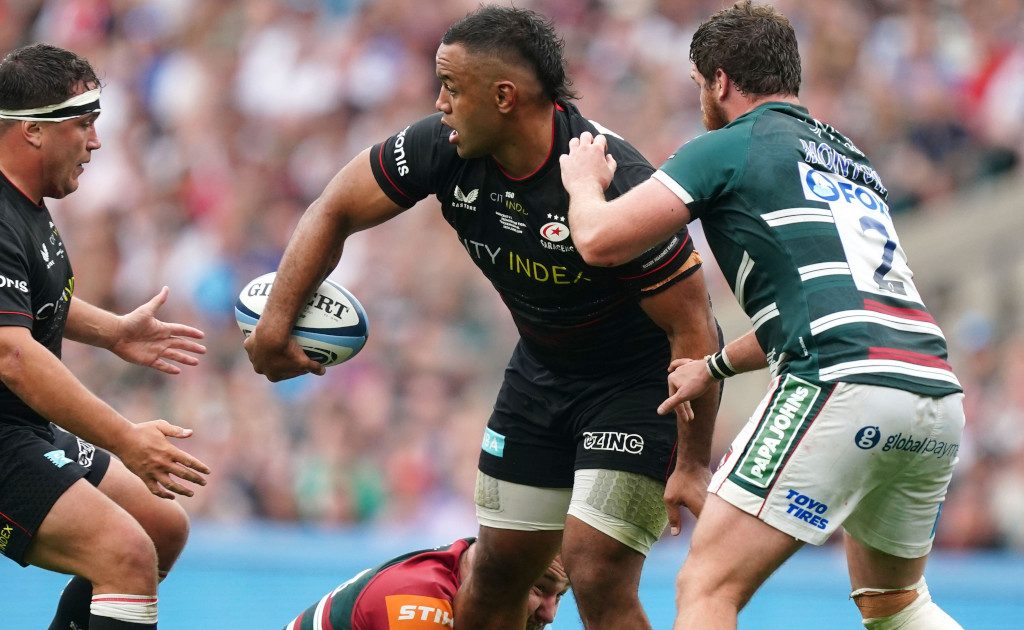 Following their 15-12 defeat to Leicester Tigers in the Premiership final at Twickenham on Saturday, here’s the player ratings for Saracens.

15 Alex Goode: Goode’s ability to return the high ball was quashed by the chase and coverage offered by the Tigers. Blame Freddie Steward for eliminating the former European Men’s Player of the Year. 6/10

14 Max Malins: Malins was solid in defence but received little action when it came to advancing the ball. A disappointing end to the season for one of the Premiership‘s best wingers. 5

13 Elliot Daly: Instrumental in attack, but not enough so. The England international nailed a superb long-range penalty to reduce the arrears at the 30-minute mark. 6

12 Nick Tompkins: Shrewd defence and penetrating carries from Tompkins matched with a great chemistry with Owen Farrell will leave England fans dreaming about what could have been. A true professional and master of his craft. 8

11 Sean Maitland: 40-minute outing before making way for Alex Lozowski contained a few crafty carries but nothing to write home about. 5

10 Owen Farrell (c): Was left stunned by Leicester who stole the perfect ending to Saracens’ first season back in the Premiership. He distributed well, fixing his runners with solid lines and smart passes. 7

9 Aled Davies: Davies was outshone by his predecessor Richard Wigglesworth ultimately. That being said, Davies serviced Farrell and the pack well with good tempo. 7

8 Billy Vunipola: The younger Vunipola was excellent, putting in a Gregory Alldritt-esque carrying performance for the men in black. There is still value to be had from the out-of-favour England eight. 8

7 Ben Earl: A complete contrast to last-week’s outing at StoneX Stadium as Earl was near silent. The defence was there, but the eye-catching impact was not. 5

6 Theo McFarland: McFarland drew the limelight from Earl with his determination and power as a carrier. The youngster continues to add to his CV of solid outings for Saracens. 6

5 Nick Isiekwe: A key piece to the Saracens lineout that saw minimal success, Isiekwe did little to plead his case to Eddie Jones. A quiet day for both members of the Saracens second-row. 5

4 Maro Itoje: Mature play to no avail from Itoje. The lock contested heavily at the breakdown without being a burden in terms of penalty yardage but failed to create much of an impact. 6

3 Vincent Koch: Koch’s last outing for the London side was one to forget with Genge getting the better of him at scrum-time. Luckily for him, Wayne Barnes didn’t recognise the struggles he had at the set-piece. 5

2 Jamie George: George is normally a super-star for the men in black but was an absentee on the field as Leicester imposed their will. 6

1 Mako Vunipola: A scrummaging veteran, Vunipola delivered in the set-piece on his 200th outing for McCall’s side and was also prominent in the loose. Sadly the double century day ended in vain. 7

Replacements: Andy Christie came on and performed well in the 20 jersey but other than that, little impact was to be had by the finishers. 6