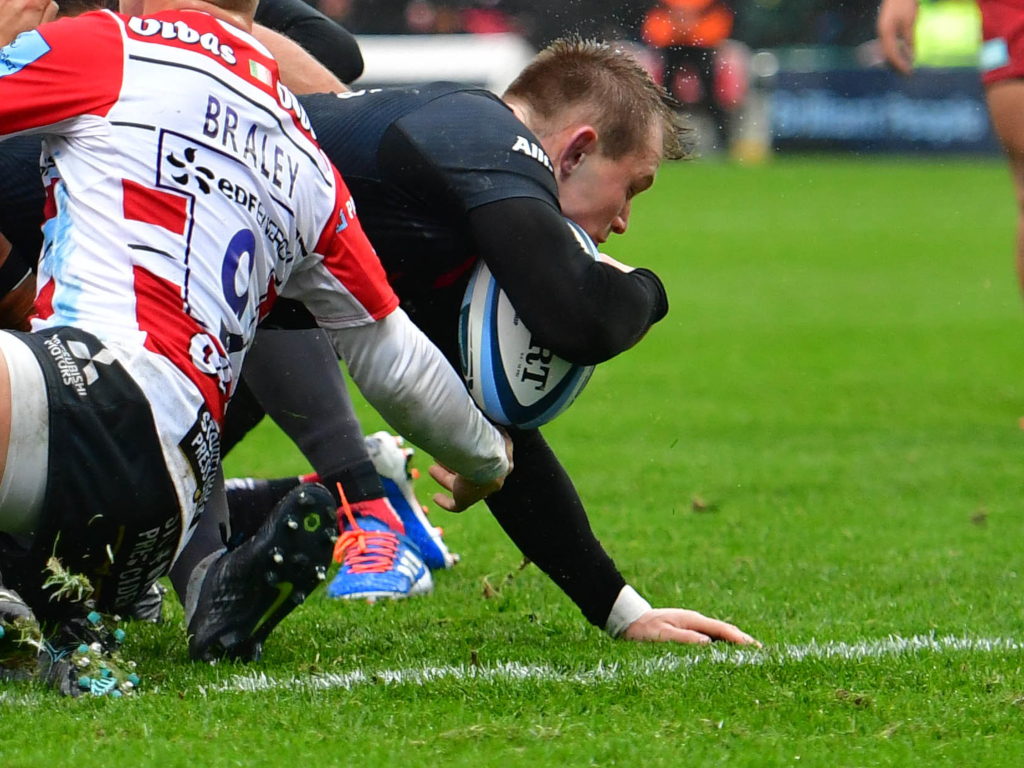 Saracens, who were punished for salary cap breaches earlier in the week, showed impressive resilience to defeat Gloucester 21-12 at Kingsholm on Saturday.

The London club were fined over £5million and deducted 35 points but the team seemed unaffected as it was business as usual for the reigning Premiership champions.

Saracens were greeted with a chorus of boos as they took to the field, with a group of home fans in The Shed waving fake money.

When the game started, the first penalty went against the visitors and the award was met with a loud rendering of, ‘Same old Sarries, always cheating’, which persisted throughout.

A 50-metre burst from Jason Woodward and an excellent raking kick from Danny Cipriani were the main features of the opening 10 minutes, which Gloucester dominated, but despite the concession of three penalties the visitors’ defence held firm.

Saracens were able to relieve the pressure with an excellent 50-metre touch-finder from full-back Matt Gallagher and then had the first chance for points but Vunipola pushed his penalty attempt wide.

A knock-on from Fraser Balmain gave Saracens a platform in the opposition 22 and, when Gloucester were penalised at the first scrum of the match, Vunipola gave his side the lead with a simple penalty.

That was the only score of an evenly contested first quarter but a poor cross-field kick from Cipriani soon gave Saracens another opportunity, which they took when Tompkins forced his way over from close range.

What a score for @gloucesterrugby!

Tom Marshall showing off some brilliant skills with his feet to take it from his own 22 to the try-line in seconds 🙌 pic.twitter.com/fvpL73B7IM

Gloucester responded with an excellent individual try from Marshall. Ben Morgan made 30 metres to put the defence on the back foot before scrappy passing saw the ball eventually reach Marshall.

He took his chance in style by evading one defender, chipping the full-back and then going on to win the race for the touchdown.

Cipriani missed the touchline conversion before two penalties in quick succession from Vunipola gave his side a 16-5 interval lead.

After the restart, Saracens lost prop Ralph Adams-Hale, who was stretchered off with a leg injury, but they looked to overcome this setback when Nick Isiekwe finished off a driving lineout only for the TMO to rule it out for an obstruction.

It mattered little, for almost immediately Saracens had another lineout and this time they made no mistake to get Earl on the score sheet.

Gloucester made wholesale changes which paid dividends as it allowed them to dominate the final quarter and they were rewarded when Ludlow forced his way over, but the hosts could get no nearer.

Super Saturday 👉 ALL OVER ⏰

14 men, no problem for @bathrugby, another big statement at home 🏟@WorcsWarriors clawed their way back into the game to claim a huge away win 💎@gloucesterrugby left it too late at Kingsholm ⏰

Elsewhere, Bath overcame the loss of Aled Brew to a red card to defeat Northampton 22-13 and hand the Saints their first loss of the season. The Midlanders had started well via Rory Hutchinson’s try, but the hosts hit back through Will Chudley’s effort and Rhys Priestland’s penalty.

It gave Stuart Hooper’s men a 10-8 advantage but they then saw Brew sent-off for a dangerous tackle on George Furbank. That should have given the momentum to the visitors but the West Countrymen responded superbly and won the game through Will Stuart and Zach Mercer, despite Tom Wood’s response.

Finally, there was a shock victory for Worcester Warriors, who came from 14-3 behind to defeat Harlequins 19-14. The Londoners opened the game well, touching down twice as Alex Dombrandt and James Chisholm both went over, but they didn’t score a point after the 14th minute.

Instead, Jono Lance eased the Warriors back into the contest with three successful penalties off the tee before Jamie Shillcock moved them in front. Quins were still in the contest, but Lance’s fourth three-pointer secured the win.