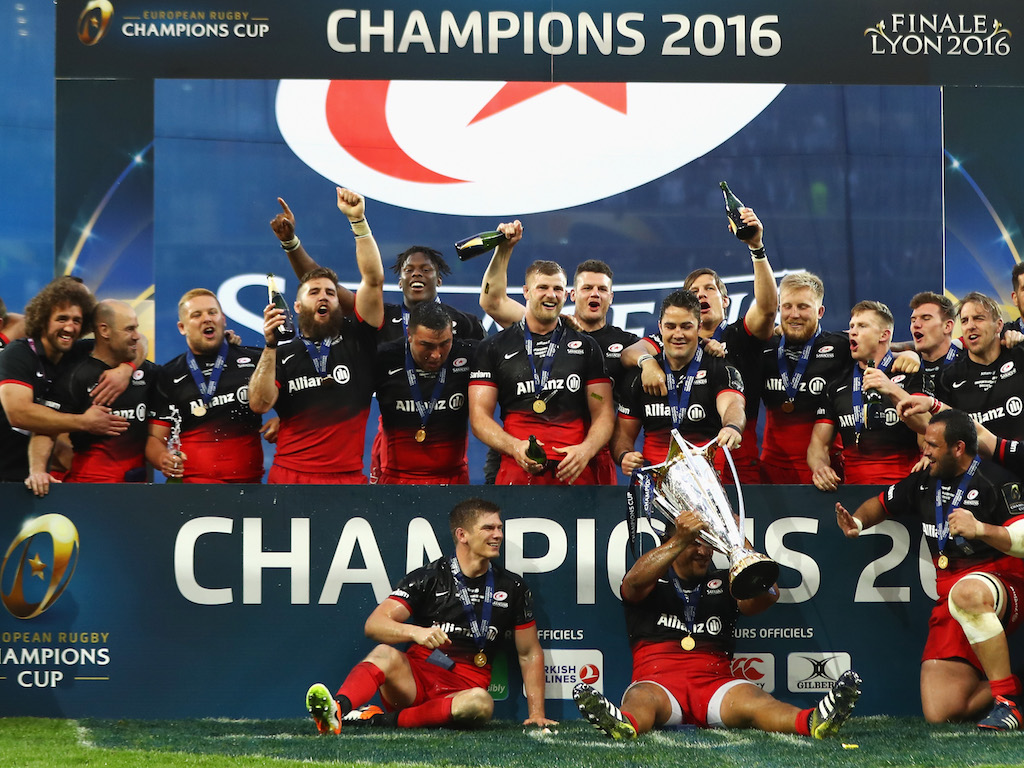 Saracens became champions of Europe for the first time after holding off Racing 92 to win 21-9 at the Grand Stade de Lyon.

Seven penalties from the boot of Owen Farrell were enough for Saracens to stay out infront for most of the match and to keep Racing at bay in a rain-drenched, tryless slugfest.

Dan Carter, Racing’s go-to man, was never truly fit – even the game’s greats can only do so much on one leg. His final was sadly over after 42 minutes and without both him and their other director Maxime Machenaud, who suffered a first-half concussion, Racing always faced an uphill struggle.

Saracens sensed this was their moment and pounced. Two years ago in their defeat to Toulon they were a little green, a little too nervous on the biggest stage. This time there were no jitters, as Saracens became the first side to go through an entire European campaign unbeaten.

All the little battles at the breakdown and set-piece went Saracens way, so too the kicking. Well almost, had it not been for a sublime display of tactical bootwork from the Racing full-back Brice Dulin.

As the clock headed into the final quarter Racing did what they could to create a surge in momentum, but the damage had already been done on the scoreboard. Much like Saracens two years ago Racing’s first final will be looked back on painfully.

They just couldn’t wrestle control away from a composed Saracens side who know how to close games out as well as the very best.

A scrum penalty set Racing up for an early attempt at the posts but Machenaud couldn’t find his range, as Racing opted to let him continue off the tee rather than hand the kicking duties to Carter who had missed just one in the competition prior to the final.

Instead it was Farrell’s smart grubber kick down the touchline which nearly supplied the first points. Dulin did enough however to keep out Ashton and to knock the ball to safety.

With the heavens opening every tactical kick became a key moment, a slammer from Dulin the best of the bunch to pin Saracens back as both sides battled for territorial dominance.

Raindrops weren’t enough to prevent Johan Goosen from tying the scores with a monster penalty – his effort from 55 metres out levelling matters at 3-3 towards the end of the first quarter.

Farrell attempted to restore the lead only for his drop goal to drift wide as Maxime Machenaud and Schalk Brits each went off for concussion tests within a minute of each other, with the level physicality steadily rising.

Showing some streetwise touches Saracens opened up a small gap on the scoreboard with two Farrell penalties to make it 9-3, their work at the breakdown and sharp kicking game pinning Racing back deep in their own half.

The French giants looked more comfortable once they were able to get the likes of Chris Masoe and Francois van der Merwe carrying hard around the fringes, with the result being a penalty for Goosen to knock over to cut the gap to three.

Farrell you sensed wouldn’t be denied, an enormous penalty strike from just inside the Racing half, awarded after a scrum penalty, meaning that Saracens held a 12-6 lead at the break.

That massive injury then stole the script at the start of the second half, with Carter able to do no more and forced to depart.

Saracens pounced, pinning Racing back with consecutive kicks to the corner as eventually the pressure told and Farrell landed penalty number five, making it 15-6.

Racing desperately needed a foothold and a foray into the Saracens’ 22 ended with a penalty for Goosen, cutting the gap to six, but they still needed more from somewhere.

Fatigue noticeably began to set in with the forwards tiring after so many collisions that a missed tackle or handling error threatened to settle the contest either way.

Saracens maul settled it, winning another penalty for Farrell to line up and send through the posts to make it 18-9. He did the same again two minutes later, now 21-9.

That was the knockout punch. Racing were left with too much to do in too little time as the clock wound down, with Saracens becoming the fourth English club to taste European glory. They utterly deserved it.

Man of the Match: Plenty deserved it – Fraser, Kruis and Billy Vunipola were all enormous, Wigglesworth and Farrell kicked superbly – but Maro Itoje‘s star just keeps on rising. He’s started 20 games this season, and won all of them. Remarkable.

Moment of the Match: That sixth penalty by Owen Farrell. Racing’s backs like Juan Imhoff can win a game out of nothing, but Saracens didn’t let them by killing the contest with those three points.

Villain of the Match: Nothing nasty to report.