Home Premiership Saracens bounce back with win over Newcastle 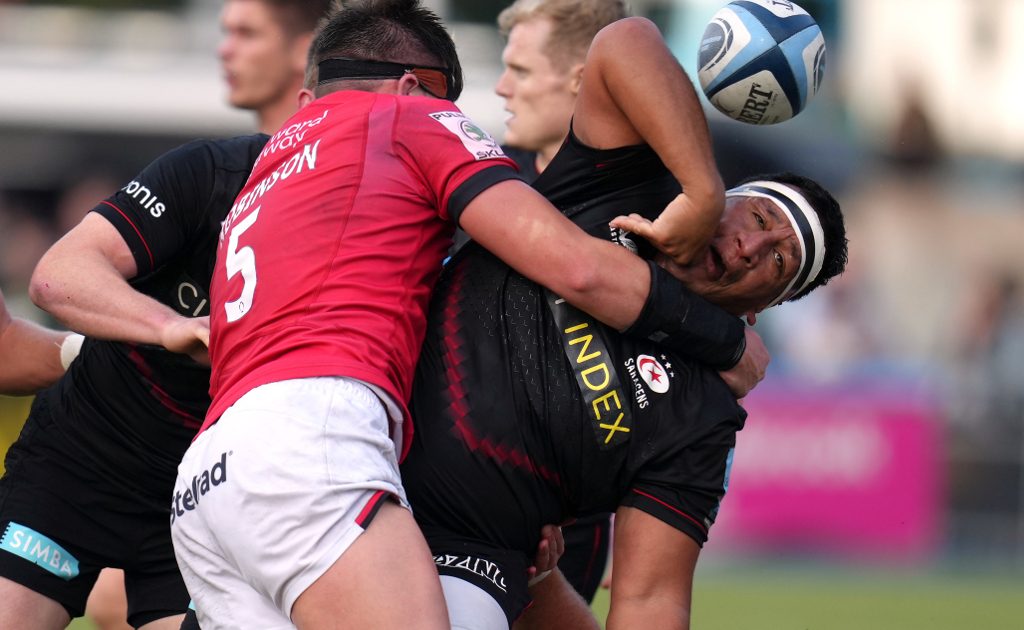 Jamie George and Mako Vunipola overcame their recent snubs by England to produce the decisive tries in a 37-23 Premiership victory over Newcastle at StoneX Stadium.

A week after falling to a late defeat by Leicester, Saracens were reeling as they made mistake after mistake to help Dean Richards’ visitors reach a commanding position.

But the five-time Premiership champions clawed their way back into contention through a penalty try and in the third quarter George and Vunipola struck from close range.

Neither score was pretty but the front rows delivered when their team needed them and from their newly established position of superiority, Saracens closed the game down.

Vunipola was making his first appearance of the season since returning from the Lions tour to South Africa and, alongside George, he has been overlooked by Jones for England’s initial autumn training squad.

And it was a third discarded England veteran in Billy Vunipola who claimed the bonus-point try in stoppage time.

Owen Farrell spent much of the first half warring with Newcastle players and in heated discussions with referee Ian Tempest but once play settled down he was able to kick 15 points.

Farrell drew first blood for Saracens but they committed a series of errors that invited pressure, starting with Sean Maitland being shown a yellow card for catching the head of Connon with his arm and continuing when Ben Earl dropped a simple catch deep in side his own 22.

Newcastle built from the field position and it was Brown who struck close to the posts as the home defence strayed out of position.

By the 20th minute the Falcons were 14-3 ahead and once against Saracens contributed to their downfall when Billy Vunipola had the ball stripped from his arms by the vastly smaller Connon.

It needed sharp reactions to capitalise on the opportunity in front of the posts and Newcastle leapt into action, feeding Stevenson who bounced off Dom Morris and touched down in the corner.

Saracens continued to implode, with lock Tim Swinson failing to ground properly, denying his side a try, before a line-out maul was brought to a halt when the ball squirted forwards.

And the errors compounded when they petulantly backchatted Tempest, who reversed a penalty which Connon sent between the uprights.

Finally Saracens made some headway shortly before half-time and when a maul was brought down illegally, Tempest awarded a penalty try and showed George McGuigan a yellow card.

The tide was turning and in the 48th minute George levelled the scores by taking a quick penalty and barrelling over the line, somehow getting the ball down despite three Falcons trying to stop him.

Newcastle’s earlier composure and accuracy had deserted them as Mako Vunipola emerged from the front of a line-out maul and marauded across the whitewash.

Farrell and Connon exchanged penalties but the closing moments were all about Billy Vunipola’s try from close range that clinched the five-point haul.

An impressive second-half kicking performance from George Ford maintained Leicester Tigers’ 100 per cent Premiership record this season and left London Irish still searching for their first win as they edged to a 21-16 success at the Brentford Community Stadium.

Irish’s winless streak in the Premiership now stretches to 10 games but Tigers return to the top of the table, having been briefly usurped by Harlequins following their Friday-night victory, with a fourth victory from four.

Given eight of Irish’s 12 Premiership tries this season had come in the second half, it was no surprise when Agustin Creevy dotted down on 55 minutes but three Ford penalties, in addition to his conversion for a total haul of 11 points, ensured the visitors hit back in style.

Gloucester clung on for a 33-32 victory after Sale’s remarkable late fightback came up just short at Kingsholm.

An under-strength Sale looked down and out as they trailed 33-15 with just over five minutes left but stunningly scored three late tries.

But replacement Tom Curtis was unable to convert the third from the touchline as hosts Gloucester scraped to victory.

Sale were missing half-a-dozen of their best side but contested throughout and outscored their opponents five tries to four.

Exeter moved into the top half of the table with a six-try 42-5 victory over disjointed Worcester, who were spared a first Premiership whitewash by a late Justin Clegg try.

Law trials were introduced this season designed to open up the game and make a staple of Exeter’s – the driving maul – loaded with risk.

It appears to have made no difference to the Chiefs, whose 21-0 interval lead was made up of three tries which followed penalties that were kicked to touch.

While none of them came via a driving maul, the first two, scored by back rowers Dave Ewers and Sam Simmonds, followed a series of forward rumbles close to the line.

The third was completely different and rewarded the bold decision of Exeter’s captain Henry Slade to keep play going after a penalty near his line with time up and Facundo Cordero was rewarded when he dotted down.

Early second half tries from Cordero and Simmonds and a late five-pointer from his younger brother, fly-half Joe, added to Worcester’s woes triumph while Slade (5) and the pivot slotted conversions to seal the Chiefs’ win.